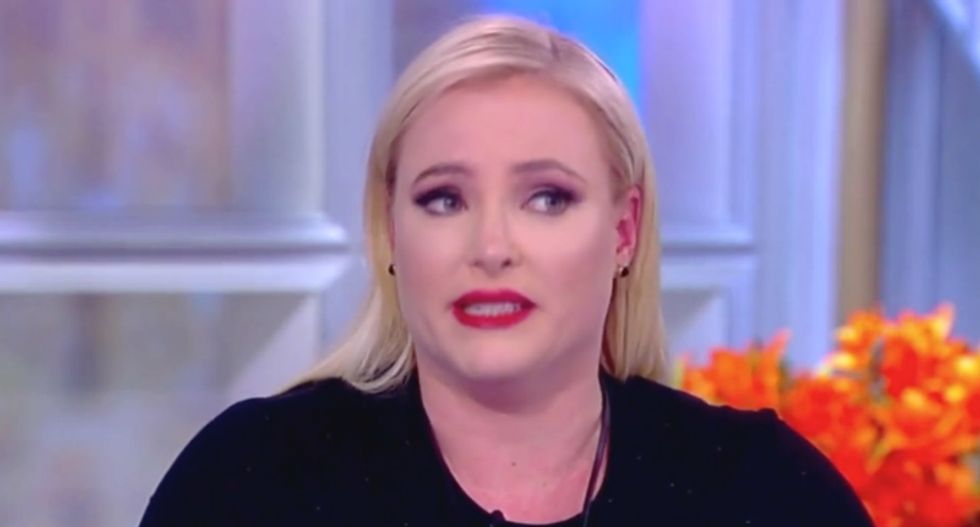 The View's Meghan McCain broke down in tears on Thursday after her accusations of anti-Semitism -- directed at Minnesota Democratic Congresswoman Ilhan Omar -- were rebutted by co-hosts Joy Behar and Sunny Hostin, whose grandfather happened to be Jewish.

"This issue is really intense one for me and just bear with me," McCain said. "Anti-semitism shouldn't be a left or right issue. I don't think we should be politicizing on either side because, as we know, if it's a tiki torch person in Charlottesville saying 'Jews will not replace us' or we had Bari Weiss talking about these more dog whistle moments, that in my view, Ilhan Omar is doing."

She accused Omar of not being able to go even two weeks "without saying something anti-Semitic" and said if a "white Republican male" has made similar statements, the reaction wouldn't be much harsher. In a rare instance, Behar and McCain agreed that Omar's comments were ugly, and that there were plenty of other countries in the Middle East with terrible human rights violations. But Hostin had a different take, saying that Omar's comments were being grossly misrepresented.

Citing Weiss's visit earlier in the week, Hostin reminded the table "I asked her is it okay to talk about Israel's policies and not be called anti-Semitic."

"She's not talking about you," replied Behar, as Hostin continued.

"This selective outrage is kind of crazy because I don't think that the Republicans have moral high ground here," continued Hostin, calling out vicious anti-Semitic tropes by House Minority Leader Kevin McCarthy (R-CA) and Ranking Member of the House Oversight Committee Jim Jordan (R-OH). "Remember that Ilhan Omar in the West Virginia Republican Party just had this huge poster superimposed with her face with 9/11 terrorists, and I haven't heard any outrage about that coming from the Republican Party."

"I take this very personally as a woman of color who has been the subject of so much bigotry. What a lot of people don't know is that my grandfather is Jewish, he was a Sephardic Jew," Hostin continued. "My family members have received a lot of bigotry, so, you know, I've experienced firsthand in my family anti-semitism and bigotry for being black."

"You have to admit, Meghan, that it is disingenuous of the Republican Party to go after her, her point, when they are backing a president who is in bed with dictators committing human rights violations all over the world," said Behar, as McCain started crying.

"I take this very personally," she said, her voice breaking. "I don't have family that is Jewish but Joe Lieberman and Hadas Lieberman are my family. I take the hate crimes raising in this country incredibly seriously, and I think what's happening in Europe is really scary and I'm sorry if I'm getting emotional."

"Just because I don't technically have Jewish family that are blood related to me doesn't mean that I don't take this as seriously," McCain went on, struggling to speak. "It is very dangerous, very dangerous and I think we collectively as Americans on both sides, and what Ilhan Omar is saying is very scary to me and very scary to a lot of people and I don't think you have to be Jewish to recognize that."