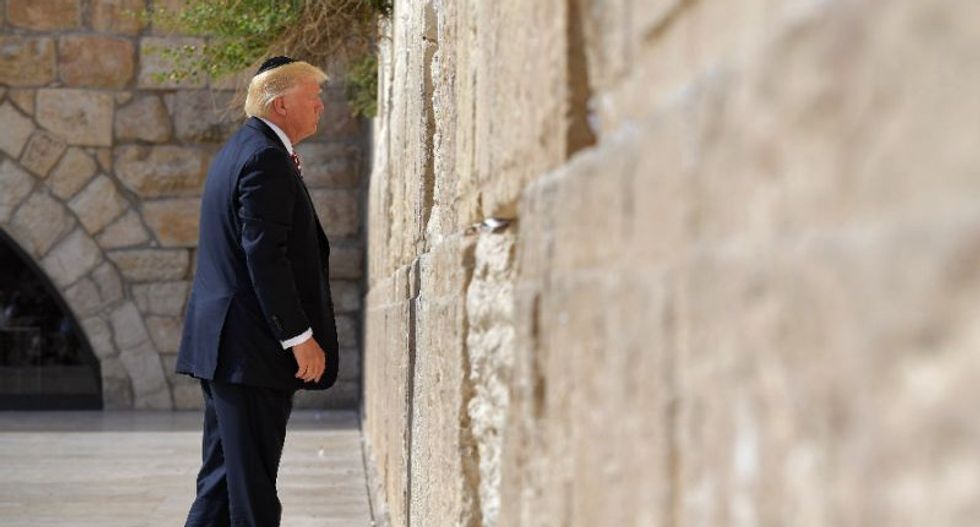 US President Donald Trump, pictured in Jerusalem's Old City in 2017, touted his controversial decision to move the US embassy to the city from Tel Aviv (AFP Photo/MANDEL NGAN)

A fringe "Jexodus" movement seeking to weaken US Jews' support for the Democratic party got a boost Friday from President Donald Trump, who said Republicans "are waiting with open arms."

The Jewish vote has long leaned solidly left but Trump puts major emphasis on his support for Israel's right-wing prime minister, Benjamin Netanyahu, and allies cast him as the most pro-Israeli US leader in history.

Trump's latest gambit is to promote a tiny, newly-created group called "Jexodus," which wants to lure Jewish voters to the Republicans.

In a tweet supporting the bid to encourage "Jewish people to leave the Democrat Party," Trump touted his controversial decisions to move the US embassy from Tel Aviv to the disputed city of Jerusalem and to withdraw from a carefully crafted deal over Iran's nuclear ambitions.

In an earlier tweet this week, Trump quoted the spokeswoman for "Jexodus," Elizabeth Pipko, who said that Democrats "don't care about Israel or the Jewish people."

Trump's decision to give the fledgling group so much publicity comes as Republicans try and take advantage of turmoil in the Democratic Party over recent comments by a congresswoman, Ilhan Omar, that some saw as anti-Semitic.

But in the 2016 presidential elections, Democratic candidate Hillary Clinton scored 71 percent of the Jewish vote to Trump's 24 percent.

Even Pipko, who is reported to be a former Trump White House staffer, seemed to question whether "Jexodus" will have much success.

Speaking on the "FOX & Friends" morning news show, a favorite of Trump's, she said her Jewish friends "never changed their minds" over supporting Democrats and "I don't think they're going to change."

His tweet calling for Jews to abandon the Democratic party came just after he tweeted an expression of sympathy for victims of mass shootings at two New Zealand mosques that killed 49 people.

One of the alleged perpetrators posted a lengthy statement expressing deep hatred for Islam.