Trump's emotional fragility forces him to 'fabricate reality' to hide from his inadequacies: Yale psychiatrist 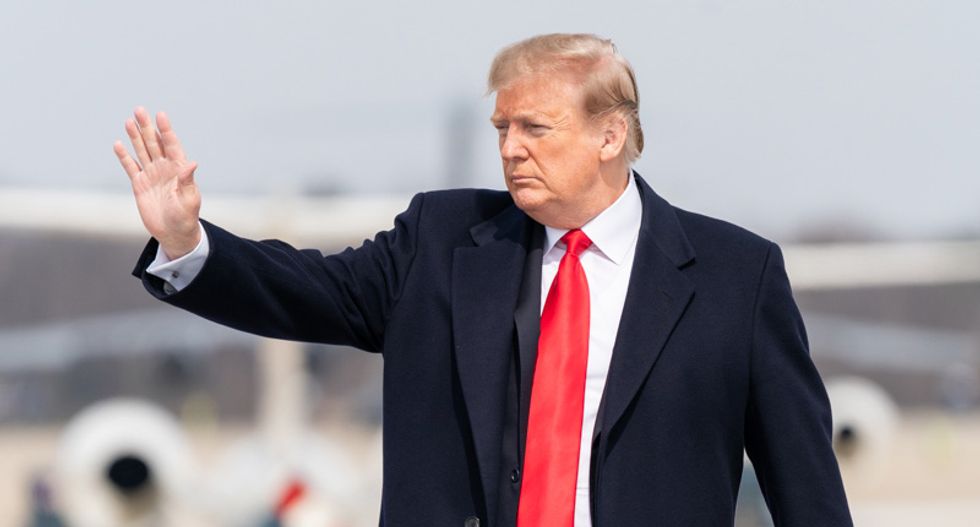 Special Counsel Robert Mueller's report found that there was not sufficient evidence for collusion between the Trump campaign and Russia. Nevertheless, the report pointedly noted that it did not conclude that Trump had not obstructed justice. Nevertheless, the President and his team declared victory.

Raw Story spoke with Dr. Bandy X. Lee, a psychiatrist at Yale School of Medicine who has taught at Yale Law School for over 15 years, about her observations of the President's reaction to the outcome of the Russia probe.  She has also consulted with the World Health Organization on public health approaches to violence prevention since 2002. She is the author of the authoritative textbook, “Violence: An Interdisciplinary Approach to Causes, Consequences, and Cures.” Her New York Times bestseller, “The Dangerous Case of Donald Trump: 27 Psychiatrists and Mental Health Experts Assess a President,” was re-released in an expanded edition last week, alongside a major, interdisciplinary conference on presidential fitness (for more information on the conference, go to: dangerouscase.org).

Raw Story: The Mueller report, according to Attorney General William Barr, found no evidence of conspiracy to collude with Russia by the Trump administration. Yet the report did not exonerate the President on obstruction of justice. Nevertheless, the President's response was to tweet out that he'd been fully exonerated. What accounts for the President's reaction?

Bandy X. Lee: We have seen on multiple occasions that he cannot tolerate the slightest criticism or even unpleasant realities to the point where he has to fabricate his own, declaring real news “fake” and repeatedly attacking all those who remind him of his inadequacies, even posthumously. This gives away his level of emotional fragility, and we can expect that he will aggressively overplay aspects of the report that favor him and underplay parts that do not. Hence, it is inevitable that whatever he says will be distant from reality, including “complete and total exoneration.”

The problem is, instead of containing his sickness, we as a nation have enabled it, allowing him to put in place individuals and structures that echo his distorted views, such as the new attorney general. This is what I meant when I said, since two years ago, that not treating mental impairment as a mental problem will cause it to become uncontainable—pathology coopts normal structures to destructive ends, not the other way around. We offer no benefit to Donald Trump, either, when we pretend he is a normal politician instead of offering proper treatment.

Raw Story: Trump called it an "illegal takedown that failed" and that someone should look at the other side. What do you think accounts for the President's seeming need for vengeance?

Bandy X. Lee: Whatever the results of Robert Mueller’s report, we know that, left to his devices, they would be put to grotesque abuses. In the past, he has over-exaggerated and imputed results that are favorable to him even when they are not there. How much more will he abuse the results now? From a healthy person’s point of view, the positive results might offer proof that it was not a witch hunt, that he need no longer feel so paranoid, but it is unlikely he will take it this way. Rather, he will likely view it as a sign of weakness, “the best they could do” at taking him down, and thus a “safe” sign for him to launch a more full-blown attack.

He has always shown a pattern of hating Hillary Clinton for her capability above all else—for her having what he does not—which is why he was still mentioning her in his Conservative Political Action Conference speech, over two years after he defeated her. He has been eager to push for another investigation of her, which has nothing to do with wrongdoing, of course—his own daughter and son-in-law have offended just as much—but his inability to extinguish the feeling of utter inferiority, of which she is a reminder.

Raw Story: Although he's been cleared on the specific charges of conspiracy to collude with Russia, Donald Trump is still being investigated on a number of fronts, most notably by the Southern District of New York. How do you expect him to react to other ongoing investigations?

Bandy X. Lee: Again, emboldened in his delusions of grandeur and impunity, he is more likely to attack all remaining investigations and less likely to cooperate. It was inevitable that he would grow more dangerous regardless of outcome, since this is what happens when we hand power to an impaired individual. It may seem like he is ingenious in his “tactics” or political ability, but we need to keep in mind that this is an impairment: the mind has many layers, and thus when the rational, conscious part is disabled, the more primitive but powerful parts take over, very effectively driving all to destruction—the sick willingly and the healthy despairingly, but toward destruction all the same. This is why we are in such a perilous situation, which was the topic of our multidisciplinary discussion last week.

Raw Story: Yes—how did your conference go? What were your conclusions?

Bandy X. Lee: A panel of leading scholars from across disciplines gathered from around the country at a historic, first-of-a-kind conference. It was a phenomenal event for those who attended, which C-SPAN recorded. The top minds outlined in stark detail the ways that the president’s mental impairment has impacted their respective fields. There has never been a time when so many leading experts gathered on one panel, I believe, not to mention the unprecedented topic.

You may recall that this occurred during an entire week of media fixation on the Twitter war between George Conway and the president over the president’s “mental condition.” While much attention was given to a non-expert legal professional’s words, a whole mental health organization was in DC at the National Press Club, seriously discussing the very topic, and getting little coverage. Albeit it is a difficult subject, we learned from trying to garner press attention that the American Psychiatric Association’s public relations campaign on the Goldwater rule was still causing reporters to hesitate. The APA’s distortion of an ethical guideline (that we educate the public but not diagnose a public figure) into a gag rule (that we never mention any aspect of any kind about a public figure, even in an emergency)—and publicizing an APA membership rule as if it applied to all mental health professionals—plays right into what tyrannies love to do: discount expertise and deprive the people of critical knowledge.

Since seeing a problem for what it is is half the solution, we are undaunted. I had stopped consulting with Democratic lawmakers, with the hope that Republican Congress members would reach out, but since they have not, I will compile the highlights of the conference and return to those lawmakers who initially expressed interest in our point of view. Jeffrey Sachs’ report on the world’s loss of confidence in the U.S., Richard Painter’s legal argument for impeachment, Ruth Ben-Ghiat’s historical lessons on authoritarianism, Jason Stanley’s insights into propaganda, Gar Alperovitz’s stark warnings against having “John Boltons” in charge, Scott Ritter’s turning from being a Trump supporter for fear of nuclear war, Jerrold Post’s explanation of the pathological leader-follower relationship, and Philip Zimbardo’s description of how Mr. Trump holds the nation prisoner—all are powerful confirmations of what we predicted years ago. No matter how sick a person is, if you can recognize you are ill and seek appropriate treatment, things can improve. As long as our nation is open to developing “insight,” it can come out of its current, dangerous course.