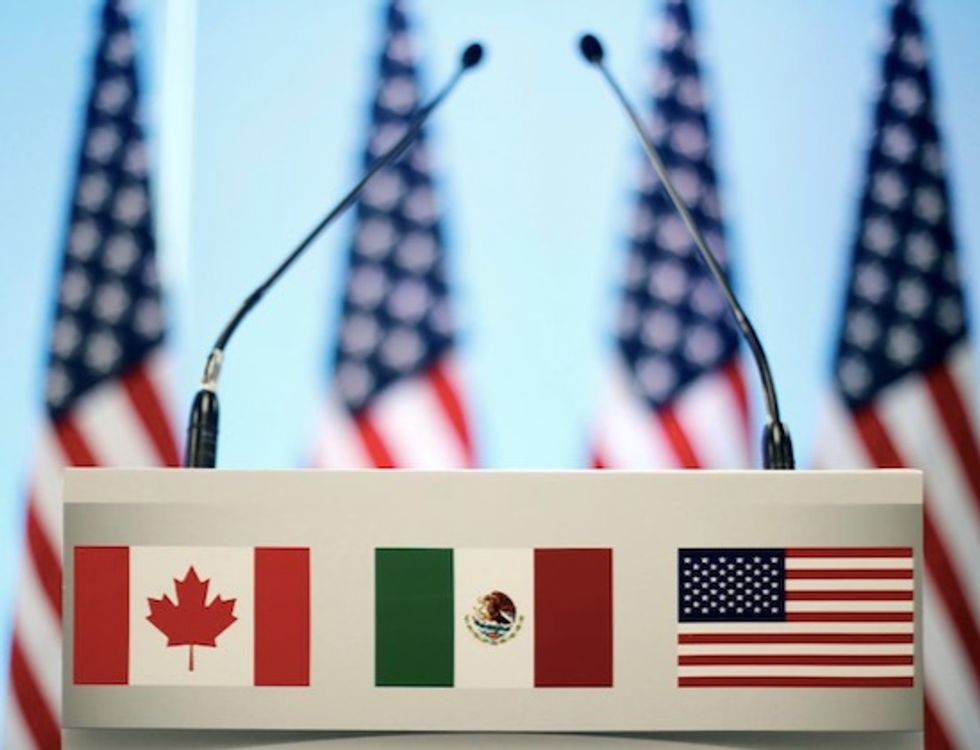 FILE PHOTO: The flags of Canada, Mexico and the U.S. are seen on a lectern before a joint news conference on the closing of the seventh round of NAFTA talks in Mexico City, Mexico March 5, 2018. REUTERS/Edgard Garrido/File Photo

U.S. labor officials on Tuesday pressed lawmakers to strengthen enforcement of the provisions of the United States-Mexico-Canada Agreement (USMCA) intended to protect workers, the latest sign that the trade deal could face hurdles to passage in the Democrat-led House of Representatives.

Renegotiation of the North American Free Trade Agreement (NAFTA) was one of President Donald Trump’s campaign promises and part of his broader push for better terms of trade for the United States. He has said that bad deals have cost millions of jobs.

Representatives from some of the largest and most influential unions in the United States told lawmakers on Tuesday that the reworked pact does not go far enough to ensure improvement of wages and working conditions, especially for Mexican workers.

“All the NAFTA renegotiation efforts in the world will not create U.S. jobs, raise U.S. wages or reduce the U.S. trade deficit if the new rules do not include clear, strong and effective labor rules that require Mexico to abandon its low wage policy,” Celeste Drake of the American Federation of Labor and Congress of Industrial Organizations said at a House Ways and Means subcommittee hearing.

In late 2018, the leaders of the United States, Mexico and Canada signed the deal to replace NAFTA, but it has yet to be reviewed and ratified by Congress. Trade among the three countries totals more than $1 trillion.

Democrats, who took control of the House of Representatives in January, have traditionally been skeptical of free trade agreements and sympathetic to labor groups. Their support is essential to USMCA’s passage.

USMCA requires its three signatories to maintain labor laws in line with international standards, and to enforce them. But critics have called the agreement’s enforcement mechanism insufficient, saying it will still allow weak unions and resulting low wages in Mexico, while failing to stanch the flight of U.S. factories to lower-cost Mexico.

NAFTA, launched in 1994, put labor provisions in an unenforceable addendum to the agreement, allowing Mexican wages to stagnate despite a flood of factory investment from U.S. companies.

“The (USMCA) labor chapter is an improvement. The problem is the enforceability mechanism,” said Shane Larson, a director with the Communications Workers of America, advocating for reopening the agreement.

Autoworkers, too, are concerned about the new agreement, despite provisions aimed at requiring more vehicle value content produced in North America and in high-wage areas in the United States and Canada.

The imposition of NAFTA led to decades of lost jobs for autoworkers, who watched U.S. factories close as manufacturers moved production to Mexico.

House Democrats have greeted USMCA coolly, telling U.S. Trade Representative Robert Lighthizer earlier this month about their concerns about labor enforcement and provisions that could lock in higher drug prices.

“This agreement is a continuation of the assault on the American middle class,” Brian Higgins, a Democratic representative from New York, said on Tuesday at the hearing.

The Trump administration is lobbying to persuade Congress to ratify USMCA this year. Trump visited Capitol Hill on Tuesday to meet with Senate Republicans, and was due to discuss the trade pact with House Republicans later in the afternoon.

Reporting by Chris Prentice in New York and David Lawder in Washington; editing by Simon Webb and Steve Orlofsky