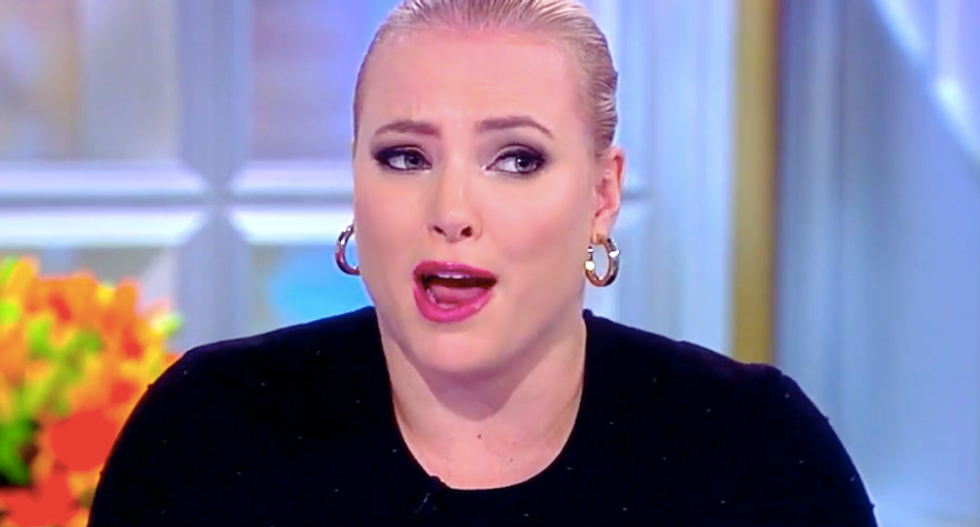 "The View" co-host Meghan McCain called in sick after she endured criticism and mockery all weekend for her comments on anti-Semitism.

“I take this very personally,” McCain said. “I would go so far as to say I probably verge on being a Zionist as well."

Jewish artist Eli Valley posted a cartoon of McCain crying as she held a six-pointed Star of David and poured matzo ball soup mix into a bowl, alongside books entitled “The Jewish Race Explained” and “A Christian’s Guide to Seder."

McCain denounced the cartoon as "one of the most anti-Semitic things I’ve ever seen," and she was widely criticized and mocked online.

“What does anti-Semitic even mean to you?" tweeted Vampire Weekend frontman Ezra Koenig, a former Columbia classmate. "He’s a Jewish cartoonist who has spent his career examining Jewish identity, Zionism & anti-semitism. If this is the most anti-Semitic thing you’ve ever seen, you haven’t spent any time examining those issues yourself."

On Monday, she joined host Whoopi Goldberg, who's been recovering from double pneumonia for weeks, in taking a sick day.

"We are down two hosts today, people are getting sick," said host Joy Behar, and co-host Sunny Hostin admitted she didn't feel well, either.

"Oh my god, I blame it on Trump," Behar joked. "Whoopi is still getting better and will be back here soon, and Meghan is also out sick, so we wish her a speedy recovery."

This is one of the most anti-semitic things I’ve ever seen. Also, this reveals so much more about you than it does… https://t.co/PBQrRRyWT1
— Meghan McCain (@Meghan McCain) 1552067133.0