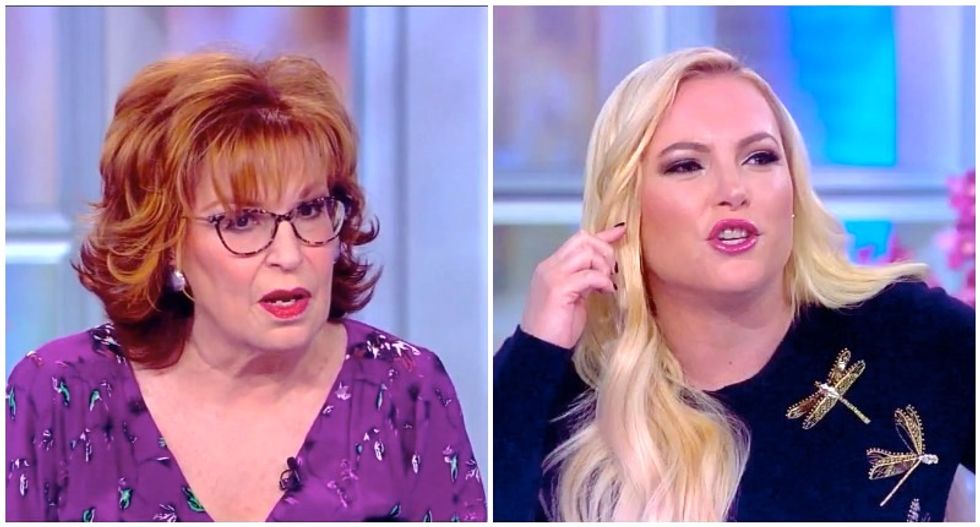 "The View" co-host Meghan McCain examined the evidence in the college admissions cheating scandal and found that she was the real victim.

More than four dozen parents, including actresses Felicity Huffman and Lori Loughlin, were charged with paying to get their children into elite universities in a scam run by consultant William "Rick" Singer -- but McCain predictably found a personal angle.

"For me specifically, not everything is about my family, I know," McCain said, in a display of self-awareness. "I read my tweets, I know what you're saying."

McCain then lashed out at Mossimo Giannulli, whose wife Louglin played Aunt Becky in the "Full House" TV series, for insulting a public university in her home state.

"But if Becky's husband talked crap about ASU," McCain said, "and Arizona State is where the McCain Institute for International Leadership is partnershipped with ASU, where they find students, identify, develop and train a global network of character-driven leaders that I have the luxury to be a part of that institute, and it was chosen because ASU is a premiere educational system, as well."

"Maybe it isn't as good from some people, Hollywood elites' perspective, as Harvard and Yale," continued the Columbia University graduate, "but ASU has a president, Michael Crow, an incredible president, has been doing incredible things for a long time."

"I'm very proud to have my family's name attached to ASU," McCain added. "It's an incredible, incredible, incredible college, and Aunt Becky's husband, whoever the hell you are -- I had no idea who you were until yesterday -- sorry, your kid probably wouldn't have been good enough to get in."

Host Joy Behar tried to steer the subject to legacy admission, after making a brief correction, but McCain took that personally, as well.

"The only thing I will say," McCain said, "when it comes to military academies, my family goes back generations at the Naval Academy, and that's service to your country so i would push back on that part of it because my grandfather, great-grandfather, my brothers, they all served their country."

Behar countered that descendants of alumni should not be granted admission if they didn't have the qualifications, and McCain shot back.

"They did have the grades," she said. "My brother did, but I don't think there's anything to be ashamed of the fact my family's legacy is at the Naval Academy -- my father's buried there."

At that point, Behar had heard enough.

"I'm not talking about your family," Behar snapped. "I'm talking about the policy of where legacy admissions came from. It was to keep non-white people and Jews, probably, out of colleges."

"You said legacy," she said. "I'm very proud of my family's legacy at the Naval Academy."