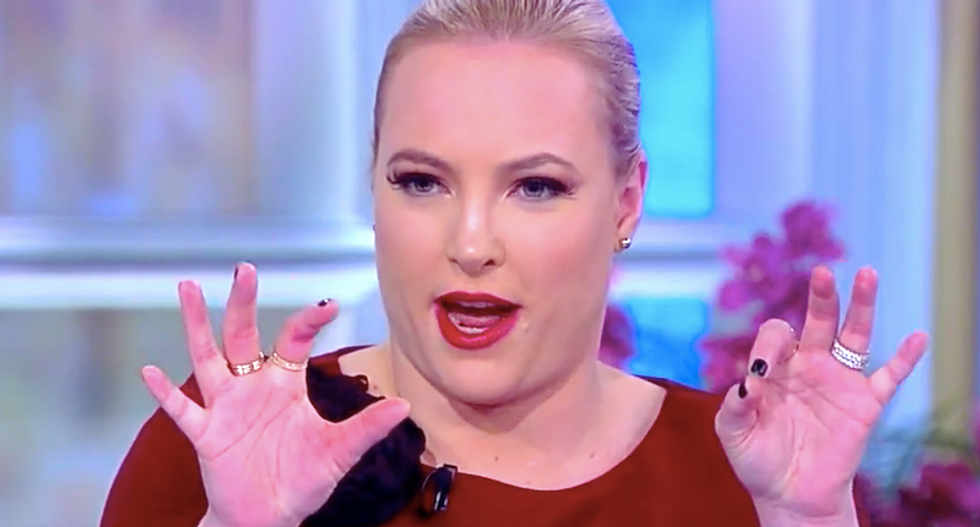 The president was caught on video mistakenly calling the tech executive "Tim Apple," and days later insisted the mixup was intentional, which co-host Abby Huntsman found humorous and slightly endearing.

"This can't be a serious story, we can laugh about the fact that he doesn't have a lot of humility in these moments," Huntsman said. "I think he would be so funny if he were able to laugh, because there's so many statements he makes that you could walk it back and joke about it."

Host Joy Behar quickly corrected her, and argued the president obviously lying about a minor mistake was important.

"It's a serious story because he's a liar, and he's in the position that he's in," Behar said. "Nobody knows the truth from him. We can't rely on him ever telling the truth, (and) he's the president of the country."

Huntsman wasn't persuaded, and said the "Tim Apple" flub was funny, but ignored the subsequent lie.

"Tim Apple, you can laugh at that one," she said. "None of our lives are going to change by him calling Tim Cook, Tim Apple."

McCain then came to Huntsman's defense, and normalized Trump's lies as routine.

"I think what Abby's trying to say is, this isn't new," McCain said. "The fact that he lies about isn't new. We knew that during the election, we're two and a half years in. He's going to lie about something as stupid as Tim Cook being Tim Apple, which by the way, Tim Cook has leaned into it, he put the Apple emoji as his Twitter account."

"It's, like, oh, there's gambling in Casablanca and water's wet -- Trump lies," she added. "Breaking news on ABC's 'The View.'"

Both Behar and Navarro tried to set her straight.

"Explain that to the 46 percent that approve of the job he's doing right now," Huntsman said.

"I can't explain anything to them," Behar replied.