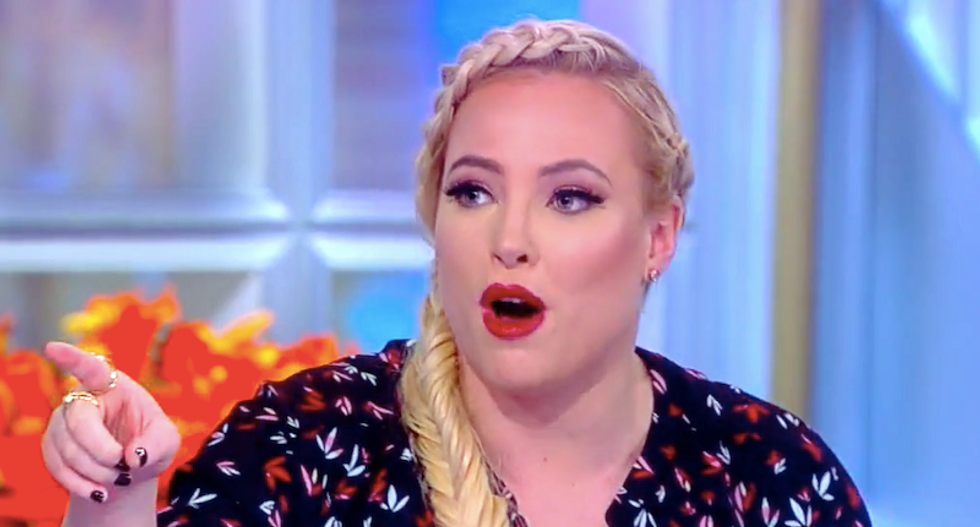 "The View" co-host Meghan McCain offered some unsolicited advice to Democrats for beating President Donald Trump in next year's election.

Former Vice President Joe Biden appears increasingly likely to run for president, and the conservative McCain and Abby Huntsman said he offered the best chance to put Trump out of the White House.

"Joe's the only one that can be the adult in the room and say, 'Do you guys want to be in the primary or do you want to beat Trump?'" Huntsman said.

McCain agreed that Democrats should line up behind the centrist Biden rather than continue pushing a left-wing agenda.

"There's an old adage that -- and I'm going to mess this up but -- Republicans get in line, Democrats get an ideology, and I think that the purity test is a real thing for liberals and Democrats right now," McCain said.

She said freshman House members such as Rep. Alexandria Ocasio-Cortez (D-NY) were leading Democrats too far to the left, but co-host Joy Behar said House Speaker Nancy Pelosi (D-CA) was clearly in charge of the party.

"Well," McCain stammered, "I think she is being pulled in a direction -- I think she's doing the best -- I have never, I think I conceded on this show that she has much more powerful than I had given her originally. But I do think when it comes to primary challenges we are going to see what this party is and I know for people like you, Joy, and correct me if I'm wrong, you want to win, you want to beat Trump."

Behar readily agreed, and joked she would vote for Biden, comedian Joe Piscopo, her ex-husband Joe Behar, or basically anyone else named Joe.

"Will you be willing to hedge," McCain said, "say he hypothetically came out against the Green New Deal -- and I don't speak for him, I have absolutely no idea -- but if he did that are you still okay? There are certain topics that I don't think he will go, and I'm just pontificating on speculation, that he wouldn't go full left on. Would someone like you still be comfortable with that?"

Co-host Sunny Hostin pointed to polls showing Democratic voters would, and McCain cut her off.

Behar again said she'd vote for anyone against Trump, and Hostin again pointed to the Monmouth poll showing most Democrats felt the same way.

"I hope that's what happens, (but) I will be interested to see (what) ends up happening -- just ideological purity or beating Trump," McCain said. "You have to trust me and Abby, because we're the ones that spend the most time in the red states, no shade. I'm telling you if you go too far left -- and by the way, if Trump wins I want on repeat all the warnings we've been giving."