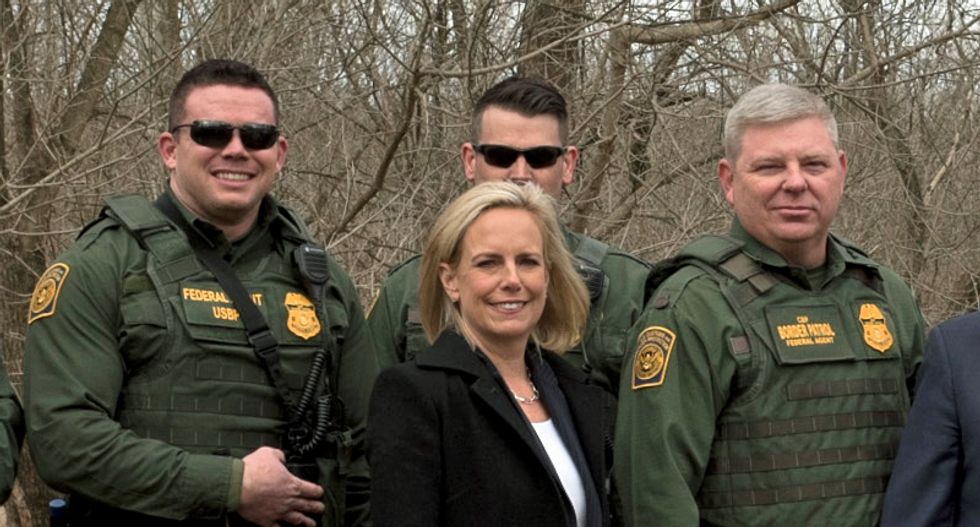 President Donald Trump ousted Homeland Security Secretary Kirstjen Nielsen Sunday after years of her inability to follow the president's orders, that defy American law on immigration. Trump has said that he wants to close the border, he tried to supersede Congress to fund the border wall he promised during the 2016 election and attempted to stop refugees and asylum seekers from coming into the U.S.

According to National Security analyst Juliette Kayyem, any person who comes into that position is going to be set up to fail.

"She described what was happening at the border as a freefall," said host Ana Cabrara. "She said the system was in a freefall. She talked about the crisis growing, and now we have a tweet from the president confirming she is no longer the Department of Homeland Security secretary."

Kayyem noted that it's further proof that no one can out-Trump the president.

"Nielsen did everything to be the secretary that Trump demanded including, as I was saying in the earlier hour being the face and name of the immoral and cruel family separation policy," said Kayyem. "This will be a legacy that follows her to whatever her next career will be."

CBS reported Sunday that this is part of Stephen Miller's attempt to make the DHS far more extreme.

Kayyem said that Nielsen couldn't "sustain Trump's approval" and also follow the law at the same time. Trump's new acting secretary will be Kevin McAleenan but she doesn't anticipate him being the eventual nominee.

"Nielsen could not be -- Nielsen tried to be what Trump believed a cabinet secretary should be, and the head of Homeland Security could do, which is you stop all migration," she said. "That is impossible to do. The whole point of having border enforcement is you try to curb it, allow asylum seekers to come in, you arrest others."

She explained that Trump believes the border shouldn't allow for any of these things, whether the law provides for it or not.

"There's no way Nielsen could be harsh enough against the reality of what our border looks like," she said.

CNN host Ana Cabrara asked if it meant any person who holds this role is doomed to fail in Trump's eyes.

"Yes," Kayyem replied. "There's no question in my mind that Trump's view of what a border should look like, just think of the wall, is inconsistent with what over 600,000, 700,000 lawful migrants crossing the U.S./Mexico border a day. Look, the president threatened to close the borders with Mexico last week. None of us in the field believed him. You knew it was just a blast. But that's reflective of the president's frustration and sense of a solution."

She said that the president thinks that these policies are like a light switch he can flip when neither law nor government works that way.