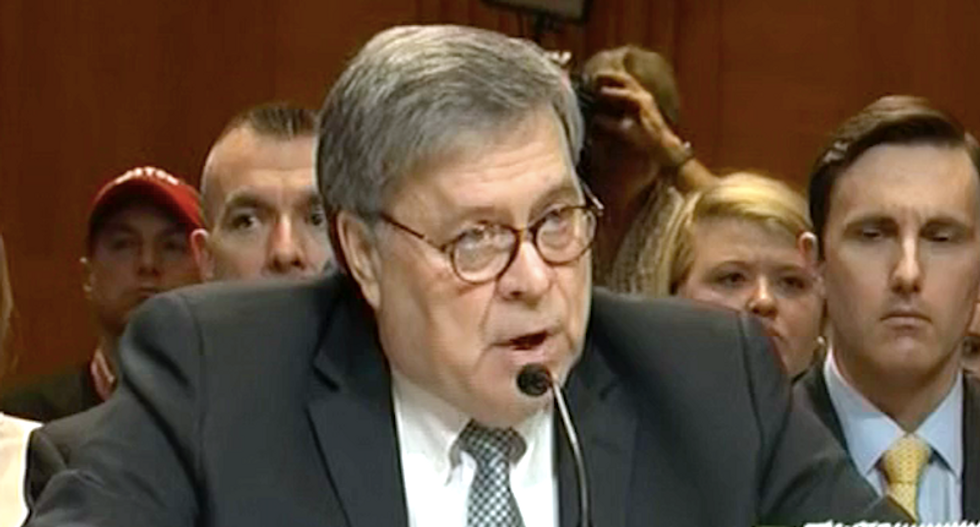 The attorney general testified Wednesday before the Senate Appropriations Committee, where he leveled the accusation under questioning by Sen. Jeanne Shaheen (D-NH).

"Well, you know, for the same reason we're worried about foreign influence in elections," Barr said. "We want to make sure that during -- I think spying on a political campaign is a big deal. It's a big deal."

He compared the FBI investigation of possible Trump campaign ties to Russia, which was launched in summer 2016, to law enforcement conducting surveillance against anti-war protesters in the Vietnam era.

"There were a lot of rules put in place to make sure there's an adequate basis before our law enforcement agencies get involved in political surveillance," Barr said. "I'm not suggesting that those rules were violated, but I think it's important to look at that, and I'm not talking about the FBI necessarily, but intelligence agencies more broadly."

Shaheen asked him directly whether he was accusing the government of spying on Trump's campaign, and Barr paused for a moment and stammered.

Shaheen appeared to be at a loss for words, and then Barr hedged a bit.

"The question was whether it was adequately predicated," he said, "and I'm not suggesting it wasn't adequately predicated. I need to explore that, I think it's my obligation. Congress is usually very concerned about intelligence agencies and law enforcement agencies staying in their proper lane. I want to make sure that happened. We have a lot of rules about that."