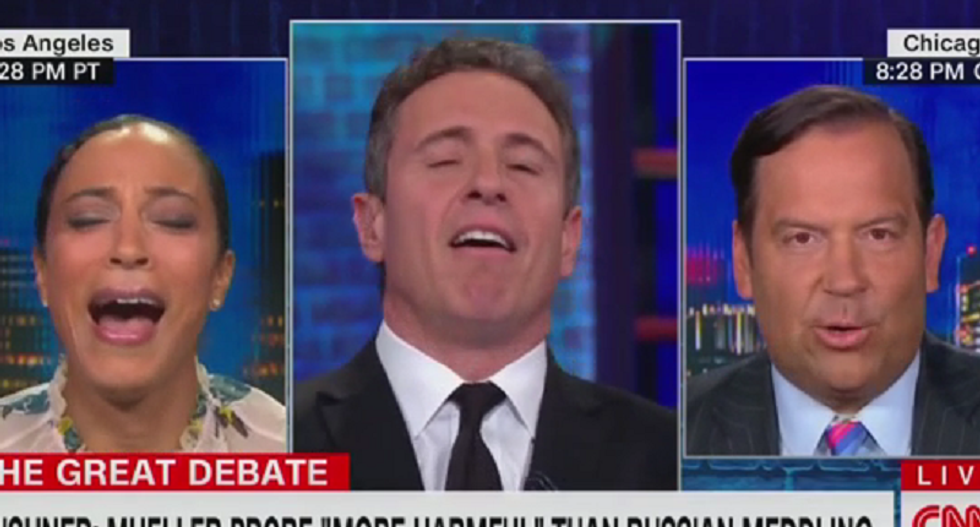 On CNN, the Trump Hispanic Advisory Council's Steve Cortes tried to defend Jared Kushner's recent dismissal of Russian attacks on the 2016 election as "buying some Facebook ads" — and was immediately shouted down with laughter from host Chris Cuomo and attorney Angela Rye.

"If discretion were part of the calculus in getting security clearance, we understand why Kushner had a hard time with these other guys that look into whether or not you're worthy of what they want to give you," said Cuomo after playing the clip of Kushner. "You would never argue what he just did. You would never argue that. Not on this show."

"I would argue that Jared Kushner is exactly correct," said Cortes.

"I'm sorry. I thought he was going to say something different," chortled Rye.

"They spent a total of $100,000 on Facebook ads," Cortes plowed on. "Look at the amount of time that the media and Democrats have spent on this over the last two do you know how much the campaign spent? $81 million on Facebook ads in a presidential campaign with billions of dollars in total spending. What this is really about is to try to create a scapegoat and I have not heard sore losers blame a scapegoat this badly since Steve was blamed for the 2003 cubs meltdown in the playoffs. Voters in Wisconsin did not have their minds changed by the Russians." (In fact, the Mueller report shows that Russia spent more like $1.25 million on ads per month.)

"If that's how you feel, why grossly, grossly underplay Russia's efforts spelled out in great and unredacted detail largely in the Mueller report. Anyone who looks at that, Steve, is gonna say, that's poppycock, they did tons of stuff. They had a reach that was extraordinarily by Facebook's own reckoning."

"Here's the bottom line," said Rye. "When we get to a point that we say I'm not going to really engage in this conversation about whether or not the impact they intended to have was indeed felt. The bottom line is, Russia interfered with the election, full stop. It doesn't matter the size of the contribution, it doesn't matter the cost of the campaign. The fact that you don't even understand that they literally bought off low level activists that were targeted in my community is a problem."

"So we can't just calculate this by the amount they spent on Facebook ads. It's far bigger than that and I think once we get to the point where we can justify this type of cyber warfare by saying it wasn't that significant, Donald Trump spent way more money or Hillary Clinton spent way more money?" Rye said. "Bro, you're just wrong."