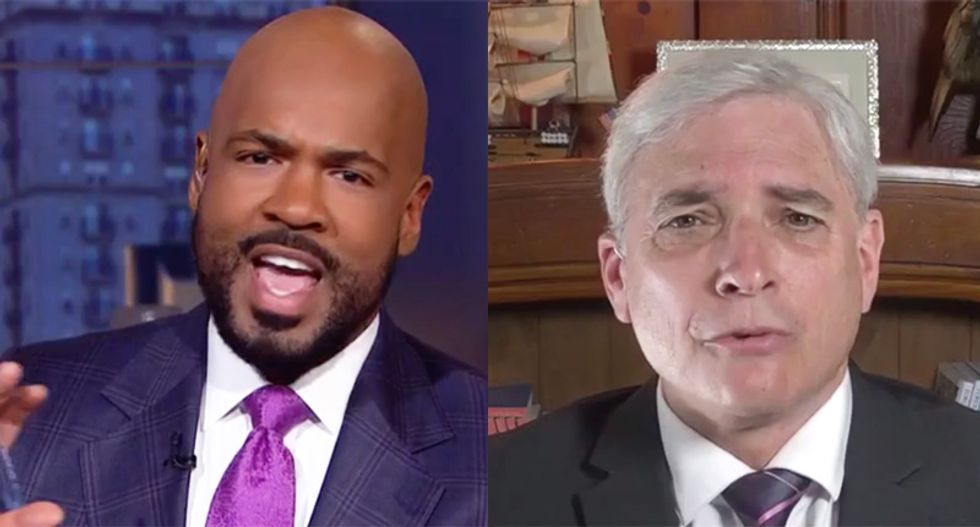 CNN host Victor Blackwell got in the face of a member of Donald Trump's 2020 campaign advisory board over the president inciting violence against Rep. Ilhan Omar (D-MN) by posting an incendiary video about her on Twitter -- then called him out as a liar for saying Trump was innocent of encouraging violence against his detractors.

Appearing on CNN's "New Day," advisor Steve Rogers said he had no problem with the video -- despite the fact that it was edited in such a way to link Rep. Omar to the 9/11 attack.

This, in turn, led host Blackwell to remind Rogers of recent threats to Omar.

"Last week, a man was arrested for threatening to murder Congresswoman Omar and according to the affidavit, he said, and this is a quote, 'He is a patriot, loves the president and hates radical Muslims'," Blackwell explained. "This is in reference to why he wanted to hurt, to kill representative Omar. Should the president consider that when tweeting videos on his Twitter account? "

"You know what? We certainly will never, ever endorse someone committing an act of violence against anyone," Rogers replied. "We say things and express our freedoms of speech. We are not responsible for the actions of other people. We could say something on air and a crackpot will turn it around and try to justify their actions."

Host Blackwell then called him out by saying, "That is simply not true," reminding him of Trump's inflammatory rally rhetoric.

"If you see someone who wants to throw a tomato, punch him in the face or I'll pay your legal bill if you attack a protester," something like that?" Blackwell pressed, quoting the president.

"I have been to his rallies. I have been all over the place with him," Rogers argued. "He has never incited violence. He has never, ever suggested violent acts  against each other."