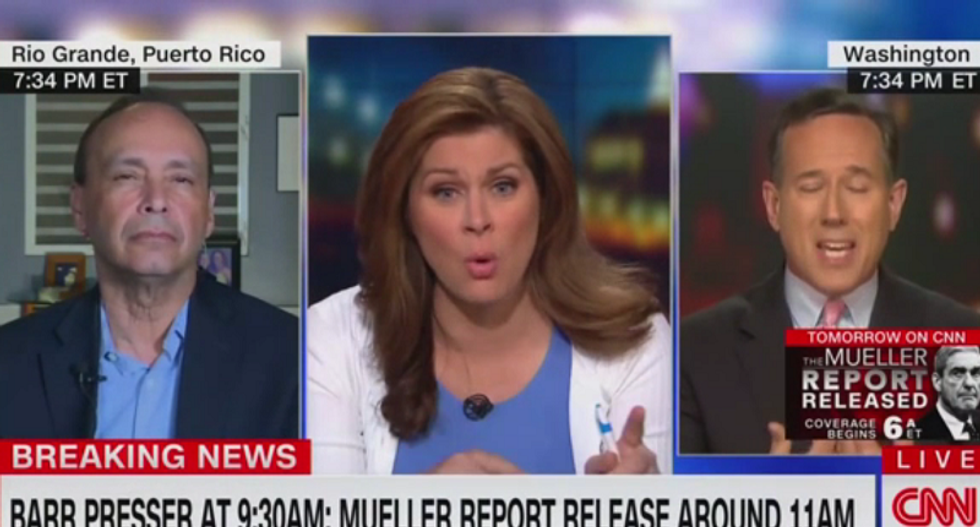 On CNN's "OutFront" on Wednesday, Erin Burnett clashed with Trump supporter and former Sen. Rick Santorum. The debate grew heated after Santorum defended Attorney General William Barr for his unsubstantiated claim the FBI "spied" on the Trump campaign, and Burnett called him out on it.

"Look, to suggest that Bill Barr who is — has a great reputation in this town, was attorney general before," said Santorum. "No one questioned his independence when he was an attorney general in a prior administration."

Burnett pushed back, pointing out that Barr "echos this president to an eerie extent," including on the spying allegation. "I mean, senator, that's — there's no coincidence, right? This is very careful, it's crafted. Bill Bar is choosing to use the words of the president."

"Those are legitimate characterizations of what's going on," Santorum insisted. You say surveillance isn't spying, well, I disagree. I mean if someone's surveilling me they're spying on me. So you can — to me that's a semantic difference."

"Right, but if you're doing it with a court order and through a legal system, that is a completely different—"

"You're saying spying is a pejorative term," Santorum said. "I don't think it is."

"I am saying it is being used in a pejorative manner, to imply something extrajudicial, and I don't think there's any question about why the word's being used," Burnett replied.

"Because it's accurate," said Santorum heatedly. "Look, Erin, the idea, this is something I just can't get over that is not really — people on both sides of the aisle aren't concerned about this that a presidential candidate's campaign of people attached to his campaign are being surveilled and that the person running for president — I ran for president. If someone deep in my campaign, someone was being surveilled, I would be pretty ticked off that no one told me there was something going on. I mean, the idea of a presumption—"

"I don't want to go through this all again but they were told — they were worried about Russian infiltration in the campaigns," Burnett corrected him.

"Fine, then you come to me!" shouted Santorum.

"There was a warrant to surveil Carter Page, who they believed could be — I'm not trying to relitigate the whole thing," Burnett said.

"Why didn't they go to candidate Trump?" Santorum asked. "This guy is running for president and something may be going on — you know with somebody attached to his campaign — I'd like to know that as as opposed to someone assuming that I'm complicit!"

"But maybe they're trying to understand what he knew, because his son is having meetings with his campaign chairman and admitted Russian informants and they're like, 'wait, if we tell him, because we don't know what he knows or what the is his role? I mean, I can see both sides of this here, Rick."