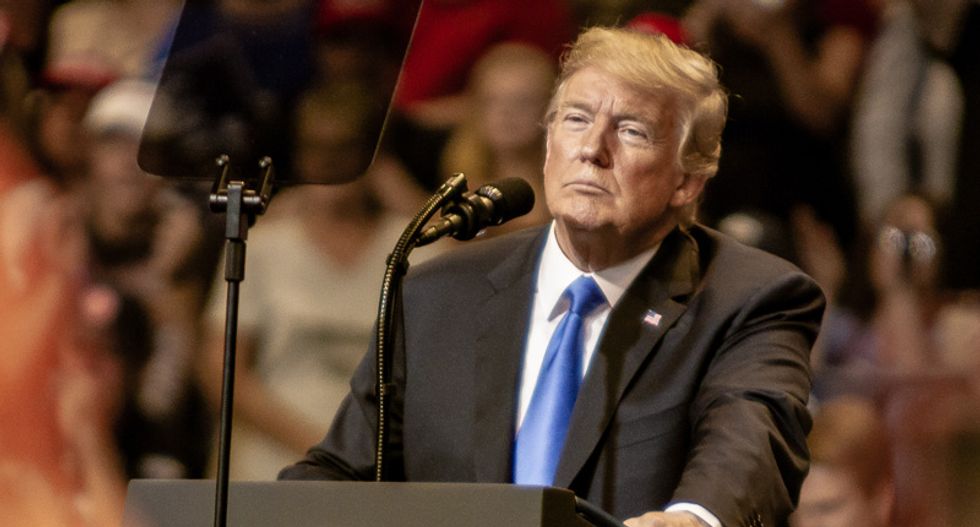 President Donald J. Trump looks on as the crowd reacts to his speech during the "Make America Great Again" rally held at the Mohegan Sun Arena. (Brandon Stivers / Shutterstock.com)

Fulfilling Donald Trump's promise that he can bring Americans together, a conservative New York Times columnist agreed with one of his liberal counterparts that the president is "awful" and needs to go.

In a joint conversation served up as an editorial, conservative Bret Stephens joined with GailCollins to marvel at how bad Trump came off in the Mueller report --before urging Congress to do something about the clearly compromised Trump.

"Impeachment would drive the whole country even further apart. Let’s just vote the sucker out." Collins wrote, to which Stephens agreed, adding, "But I’m afraid the president is helped by the report, even if he, as usual, isn’t acting like it. Much as we might want to dwell on all the unsavory things the report tells us about the way Trump conducted his business and now runs his presidency, it’s not anything the American people, including most of his supporters, didn’t already know."

According to the conservative columnist, "My own view is that the biggest scandal in American politics happened on Nov. 8, 2016, the day Trump got elected. It’s the president in plain sight that should worry us, not the guy behind closed doors."

Collins shot back that it is still her belief that Trump doesn't have the "mental capacity" to collude ("You do need a certain amount of organized thinking to conspire") which Stephens also agreed with, before she stated, "The report, lily-livered though it may be, does make it pretty damn clear he was engaged in an attempt to obstruct justice. Don’t you think Congress should at least try to censure him for that? "

Stephens worried that it would "wind up being a mostly partisan affair with a few possible surprises," before suggesting instead, "The main task for Democrats right now is to get behind a candidate who can win."

"We agree on Trump’s awfulness," Stephens wrote, before stating that he hoped D the Democrats don;t nominate Sen. Bernie Sanders (I-VT) because it lessen the chances of ousting Trump.

"I find even his brand of 'socialism' a nonstarter, and I suspect millions of middle-of-the-road Americans who would otherwise love to see Trump go will feel the same way when they realize how much Scandinavian-style welfare statism is going to cost them and weaken the long-term economic health of the United States," he explained, before adding the caveat: "We’re a weird country. I think the overwhelming majority of Americans would be perfectly happy with a center-left or center-right president who was sane, steady, even a bit boring."

You can read the whole back-and-forth here.