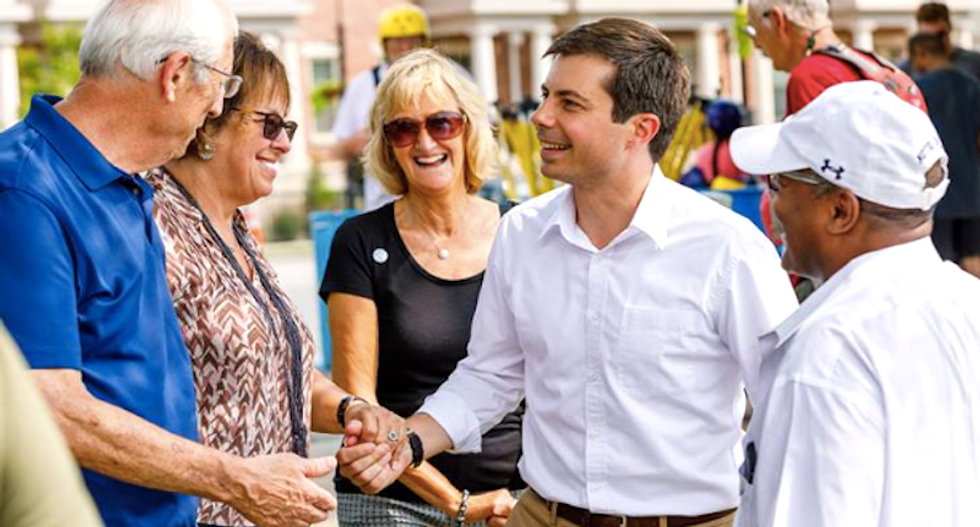 Pete Buttigieg first exploded onto the national stage last month, during a presidential town hall hosted by CNN, and conservatives were intrigued.

Rush Limbaugh praised the "personable" South Bend, Indiana, mayor on air -- "There was no radicalism," he said -- and predicted he'd "make mincemeat" of other Democratic presidential candidates -- but that was before Buttigieg started climbing in the polls and raising a surprising $7 million, reported The Daily Beast.

On Monday, the same day that fundraising haul was announced, Limbaugh reversed course and warned his listeners that Buttigieg had "radical ideas" he'd learned from his late father, an expert on Italian Marxism.

“He grew up learning Gramsci and Marx and Engels,” Limbaugh said. “He didn’t grow up learning about Madison, Jefferson, and Washington.”

Other conservatives have made a turnaround on their initial curiosity about Buttigieg, a gay Afghanistan war veteran who likes to talk about infrastructure, his religious faith and reaching out to "left behind" Trump voters.

“He has steadfastly refused to become mired in the Democrats’ woke-off," wrote Commentary’s Noah Rothman a week ago, "and he’s managed to avoid engaging with his fellow presidential candidates in the culture war’s unwinnable arms race.”

Fox News host Jeanine Pirro and former Trump campaign manager Corey Lewandowski both praised Buttigieg over the weekend, before the fundraising totals came out, for emphasizing a message that goes beyond hammering the president.

“Pete’s message is probably the right one for the Democrats: Stop attacking Donald Trump, and go find something positive you can actually do for the country,” Lewandowski said.

But the mayor has drawn more fire from the right since showing he can rake in campaign cash.

The conservative Washington Examiner published a story Tuesday highlighting the Marxist views of Buttigieg's father, expanding on Limbaugh's rant the previous day, and other conservatives picked that up to suggest the 37-year-old -- praised by Rothman just days earlier as a libertarian -- was an avowed communist.

“The coastal elites? I don’t think they’ve ever loved a Midwesterner as much as they love Pete,” Ingraham griped, and then mocked his religious beliefs. “He says he’s a traditional Episcopalian, whatever that means these days."

She also warned viewers that Buttigieg may hold secret communist beliefs inherited from his father.

“Pete was close to his father, which you can expect, which will lead many voters to wonder how far the apple fell from the tree,” Ingraham said, and then suggested his multilingualism was suspect. “The ‘cool fact’ that ‘cool Pete’ speaks seven languages doesn’t change that socialism doesn’t work in any of them."