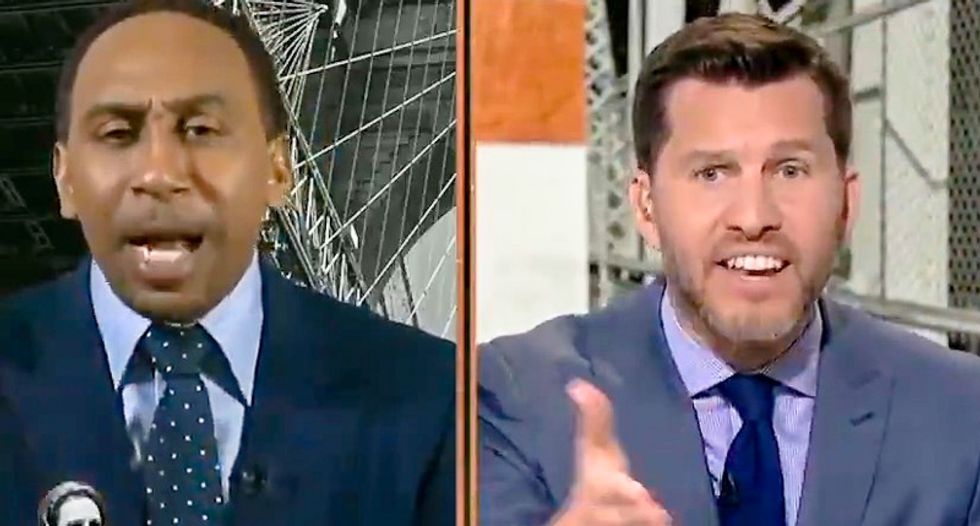 Stephen Smith and Will Cain appear on ESPN (screen grab)

During a contentious debate about racism on Monday, ESPN anchor Will Cain argued that it is pointless to acknowledge racism in America's history.

Cain suggested that Major League Baseball teams should continue to use Smith's recordings regardless of her history.

"I'm suggesting it's an absolute and utter fools errand to go back through history, decades, someone who's been passed away for 30 years, incidents which occurred eight decades ago and apply modern historical standards to something that can almost reach a century!" Cain shouted.

The ESPN host said that black host Stephen Smith's "standard" only "requires a few people to be a little outraged to go out back and tear statues down."

"And I'm telling you by your standard, President Obama statues would not stand to todays standard when it comes to gay rights!" Cain continued. "And that to me is asinine!"

"Obama was opposed to gay rights and by today's standards, that would be asinine," Cain insisted.

"There will always be an offended party," Cain quipped.

"Will... you think the threshold is too low," Kellerman observed. "You think that any offended party, if they are outraged enough, can change history. That is not my contention. It is not the point I am here making."

"What I'm saying is in the 1930s, if someone was putting out racist lyrics -- not everyone was racist, not all white people were racist, but many of them were," he continued. "There were told oftentimes how wrongheaded they were. It's not as though they weren't aware of this. They made their choice."

Kellerman also reminded Cain that "black people were horribly disenfranchised and alienated and marginalized and oppressed."

"And now to say, 'Well, that's the way it was then. And now, even with the advantage of hindsight, well, look, yes, there was all this injustice and we've got to just go along with it now and we can never correct anything, we can never with the vantage point of history say, you know what, that was bad,'" Kellerman remarked.

Cain agreed that there is "no debate about the nature of the songs that Kate Smith sang."

"No one is here to excuse them," he stated. "What we're talking about is how we treat history and the standards we apply. That's it."

"Why placate [Kate] Smith, Will?" Kellerman asked. "There are plenty renditions of 'God Bless America.'"

Watch the video clip below from ESPN.