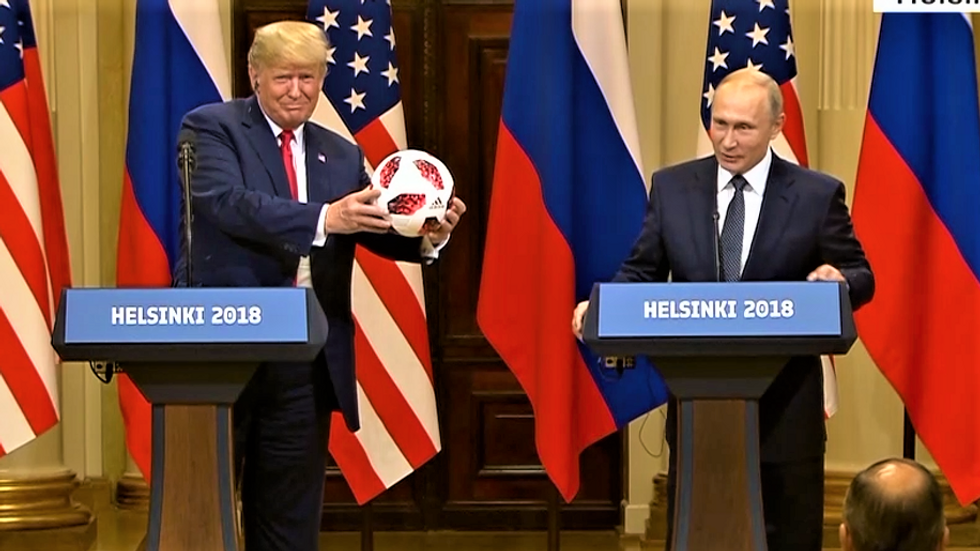 President Donald Trump and Russian President Vladimir Putin meet in Helsinki (Screen cap).
As we collectively devour the Mueller Report, there are two gigantic questions surrounding the entire Russiagate saga that transcend the deeply problematic behavior of Donald Trump and his campaign. 1) Is the Russian government engaged in an ongoing attack against the United States and our elections, and 2) did the 2016 phase of the attack change the outcome of the election, handing the victory to Trump?

Robert Mueller and his investigators are clear and unequivocal about the first question, and it’s an answer we’ve been aware of since at least June of 2016 when we first heard about the linkage between the hacking of the DNC and the Russian military intelligence agency, the GRU. Yes, Russia absolutely attacked the United States with the explicit goal of helping Trump win the election. Mission accomplished. Trump narrowly won the electoral vote, due in part to wafer-thin victories in battleground states like Michigan, Wisconsin and Pennsylvania.

As many of us are aware by now, the attacks were carried out by trolls working for the Putin-linked Russian Internet Research Agency (IRA) in St. Petersburg, along with the Russian GRU itself. The former handled the social media front of the attack, referred to in the Mueller Report, by the way, as “information warfare.” The latter, the GRU, was focused primarily on malicious hacking attempts, many of which famously succeeded. We’ll discuss some of those successes presently.

Before we dig into the confoundingly harrowing details enumerated in the report, it’s critical to emphasize exactly what’s happening here. Russia is fighting an undeclared cyber war against the United States, and they’re targeting our elections — the very centerpiece of our representative democracy. They’re doing so to both manufacture chaos and to elevate Trump, whose campaign and presidency continue to immolate long-standing political traditions and institutions. It’s comedian John Mulaney’s “horse in a hospital” scenario in which 62 million voters decided the metaphorical hospital (the nation)  is mismanaged and the only solution was to let a horse loose inside the building.

Once again, mission accomplished. We have chaos.

But because we don’t see burning buildings, surface-to-air rockets and all of the usual wartime optics, too many American citizens haven’t fully grasped that Russia successfully attacked us and continues to attack us. No “God Bless America” bumper stickers this time. No yellow ribbons. No Toby Keith anthems. But that doesn’t mean it’s not underway.

With the existence of the attack as context, Rudy Giuliani’s remarks over the weekend sound mind-blowingly treasonous: “There’s nothing wrong with taking information from Russians,” he said. Imagine him saying the same about, say, al-Qaeda. Whether Rudy cares to acknowledge it or not, Russia is at war with us, and reports indicate their measures are becoming more sophisticated as we approach 2020. In fact, Gaslit Nation’s Andrea Chalupa appeared on my podcast last week and warned about the next-level tech the Russians plan to deploy, including artificial intelligence.

And yet, the commander-in-chief refuses to even acknowledge the attack as anything but a hoax, cravenly accepting the word of our attackers over the word of the U.S. intelligence community, not to mention over the evidence presented in Mueller’s report, and even over the word of his newly appointed Wormtongue, William Barr, who, despite his shortcomings, affirmed the attack in his March 24 memo.

Unlike Trump’s predecessor, Barack Obama, Trump refuses to condemn Putin, he refuses to order retaliatory measures and, in fact, he’s quietly rolling back some of the actions against Russia taken by Congress and the Obama team. Trump is defiantly and unpatriotically allowing the attacks to continue because Russia benefits him personally, not just in terms of help with the election, but in terms of maintaining his status as president, which is the only thing keeping Trump out of court and out of prison.

The next question is whether Russia won the election for Trump, and the Mueller Report provides additional evidence leading in that direction, if not actual verification. Based on the evidence we’ve seen so far, it’s fair to draw the conclusion that Russia absolutely altered the outcome of the 2016 race, and will likely do it again in 2020. We don’t know yet whether actual votes were changed on Election Day, but it’s reasonably obvious that minds were changed before anyone stepped into a booth to cast their ballots. Here’s how that likely happened.

Mueller and his team exhaustively detailed the “information warfare” against the United States in Volume I, Section II of the report, specifically how the IRA infiltrated Facebook and Twitter with the intent to change the minds of voters, its propaganda targeted at Americans to either vote for Trump or against Hillary Clinton. In conjunction with the leaking of stolen emails by the Russian GRU through Julian Assange’s Wikileaks, Guccifer 2.0 and DCleaks, the IRA operated Facebook groups with hundreds of thousands of members. Mueller notes that Facebook told investigators the reach of the propaganda was anywhere from 29 million to 126 million people (page 26). Shockingly, many of the IRA’s tweets and statuses were retweeted and shared by Trump and his campaign, including Donald Trump Jr. and Eric Trump, thus adding to the legitimacy of the agitprop. The fake Twitter accounts boasted tens of thousands of followers.

Sadly, there are millions of Americans who share, like and retweet without investigating whether they’re sharing foreign propaganda or fake news. Many of us recall seeing these materials in our feed — we watched it happen in real time — and anyone who’s been on social media for more than two minutes knows how influential it can be.

Perhaps one of the most outrageous sections of the Mueller Report describes contacts between Trump’s campaign chairman and convicted felon Paul Manafort and his “man in Kiev” Konstantin Kilimnik, a GRU operative and Manafort’s longtime fixer in Ukraine. Turns out, Manafort owed Russian aluminum king and Putin ally Oleg Deripaska millions of dollars, and as part of his repayment, Manafort offered Deripaska through go-between Kilminik access to Trump campaign materials. On page 140 of the Mueller Report, investigators described the following scene from August 2, 2016:

...Manafort briefed Kilimnik on the state of the Trump Campaign and Manafort’s plan to win the election. That briefing encompassed the Campaign’s messaging and its internal polling data. According to [deputy campaign chairman Rick] Gates, it also included discussion of “battleground” states, which Manafort identified as Michigan, Wisconsin, Pennsylvania, and Minnesota.

As we all know, those three states, minus Minnesota which Trump barely lost, were the clinchers for Trump. Neither Mitt Romney, John McCain, George W. Bush nor Bob Dole won any of those states in previous elections, yet we’re expected to believe Trump, of all people, accomplished what no other Republican has been able to do since 1988? Additionally, Trump won the entire trifecta by less than one percent of the popular vote — a 10,000-vote margin in Michigan, 22,000 votes in Wisconsin and about 44,000 in Pennsylvania. Around 51,000 previous Bernie Sanders supporters voted for Trump in Wisconsin, around 47,000 Sanders voters went for Trump in Michigan, and a whopping 116,000 more in Pennsylvania. In every case, we’re talking about election-altering margins, especially when we add the tens of thousands of votes for Green Party nominee Jill Stein in those states.

Now, it turns out Manafort and the Russian GRU targeted these states as clinchers. Mueller doesn’t connect the final few dots on this front, but in context of the widespread nature of the attack, it’s fair to say that Russia knew where to focus its efforts, and the bizarre election results speak for themselves.

The GRU’s aforementioned hacking attempts weren’t strictly limited to hacking the DNC and DCCC. According to Volume I, Part III, Section C on page 50, Mueller’s team describes how the GRU targeted “individuals and entities involved in the administration of elections.” More specifically, we’re talking about the networks and databases tasked with managing votes and voters. The Russians also targeted “private technology firms” who created “election-related” tech, “such as voter registration software and electronic polling stations.”

In July of 2016, the GRU scanned networks in “more than two dozen states.” It also “gained access to a database containing information on millions of registered Illinois voters.” The attack against the Illinois Board of Elections is just one of many, per the report. Additionally, just before Election Day, the GRU targeted Florida officials and were able to access election networks there, according to the FBI. Remember when former-Senator Bill Nelson said Russia had infiltrated Florida? He wasn’t wrong.

Without backup paper trails, it’s difficult to know whether hackers successfully changed votes or deleted voter registrations. It’s also difficult to say whether the hackers were unsuccessful. All we know is they tried and were able to break in. But let’s use our common sense here: if a burglar breaks into a house, the burglar is either casing it for a future intrusion, or the burglar plans to steal something while there. Applied to the Russian attack, neither option is good news for American democracy and, to repeat, Russia’s methods are only evolving in sophistication and efficacy.

The Mueller Report is not only a roadmap for prosecuting Donald Trump for obstruction of justice, as well as a tacit recommendation for impeachment, it’s also a 400 page red-alert warning to American voters that we were attacked in a way that was vast and successful while mostly imperceptible until after it was too late.

With the next election just 18 months away, we’ve been given ample warning that Russians are once against falling into formation at the border in preparation for another invasion of our national sovereignty and, indeed, another assault against the centerpiece of our democracy in the name of retaining Trump as president. Either we take action now by becoming more aware of the known methods of attack (especially social media users!) and arming ourselves against its trolls and foot soldiers, while also forcefully lobbying our government to take stronger action, or the prospect of Russian-style autocracy will metastasize here, before most Americans realize what’s happened.

Meanwhile, Trump’s victory in 2016 deserves to be recalled by history with at least an asterisk. As time rolls on, it’s becoming increasingly clear that Trump was illegitimately elevated to the presidency by a hostile foreign government with the unwitting assistance of Americans too naive to understand the difference between agitprop and facts. Consequently, minds were changed — possibly enough minds to foist this chaos agent, this unqualified faker, this brazen criminal into the Oval Office.