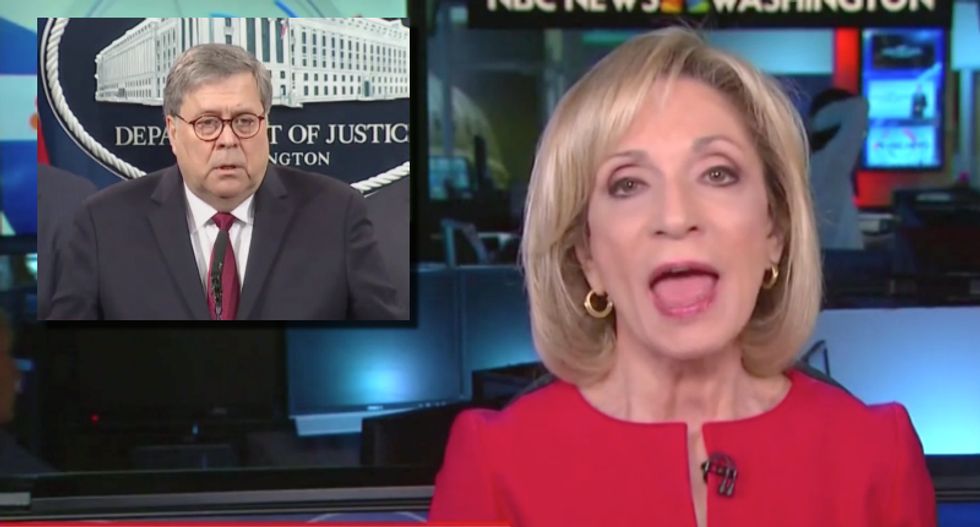 MSNBC's Andrea Mitchell nearly blew a gasket after Attorney General Bill Barr's press conference, saying it was "objectionable" to see the nation's highest law enforcement officer acting like President Donald Trump's "defense lawyer," and predicted his reputation as a jurist would be permanently stained as a result.

"I was so struck by that because what the attorney general seems to be saying, and going out of his way, is to say there was no intent," Mitchell said.

"How do we know there was no intent without an interview?" she continued, noting that Trump only submitted written responses to the special counsel. "There's no way that Mueller could follow up and try to determine the intent."

Barr has gone "out of his way, as though he were a defense lawyer, to explain the pressure that the president was under coming into office with all of the allegations against him," Mitchell continued. "That is not his role."

"He just said she was extraordinarily careless and he then decided there was no basis to prosecute," she said. " "Here the attorney general is going well beyond that even, in clearing the president."

As a result of his obeisance, Barr would sustain "a real black mark on his long and previously distinguished career," Mitchell continued. "He has gone way outside the bounds of what the attorney general should have been presenting, even if you concede that he should have pre-butted or preempted the report before having this news conference, which I think was extraordinary and really objectionable."