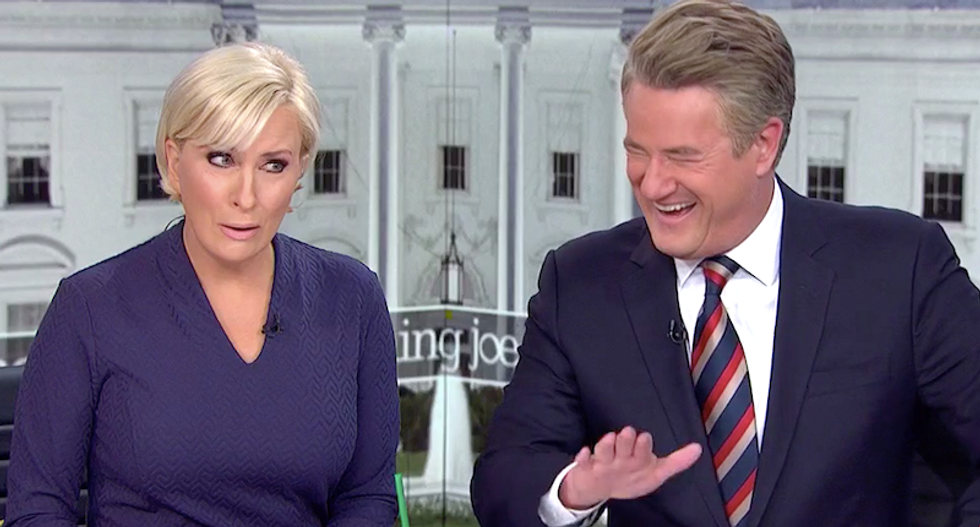 MSNBC's Joe Scarborough cracked up laughing -- and co-host Mika Brzezinski was left speechless -- after watching video of Rep. Thomas Massie (R-KY) flop during his attempt to trip up John Kerry during a congressional hearing.

The Kentucky Republican grilled Kerry, a longtime senator and former Secretary of State, on his credentials, and Massie was widely mocked online after his efforts to undermine Kerry's credibility fell well short of their mark.

Rolling Stone magazine wondered whether the exchange might be "the dumbest moment in congressional history," and Kerry ridiculed Massie on Twitter.

"Congressman Massie is a very smart guy," said co-host Willie Geist. "He went to MIT, got his masters from MIT, and I think John Kerry had the appropriate response -- let's pump the breaks here, 'You don't mean that, right? Are you serious? Are we really doing this right now?'"

"In response to your question, Steve King has called in and said, 'Hold my beer.'"

Scarborough came back to Massie later in the opening segment, after breaking news about WikiLeaks founder Julian Assange's arrest, to mock him again.

"By the way, we just got a tweet from Congressman Massie, why the New York Times had a Dunkin' Donuts glazed donut on the cover," Scarborough said, showing the newspaper's front-page photo of a black hole. "He's very angry, and said he went to MIT and he said it should've been, because he's from Kentucky, a Krispy Kreme."