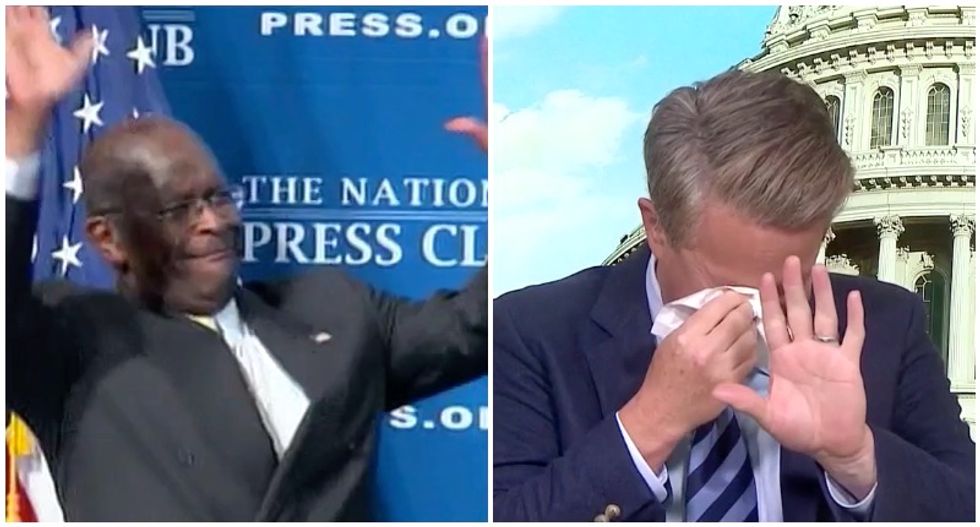 MSNBC's "Morning Joe" welcomed Herman Cain back to political news by re-running a hilarious supercut video from the end of his failed presidential campaign.

President Donald Trump nominated the Republican businessman to serve on the Federal Reserve board, much to the surprise of economists, and "Morning Joe" reprised a video, underlined by songs by Sarah McLachlan and Celine Dion, from the December 2011 end of Cain's GOP primary bid over sexual misconduct allegations.

"You know, Joe, I forgot how long our goodbye to Herman Cain was," said co-host Willie Geist, as Scarborough feigned tears. "He's still with us, by the way."

"He was the precursor to the 2016 nominee," said contributor Donny Deutsch. "If you looked at what he was doing the way he presented himself, the lounge act, that was a precursor to what showed up four years later."

"Please, please," Scarborough said, wiping his eyes, "don't talk politics at a time like this -- the memories. I was thinking of Redford and Streisand and 'The Way We Were,' then meeting again at the end. This is kind of like, Herman coming back into our life is kind of like Redford, and Streisand reaching out and just touching him on the cheek."