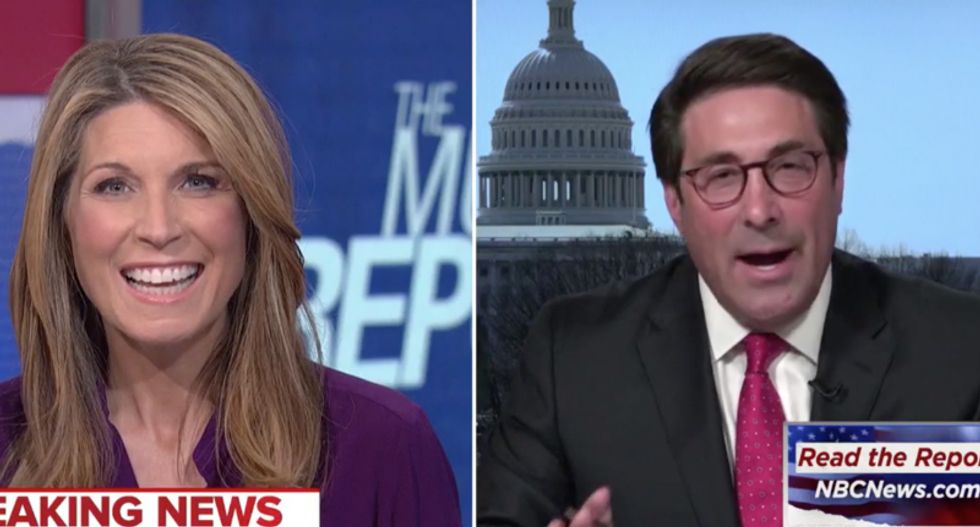 MSNBC's Nicole Wallace on Thursday had a heated exchange that spiraled into disdainful mockery with President Donald Trump's personal lawyer Jay Sekulow, as he pretended, among other things, he didn't know former White House counsel Don McGahn, whose testimony to Robert Mueller was described by Wallace as "devastating" to the president.

"The entire obstruction report seems to be made up of terribly incriminating depictions of the president's conduct," Wallace began. "I presume Don McGahn is someone you hold in high regard, Jay?"

"Yes or no question, Jay," she interjected. "Is Don McGahn someone you hold in high regard?"

"I don't know Don McGahn that well," Sekulow insisted as Wallace laughed in his face, and he began to read from the report.

"Jay, I've got my own copy of the report," interrupted Wallace sarcastically, and the two started shouting at each other as she shut down his filibuster. "You're here to offer your analysis. Do you believe Don McGahn?"

Sekulow, by this time red-faced offered a word salad that culminated in "when you have difficult questions of law and fact, you don't bring a case. That's exactly what happened here." But Wallace continued to focus on McGahn's statement to the special counsel.

"You and Don McGahn, the conservative legal circle is not a wide, wide ocean of people," Wallace challenged him. "You both served Donald Trump. Don McGahn's testimony as we see from the footnotes is devastating for your client, Donald Trump."

"I'm asking you what your assessment is, as the president's lawyer, of the content as described here by witnesses like Don McGahn," she repeated.

"My assessment, as is the assessment of the United States Department of Justice and ultimately Bob Mueller's, that there was no obstruction," Sekulow finally said.

"Is that a high enough bar for the president of the United States?" laughed Wallace. "'He didn't commit any criminal obstruction, let's go back to work?'"