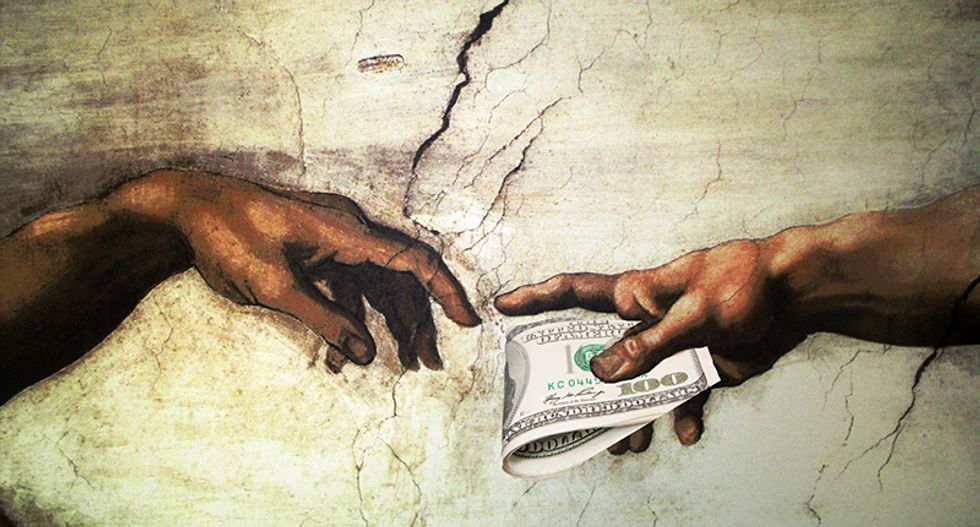 "The Creation of Adam" and cash (Photo: Vatican photoshopped by RawStory)

The worship of the almighty dollar is never more evident than with religious leaders who manage to work the system and avoid paying their taxes. For some pastors, faith in the prosperity gospel is stronger than the biblical gospels.

According to the Washington Post, fraud is thriving in U.S. churches, but it goes largely unreported either to church leaders or to the authorities.

Forensic accountant Alton Sizemore told Forbes reporter Walter Pavlo that Alabama churches have a particularly major problem. Pavlo cited one case in particular where a Catholic priest was arrested on drug trafficking, obstruction of justice and embezzlement. In that case, the bookkeeper alerted the city's Diocese, but nothing happened. They ultimately took it straight to the authorities.

The late Rev. Dr. David B. Barrett partnered with the Center for the Study of Global Christianity to chart a statistical understanding of Christian churches around the world. Barrett "was a pioneer in collecting data on churches and noticed a significant increase in embezzlement fraud during the 1980's," Pavlo wrote.

In his final study with the Center, he projected that "Ecclesiastical Crime" will top $37 billion across the globe in 2015. By 2015, it would be closer to $50 billion. The report contrasted that just $32 billion is spent annually on mission work through churches each year.

"Barrett worked with accounting fraud experts on his initial study who estimated that as much as 95 percent of fraud within churches goes undetected or unreported."

Todd M. Johnson, PhD, of the Center, said that it's attributed to people not wanting to "see the bad side of a nice pastor" or church member.

"I know he stole my money but I still think he's a wonderful person," one church member told Johnson.

Corrupt ministers using God to score millions and avoid taxes have become famous in recent years. Below are some of the worst offenders who've conned church members out of millions or used their positions to avoid paying taxes:

Like original sin, the Bakkers were some of the first corrupt pastors that used radio and television to dupe Americans into mailing their money to Jesus. The television pastors bought vacation homes, expensive cars, and, according to one report, even put air-conditioning in their dog's house.

More than 30 years later, the estate of Jim and Tammy Faye owes the IRS at least $5.5 million.

Pastor Hovind shot himself in the foot by announcing that he opposed any and all taxes and refused to pay them. In his case, his so-called church wasn't actually a church. It isn't shocking he was pinned down for not paying his taxes or those of his business that was not considered a church with tax-exempt status. Hovind scored in excess of $1 million annually, eventually growing to over $2 million. He didn't pay taxes on any of it.

Weinland took the extra step of predicting Jesus Christ would return to Earth before he was convicted and jailed for tax evasion. Still, the Kentucky pastor dodged paying $357,065 he owed to the government over five years.

Kenneth Copeland came under fire after his financial information was demanded by a Senate investigation.

At the time of the complaints, Copeland lived in a massive mansion "the size of a hotel," and owned a $20 million private jet. He claimed the plane was for spreading the word of God. After Hurricanes Katrina and Rita, Copeland pledged a mission to help, pulling in thousands in donations. He called it Angel Flight 44, which would deliver disaster relief to areas in need. The funds ended up going to repair the private jet, The Christian Post reported.

In January, one pastor was sentenced to prison for bilking his church while ministering about "Biblical Economics." According to Todd Coontz, God bestows financial blessings on those worthy of it. According to his website, he can then help clients manage their money according to Jesus Christ.

He was sentenced to five years in jail after he was convicted for tax fraud and evasion for trying to hide $1.7 million in income and assets. He funneled money from his companies into a fleet of cars that included Ferraris.

"His write-offs included more than $227,000 on clothes, another $140,000 on meals and entertainment expenses, including 400 separate charges at movie theaters," the Charlotte Observer reported. "Rather than pay himself a salary, Coontz ignored his accountants’ advice and took his living expenses out of his business accounts, including Cootz’ Rockwealth Ministries."

A former Baptist preacher, Shawn Lawson conned people for decades, including his own church and other pastors. First, he claimed he was an FBI agent, flashing his badge that turned out to be fake. His scam was to claim he would help people with various matters if they gave him cash, the Dallas Morning News reported. He was kicked out of two Indiana churches before moving to Texas and was ultimately arrested and jailed in 2015.

Pastor Joyce Meyer was the target of public scrutiny in the early 2000s after she was caught having the church pay for several expenses. One hefty expense was an "eight-bedroom, seven-bath, 7,000-square-foot Sunset Hills home, the title for which is held by the ministry and is valued at $521,000," Biz Journals reported. The title of the house is in the name of the ministry. She drove a silver Lexus SC 430 sports car that retailed at $62,000 at the time. The car was a "gift" from a church member who owned the dealership. Not once was there an inkling of impropriety in the church leadership, but she came under fire of a Senate probe that looked into the finances of six pastors.

"A breakdown of Joyce Meyer Ministries' statement of activities for 2014 shows that "total unrestricted revenue and other support" yielded $110,528,277," The Christian Post revealed in 2014.

Just months ago, Meyer posted an Instagram video of herself saying that her dedication to the "prosperity gospel" got out of hand.

President Donald Trump's favorite pastor, Paula White, has been under investigation for mismanagement of church funds. She and her husband own million-dollar homes all over the country, including in Trump Tower. She's survived investigations and accusations of stealing from her own church's collection plate. Before the 2016 election, White was caught selling "eternal life" stones for the bargan price of over $1,000.

She refused to cooperate in any investigation into her church or her, and the findings were ultimately inconclusive.

These are just some in a long line of church leaders who've taken worship to a whole new level when it comes to the cash they can score off of those search for God.