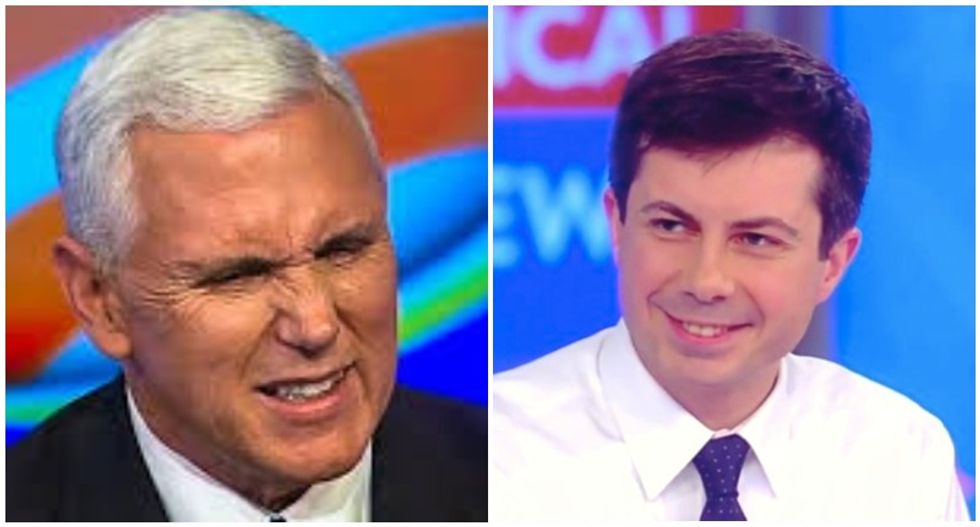 The South Bend mayor has a long history with Pence, the former Indiana governor, and he's not shy about calling out the vice president -- although Buttigieg insists it's not part of a master strategy, reported The Daily Beast.

“It’s not part of some master plan,” Buttigieg told the website. “I’ve just noticed that people really care about what’s going on with this vice president and president, and I recognize that as somebody who saw this up close, that I can help people understand what’s going on and what to be wary of when it comes to this [vice president].”

Buttigieg, a churchgoing Episcopalian, finds it "galling" to see Pence justify anti-LGBT laws with Scripture but continue serving at the side of a well-known philanderer who's been divorced three times.

“Just really breathtaking in its hypocrisy,” he said.

“If he’s serious about his understanding of his faith," Buttigieg said, "I would think that it would preclude joining forces with somebody like this president."

"When you see somebody who engages in sanctimony and has as rigid a view of religion as he does," Buttigieg added, "only be willing to throw it out the window completely and get on board with a project that is an affront not only to my understanding of Christianity, but also to his own, that’s the kind of hypocrisy for which scripture reserves some of its very harshest words — the idea of professing faith but taking worldly steps that fly in the face of that faith for the purposes of gaining power.”

Buttigieg, who raised $7 million in the first quarter in part due to his attacks on Pence, said he doesn't think this election should focus entirely on Trump or the vice president -- but he said their apparent immorality was an important issue.

“In many ways, that moral or tonal dimension of leadership is as important or more as the actual policies that they put forward," he said.

Buttigieg came out as gay while running for mayor, shortly after Pence signed into law the anti-LGBT Religious Freedom Restoration Act, and he personally experienced some of the discrimination that law legitimized.

The newspaper he subscribed to stopped arriving, and a neighbor told him the delivery man didn't want to give papers to Buttigieg after learning he was gay.

“There are really consequences to this,” Buttigieg said. “Me not getting a newspaper is a nuisance, but there are still so many cases of real harm coming, especially to LGBT youth who don’t know if they belong. That’s everything from a gay kid who’s still being pushed into conversion therapy to a transgender student who just has to use the bathroom like everyone else getting the message from her own president that policymakers can’t tell the difference between her and some kind of predator.”

A group of election reform bills that Republicans say would make elections more secure and speed up results would actually make voting more difficult and time consuming, and are solutions to nonexistent problems, critics said Monday.


One of the bills would be impossible to implement in some Arizona counties, while others seem fated for a veto if they ever reach Gov. Katie Hobbs.

WASHINGTON — Members of Congress receive thousands of threats a year, though just a fraction of the people who call, mail or email will ever be prosecuted — a situation that’s of great concern to the police who guard members.


Just 22 of the 7,501 threats lobbed at members during 2022 led to prosecution, the U.S. Capitol Police confirmed to States Newsroom on Tuesday. It’s a statistic the chief of police has said needs to change.