The sorrow of watching the Notre Dame burn 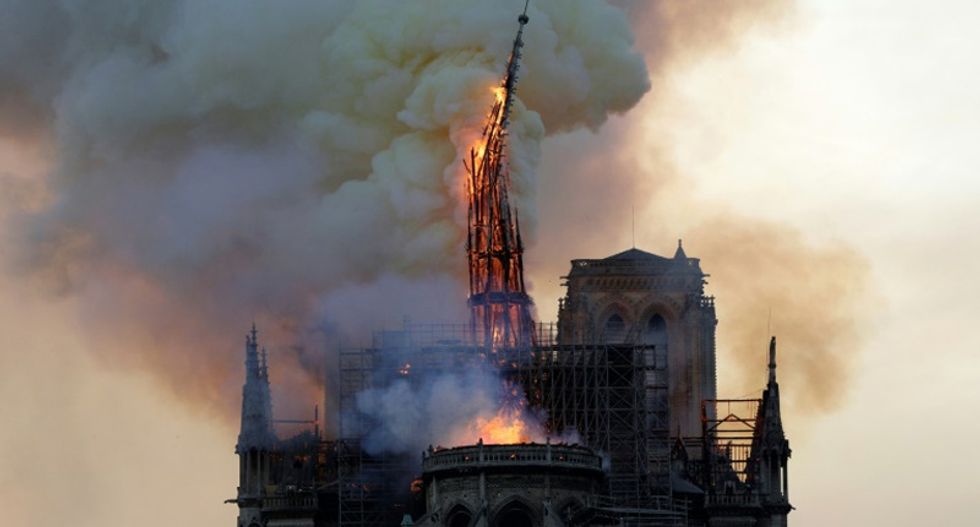 On the 20th day of Brumaire during the Second Year of the revolutionary order, a spectacle was held inside the newly consecrated Temple of Reason. Upon the altar of what had once been the magnificent cathedral Notre-Dame de Paris at the very heart of the greatest city in Christendom, the religious statues were stripped away (some decapitated like the heads of the overthrown order) and the whole building was turned over to a festival for what the most-radical of Jacobins called the “Cult of Reason.” In the hopes that this atheistic faith-of-no-faith would become the state-sponsored religion of the new regime, the revolutionaries staged their own observance, with young girls in tri-colored sashes performing a type of Morris dance about a statue of the Goddess Reason.  Such was just another occurrence among the competing factions of the Revolution, and which saw the dechristianization of France, including not just the iconoclasm of smashed stain-glass and white-washed images, but the execution of perhaps 30,000 priests. Less than a decade later Mass would once again be celebrated upon Notre-Dame’s altar.

Within the shadow of its spire – which as of today no longer stands – the great Renaissance essayist Montaigne would have walked. By the massive rose window which filtered natural light into the ring of cobalt blue and emerald green, solar yellow and fire red, Rene Descartes may have contemplated his Cogito. By its gothic flying buttresses and underneath its simultaneously playful and disquieting gargoyles the novelist Victor Hugo both celebrated her stone walls and arches while advocating for her 19th century restoration. In 1323 the scholastic theologian John of Jandun would write of the cathedral that she “deservedly shines out, like the sun among stars.” And through it all, over a millennium of Parisian history, the cathedral stood guard from its island in the Seine.  Which is not to say that the cathedral hadn’t been destroyed before, and that it wouldn’t be destroyed again. Notre-Dame withstood the Wars of Religion which burnt across France during the sixteenth-century and Hitler’s orders to leave not a stone of Paris standing when the Nazis retreated at the end of the Second World War, and yet the cathedral endured. Since the twelfth-century Notre-Dame has survived, and while we watch with broken hearts as her spire collapses into the burning vaulted roof during this mournful Holy Week, we must remember that Notre-Dame will still be standing tomorrow.

Sorrow for the destruction of something so beautiful, so perfect, must not obscure from us what a cathedral is. A cathedral is more than the granite which composes her edifice, more than the marble which lines the nave. More than the Stations of the Cross and the statues; more than the Crucifix which punctuates the altar. A cathedral is all of that, but it is also an idea; an idea of that which is more perfect than this fallen world of ours. More mysterious, and more powerful, and more beautiful. When we see push notifications alerting us to the fire of this April 15th, when we see that tower which points to the very concept of God collapsing above her navel, it can feel as if civilization itself is burning. As if watching the Library of Alexandria be immolated on Facebook live, or reading the live tweeting of the dissolution of the monasteries. In this age of uncertainty, of rage, of horror, and of violence; of the decline of democracy and the heating of the planet; it can feel as if Notre-Dame’s fire is as if watching the very world itself be engulfed. Which is why it’s so important to remember what a cathedral is, what Notre-Dame is.

Skeptics can reduce that which is associated with the phrase “High Church” to an issue of mere aesthetics, as if in our post-Reformation, post-secular world the repose of a cathedral is simply a mood or a temper and not a profound comment in its own right. An allegiance to the sacredness of silence, of the holiness of light refracted onto a cold stone floor. Minimalism makes its own offers and promises, and requires its own supplication, and the power of simplicity and thrift should not be dismissed. But a cathedral makes its own demands – a cathedral is beautiful. The intricacy of a medieval cathedral is not simply an occasion for art historians to chart the manner in which the romanesque evolved into the gothic, or for engineers to explicate the ingenuity of the flying buttress. Notre-Dame isn’t simply a symbol of Paris, nor a landmark by which a tourist can situate themselves. A cathedral is larger than the crowds which line up to take selfies in front of it; a cathedral more significant than the gift shops and food trucks which line the winding cobble-stoned streets that lead up to it. A cathedral is an argument about both God, but also humanity and the beauty which we’re sometimes capable of.

Tomorrow the world will be less beautiful than it was this morning, and this is in a world which has precious little beauty that it should be able to give up. That Notre-Dame should be burning this April evening is a calamity, a horror. It is the loss of something that is the common treasury of humanity, which belongs not entirely to the people of France, nor only to those whom are Roman Catholics, but which rather sings of those yearnings of all women and men, living in a world not of our own creation but trying to console each other with a bit of beauty, a bit of the sacred. To find that meaning in the cathedral’s silence, in that movement of light and shadow upon the weathered wooden pews and the softness of the grey walls. The 17th century English poet George Herbert wrote of “A broken ALTAR… Made of a heart and cemented with tears,” as indeed may describe the crowds gathering along the Seine and singing hymns to our burning cathedral this spring night. Herbert’s poem is an apt explanation of what a cathedral is. A cathedral is a person. Her spine is the nave, and the transept her arms; the window her face, and the spire her head – the altar a heart. And though a cathedral is as physical as our finite bodies, threatened by incendiary and crowds, by entropy and fire, its soul is just as eternal.

If there is something to remember, it’s that in the era before steel and reinforced concrete an anonymous mason would begin work with his brothers on a cathedral that his children would most likely never see completed. Perhaps his grandchildren would never live under its full height either. To work on a cathedral was a leap into a faith that we can scarcely imagine in our era, to work towards a future you’d never see, and yet to embrace that which is greater, more sublime, more perfect that you are. Our attitude of disposable consumerism and exploitative capitalism makes such an ideology a foreign country to us, yet if we’re to solve any of those problems that face us today – from climate change to the restoration of democracy – it must be with the faithful heart of a medieval mason who toils with the knowledge that a spire will rise above Paris – again.

Ed Simon is the Editor-at-Large for “The Marginalia Review of Books,” a channel of the “Los Angeles Review of Books.” A frequent contributor at several sites, his collection America and Other Fictions: On Radical Faith and Post Religion will be released by Zero Books in November of 2018. He can be followed at his website or on Twitter @WithEdSimon.