How Trump's second term would be utterly terrifying 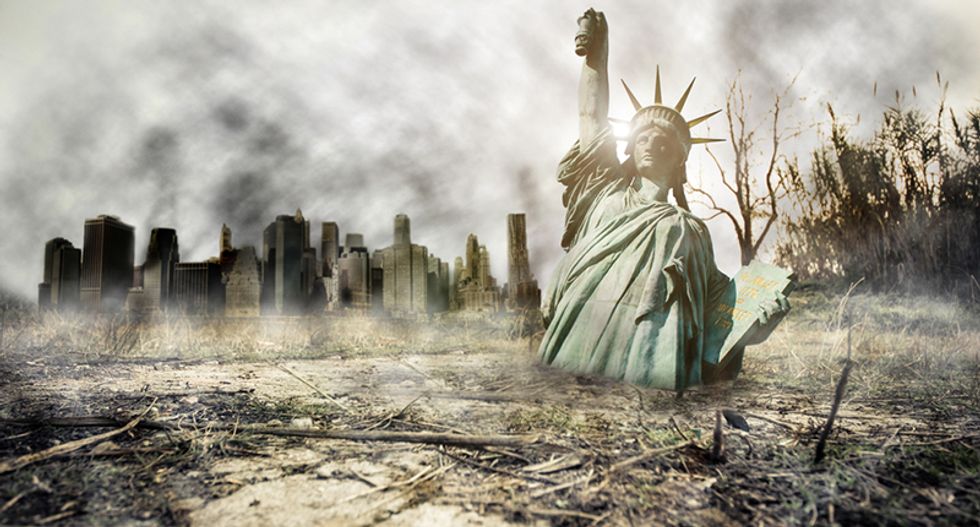 If President Trump manages to win re-election it will be in no small part due to the fact that he's exhausted the opposition with so much outrageous conduct that regular people simply can't find the emotional energy to engage in the fight anymore. This week we are expecting to see the result of Attorney General Bill Barr's redacted version of the Mueller report. It's very possible that it will leave us with that now familiar feeling that we can believe the president or believe our lying eyes.

We know we saw Trump praising Russian President Vladimir Putin in truly odd fashion throughout the 2016 campaign. We know we saw him deny the Intelligence community's unanimous conclusion that the Russians interfered in the election, and we know he lied repeatedly to the public about a major real estate deal he was negotiating during the campaign, all of which was at best suspicious and at worst disqualifying. Yet, even if the report lays out in colorful detail that although investigators "did not establish" that Trump committed a crime but did establish that he was ignorant and unethical, it will go down as a victory for him. That's how degraded our standards have become in just two short years.

So far the country has survived, even if we are a bit worse for wear.  But consider the fact that the more Trump gets away with, the bolder he is becoming. Last week we learned that the president of the United States is offering pardons to officials who will agree to break the law. CNN reported:

During President Donald Trump’s visit to the border at Calexico, California, a week ago, where he told border agents to block asylum seekers from entering the US contrary to US law, the President also told the commissioner of Customs and Border Protection, Kevin McAleenan, that if he were sent to jail as a result of blocking those migrants from entering the US, the President would grant him a pardon, senior administration officials tell CNN.

It's unknown whether Trump ever made a similar offer to the recently fired Homeland Security secretary, Kirstjen Nielsen, but we do know that he repeatedly exhorted her to break the law. The New York Times reported:

The president called Ms. Nielsen at home early in the mornings to demand that she take action to stop migrants from entering the country, including doing things that were clearly illegal, such as blocking all migrants from seeking asylum. She repeatedly noted the limitations imposed on her department by federal laws, court settlements and international obligations.

The White House denies all this, of course. But it's completely believable because he does these things in public as well as privately.  He recently told the press, "We have to get rid of judges" and said that border patrol agents should defy the judiciary if they were told to allow asylum seekers' claims. At one point after he sent troops to the border he changed the rules of engagement:

Anybody throwing stones, rocks, like they did to Mexico ... where they badly hurt police and soldiers of Mexico, we will consider that a firearm because there's not much difference when you get hit in the face with a rock. ... They want to throw rocks at our military, our military fights back. We're going to consider it — I told them, consider it a rifle.

This would be illegal for both the military and the border patrol and Trump later walked back the order saying he "hoped" the military wouldn't have to shoot people.

Of course that's not the only time Trump has told government officials to break the law. Former Secretary of State Rex Tillerson has said he often had to tell the president he was proposing illegal actions, and that when Trump was told he couldn't do that he'd become very frustrated. (Keep in mind that Tillerson came from the private sector, just like Trump, but somehow seemed to have a basic understanding of ethics and the law.)

And recall this disturbing report from a few months back:

President Trump told the White House counsel in the spring that he wanted to order the Justice Department to prosecute two of his political adversaries: his 2016 challenger, Hillary Clinton, and the former F.B.I. director James B. Comey, according to two people familiar with the conversation. The lawyer, Donald F. McGahn II, rebuffed the president, saying that he had no authority to order a prosecution. Mr. McGahn said that while he could request an investigation, that too could prompt accusations of abuse of power. To underscore his point, Mr. McGahn had White House lawyers write a memo for Mr. Trump warning that if he asked law enforcement to investigate his rivals, he could face a range of consequences, including possible impeachment.

It appears that Trump's new attorney general may not have quite the same qualms as the former McGahn. Barr has agreed to re-investigate the "origins" of the Russia probe and previously said he believed the bogus Uranium One scandal should be further examined. You'll notice that Trump has made his personal wishes about this very clear:

The list of Trump's lawlessness since he's been in office is very long. And it isn't just him. Aside from the unprecedented number of corrupt officials who have been forced to resign, his entire administration is defying any laws it sees as barriers to its political agenda. Just last week, the Treasury Department has indicated it plans to defy the law that allows Congress to obtain the president's tax returns. It's just what they do.

This has been a strong feature of the administration from the beginning. I think the idea was best articulated by the man who is Trump's closest adviser on immigration, White House adviser Stephen Miller. He put it this way back in February of 2017 when the first "Muslim ban" executive order was signed:

The end result of this ... is that our opponents, the media and the whole world will soon see as we begin to take further actions, that the powers of the president to protect our country are very substantial and will not be questioned.

So far the courts have been able to stop the president's lawbreaking for the most part.  But if he wins re-election, whether he "gets rid of judges" or simply relies on all the new right-wing appointees Mitch McConnell has rushed through on a Senate assembly line, it's reasonable to assume his "substantial" powers will be questioned far less often.