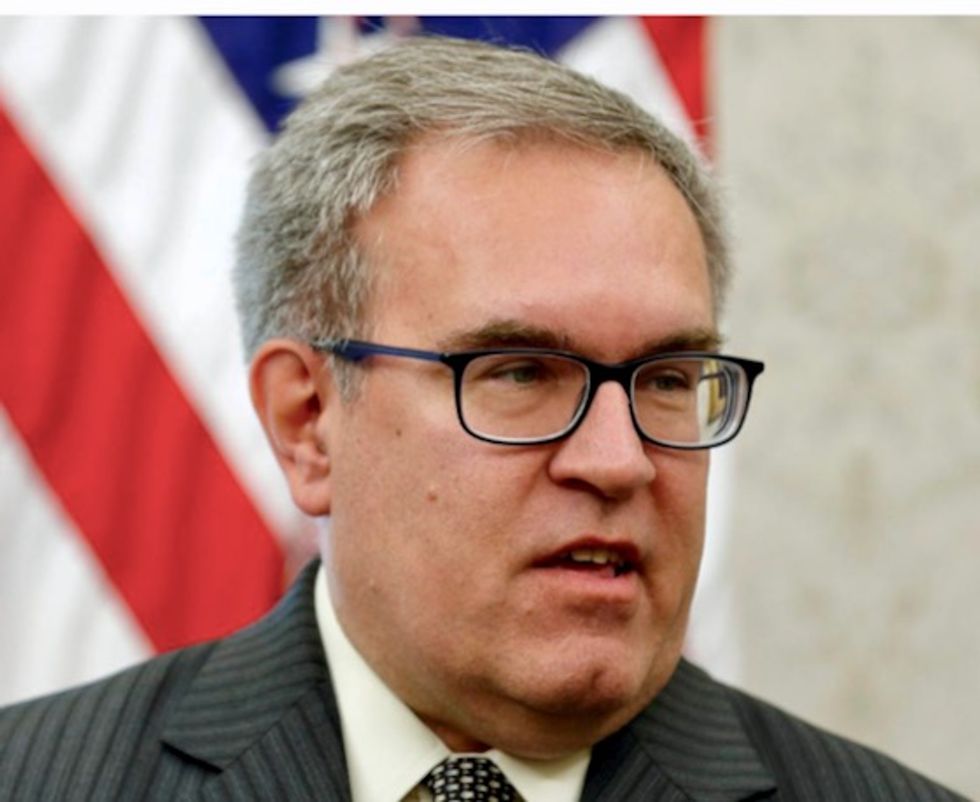 Americans rely on the Environmental Protection Agency to set pollution control standards that protect their health. But on April 11, an important scientific advisory group submitted recommendations to EPA Administrator Andrew Wheeler that propose new and dangerous ways of interpreting findings on the health effects of air pollution.

Wheeler has already dismissed a qualified, independent panel of air pollution scientists appointed by the Obama administration to advise the agency on health effects of fine particulate air pollution – a step that hundreds of scientists, including me, have criticized. As a result, members of EPA’s Clean Air Scientific Advisory Committee – a group of seven independent experts mandated under the Clean Air Act to advise the agency – have admitted that they don’t have enough expertise to make appropriate judgments.

Despite this, the committee submitted its recommendation anyway. Its approach appears to be heavily influenced by a rule on “Strengthening Transparency in Regulatory Science” that former EPA Administrator Scott Pruitt proposed in 2018. In my view, this measure – which Wheeler is now preparing to finalize – could threaten Americans’ health and well-being by weakening the scientific basis for air pollution regulations. 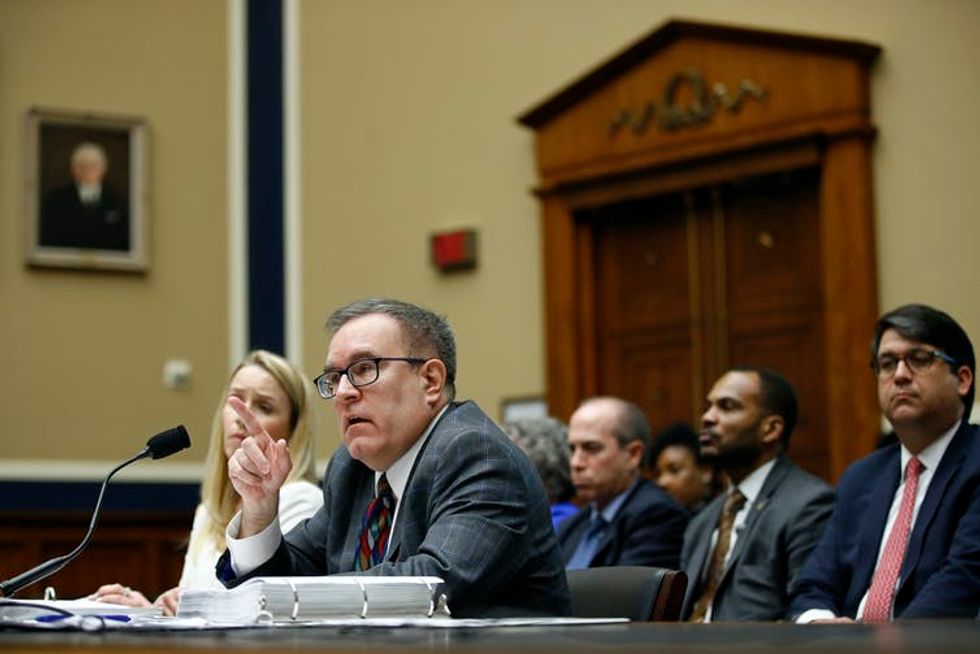 Scientists have accused EPA Administrator Andrew Wheeler, shown testifying to Congress on April 9, 2019, of downgrading the role of science in air pollution regulation.

The dose makes the poison

The relevant part of this proposal targets assumptions about how people’s bodies respond to pollution. These are called dose-response models, and are critical to setting health-based pollution standards. They are based on studies in which human or animal subjects are exposed to very high levels of a pollutant, then monitored to see whether they develop cancer, asthma or other pollution-related illnesses.

At higher exposure levels, there tends to be more disease. When pollution is lower, there typically are fewer cases. Scientists call this relationship the dose-response function, although in air pollution research we usually refer to it as concentration-response, because it is hard to accurately measure a dose of air pollution.

Researchers take findings from studies and apply them to concentrations in the real world, which typically are much lower than those used in the laboratory. As a result, scientists often have only a limited amount of research data that shows how people respond to the lower concentrations commonly found where people live.

Historically, to protect people’s health, researchers have assumed that even low levels of exposure have some effect on health, though studies don’t always include specific data on that. So they extrapolate the harm documented at high levels of pollution all the way down to zero. This produces an estimate known as a linear non-threshold response. It assumes that there is a linear relationship between pollution concentrations and disease, and even low levels of exposure will have some effect on health. “No-threshold” means there is no level below which we would expect to see zero effects. 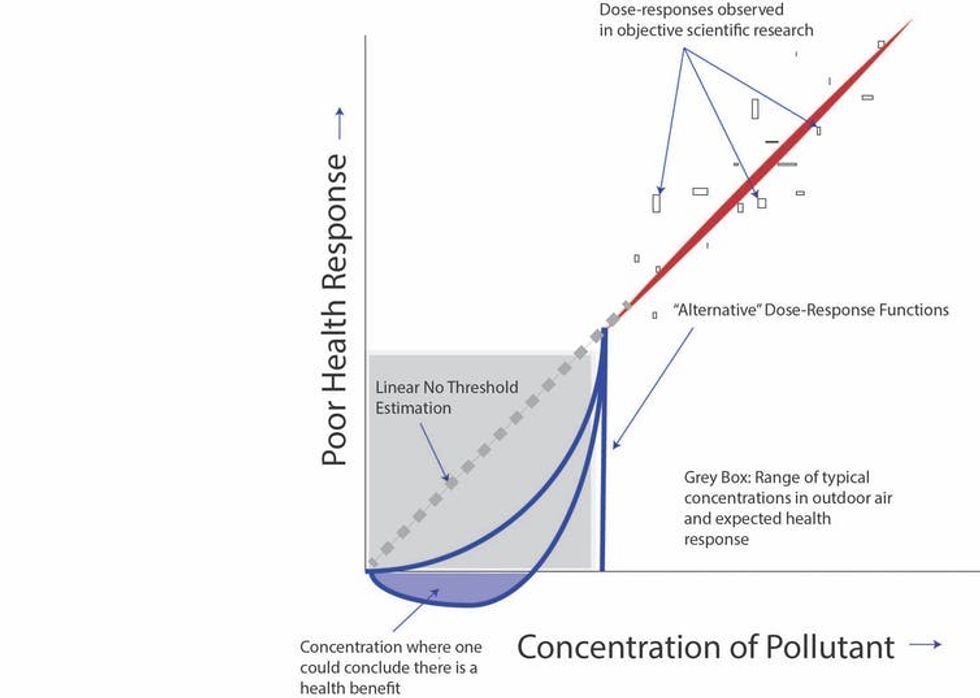 A simplified example dose-response curve showing data from research studies (open boxes). The red line is a linear dose response, and the grey dashed line is a linear no-threshold model. ‘Alternative’ models (solid dark lines) show a sublinear model, a J-curve and a threshold model. Each of these would underestimate health effects at ambient concentration levels, making the expected public health risk look smaller. A J-curve (middle line) could actually suggest that low doses of pollution are beneficial to health.

The proposed rule would require the EPA to consider oddly specific scientific theories about dose-response relationships, using differently shaped dose-response curves. Doing so could lead to the conclusion that low doses of air pollutants are harmless. This is an outlying view in science that is not consistent with views of independent experts who study air pollution and health.

Alternate dose-response models are important and complicated topics in toxicology. It is widely agreed that some things, such as physical exercise, vitamin D and possibly alcohol can be good for you in low doses but harmful in high doses. But using vague “alternative models” to estimate risk from environmental pollutants would require the EPA to ignore scientists’ best estimates of how people actually respond to lower concentrations of those substances.

It also would enable political appointees to base regulatory judgments on opinion, rather than on the weight of evidence from the broad scientific community. The EPA could even choose to assume – wrongly – that exposure to lower doses of pollution is good for you, as some of its newly appointed science advisers have implied.

Alternatively, agency leaders might conclude that there isn’t enough data to support the assumption that exposure to low levels of a pollutant will cause harm. Instead, they might set standards at the lowest levels tested by scientists, which are often many times higher than levels we experience in daily life. This would dramatically weaken or eliminate many existing regulations.

In fact, the Clean Air Scientific Advisory Committee’s recommendations clearly show this is the approach they are now taking.

Relying on a linear non-threshold response is a conservative approach to regulation. Scientists do not fully understand how people are affected by these lower concentrations, so it makes sense to be careful and assume such exposures can cause harm – especially in vulnerable populations, such as children and the elderly.

The Clean Air Act requires the EPA to “protect public health with an adequate margin of safety,” which means the agency should set exposure standards low enough to protect all Americans, but err on the side of additional safety. One recent paper by a large group of air pollution researchers concluded that standard assumptions about harm from low doses aren’t conservative enough.

This study, which examined dose-response relationships for exposure to fine particulate air pollution in 16 countries, found more illness than expected was occurring at lower concentrations. This suggests that air pollution levels occurring daily in parts of the United States may cause more disease and death per unit than scientists previously thought. 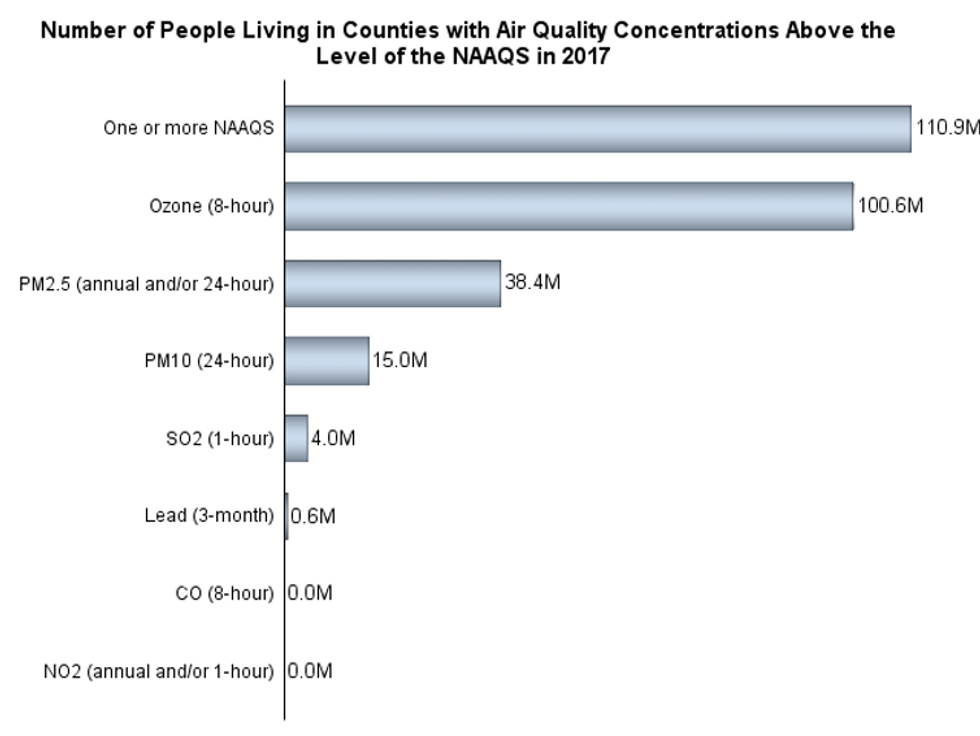 Approximately 111 million people in the United States lived in counties with pollution levels that exceeded federal standards in 2017.

Modern air pollution rules based on the linear no-threshold model protect Americans from the worst harms of air pollution. But no society is completely pollution-free, so regulators must choose what levels of air pollution and corresponding adverse health outcomes they are willing to allow.

It is up to policymakers to decide whether one extra asthma case, or 1 million, is acceptable. But estimating how populations are likely to be affected by lower concentrations is a question for scientists. I believe it is inappropriate and dangerous for political appointees to intervene on these issues – especially when they are pushing unproved arguments that pollution might be good for us.