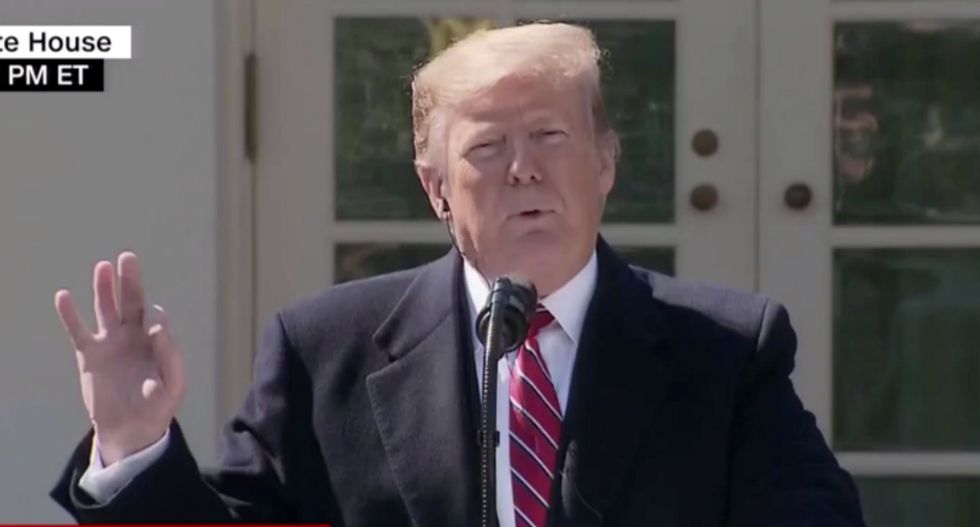 On Thursday, the New York Times reported that members of Special Counsel Robert Mueller's team claim Attorney General William Barr downplayed the conclusions of the Russia probe, telling the Times that the full report contained far more damning information than is evident in the memo.

President Trump and his associates celebrated the Barr statement as a full exoneration -- even though the document explicitly stated that the probe had not exonerated Trump on obstruction of justice charges.

Raw Story spoke with Dr. Bandy X. Lee about the wrap up of the years-long investigation and how the President and his critics have responded.

Lee is a psychiatrist at Yale School of Medicine who has taught at Yale Law School for over 15 years. She is an authority on violence prevention and President of the World Mental Health Coalition. Her New York Times bestseller, “The Dangerous Case of Donald Trump: 37 Psychiatrists and Mental Health Experts Assess a President,” has just been released as an expanded edition, alongside a major Washington conference on presidential fitness (dangerouscase.org).

Raw Story: Liberals are awaiting the release of the full Mueller report. But it seems increasingly likely that expectations of criminal wrongdoing -- at least when it comes to Russia -- aren't really contained in the report. What's a good way for people who are opposed to the Trump Presidency to respond?

Dr. Bandy X. Lee: Imagine an ocean liner. You need many components to be functioning so that you can get to where you need to go and not sink into the sea. You have to have an intact body, the internal mechanics or software has to be working right, and you have to have an able captain. Let’s say you inspect the body, and it is found to be intact. You still have to check the software and the captain.

A former White House ethics counsel told me there are “Three C’s” plaguing this presidency: collusion, corruption, and capacity. We don’t know if collusion is out, but criminal conspiracy seems to be—so far.

Now, is Robert Mueller’s report—at least the reporting of the report—free of corruption? The attorney general appeared to be cherry-picking what he wished to highlight, attempting to redact not only classified and ongoing investigation information but plenty of other material. He resisted the demands of numerous experts, 83 percent of polled Americans, and an overwhelming 420-to-0 vote on a House resolution calling for release of the full report. Meanwhile, he used the delays to set a certain tone. All this is important, as we have been saying that the president’s psychology will be reflected in those he appoints: Jeff Sessions, as we saw, was pushed out for not being corrupt enough.

Raw Story: Does this also apply to his appointment of Supreme Court justices?

Dr. Bandy X. Lee: Absolutely. We need both preservation and innovation to survive, and so it is not about being liberal or conservative: it is about health versus disease. That Donald Trump would appoint a justice—Neil Gorsuch—who would argue that the death penalty need not be painless, defying American norms against cruel and unusual punishment, is unsurprising given the president’s propensity for cruelty. When he was about to nominate Brett Kavanaugh, a group of mental health professionals wrote to Congress that a president so apparently lacking in mental capacity would likely choose a justice who similarly lacks capacity, and indeed the confirmation was besieged with sexual assault allegations and thousands of law professors opposing him for lack of “judicial temperament.”

Raw Story: So how does “capacity” relate to the Mueller report?

The report reveals many potential problems regarding mental capacity. For example, the absence of conspiracy with Russians does not eliminate past behavior, such as siding with Russian adversaries over our own intelligence agencies, or actively taking measures that increase Russia’s global standing and diminish ours. Absent a rational explanation, such as conspiracy, what was he doing? We have to consider incapacity as an explanation.

So imagine you are having a heart attack. You don’t go to a dietician to work on your diet; you go directly to a heart doctor. In any other setting, you would take someone with the president’s symptoms of impulsivity, erratic thinking, and belligerent behavior for a mental health evaluation.

Currently, Mr. Trump’s rally speeches have been growing steadily less coherent, with rambling sentences, repetitions, and word-finding difficulties. A few weeks ago, there was the “Tim Apple” episode, and the other day he referred to Venezuela as a company, confused his father’s birthplace with his grandfather’s, and repeatedly pronounced “oranges” instead of “origins.” He even defensively said, “I’m very normal.”

Signs of mental incapacity were numerous even before recent declines, and we have not investigated them like collusion or corruption. Just a few include:

There's impairment in his ability to stay grounded in reality: Mr. Trump’s notions of what is real seem driven by his own internal thoughts, emotions, and needs, such as when he declares a national emergency without evidence or dismisses official death tolls in Puerto Rico in the wake of Hurricane Maria.

Impulsivity: from spontaneously mocking those he disapproves of, such as calling San Juan Mayor Carmen Cruz “crazed and incompetent,” to making announcements of international consequence via Twitter without consulting any advisors, Mr. Trump shows problems inhibiting his behavior on a daily basis.

He has an investment in getting his way rather than serving the public: Mr. Trump appears to be unable to let go of personal vendettas even after they are proven detrimental to the nation, such as when he brought up dismantling the Affordable Care Act without a plan for the millions of lives he would put at risk.

And he's shown an inability to perceive his limits: Mr. Trump shows a severe inability to reflect realistically on the limits of his own knowledge, frequently declaring that he knows better than the experts.

Then there's his attraction to conspiracy theories: Mr. Trump recurrently espouses and encourages conspiracy theories, such as that “the deep state” is out to get him or that “invading migrants” are threatening the country, claiming that these warrant violent uprising or closure of the borders.

Raw Story: What can be done?

We know what to do and need not feel helpless. He is long overdue an evaluation, as even non-mental health professionals starkly revealed at the Washington conference. Mental health evaluations are very similar to legal investigations: even when a crime is obvious, you need an investigation to measure against existing standards and determine the precise indictment. Likewise, you need an evaluation to assess severity of symptoms and establish a definitive diagnosis. The course of treatment then follows.

I don’t believe we should declare a diagnosis without an examination, just as we shouldn’t indict someone without the proper legal process. One cannot use one’s own hired doctor to declare oneself “fit to serve,” as Mr. Trump has done, just as one cannot make one’s own hired lawyers prosecutor and judge. Capacity evaluations do not require consent, and the people, as the president’s employers, can demand one. If he is unwilling, he can resign. A pilot flying 300 passengers should have an intact mind; he is the pilot of 300 million citizens.