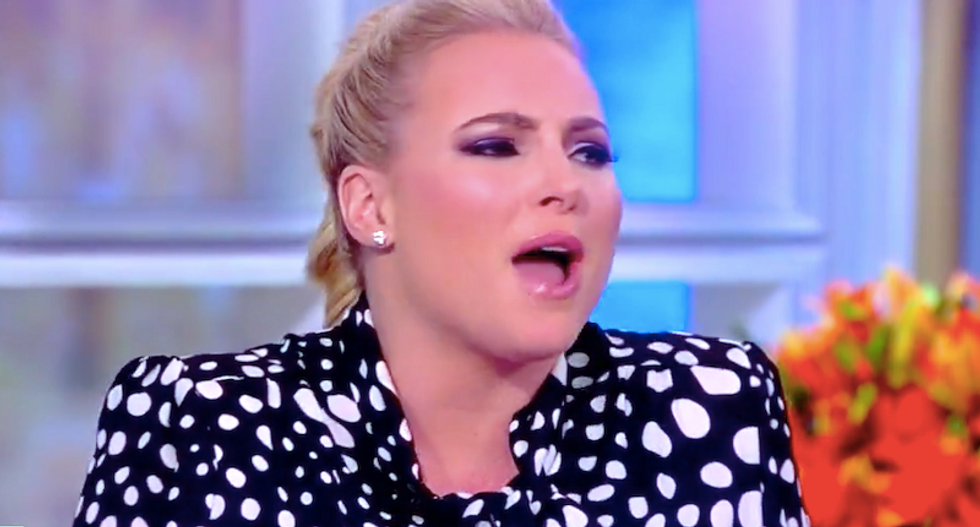 "The View" co-host Meghan McCain flew into a rage after the studio audience turned against her attacks on President Barack Obama.

The panelists were discussing whistleblower revelations that the White House had intervened to grant security clearances to 25 Trump administration officials despite serious concerns, and McCain disagreed that Obama's administration had been free of similar scandals.

Co-host Joy Behar challenged her to name an Obama scandal, and McCain bristled.

"I don't want to do this with you this morning," she said, but Behar pressed her to name just one. "The Iran deal, No. 1, billions of dollars in unmarked bills in the middle of the night given to Iran. That's a big scandal."

Behar pointed out that money was part of $1.7 billion owed to Iran as part of an unconsummated military equipment deal struck before the 1979 revolution, and McCain again groused.

"I told you I didn't want to do this again," she said.

Co-host Ana Navarro listed overblown Obama scandals, like the time he wore a tan suit or used Grey Poupon mustard, and that only made McCain angrier.

"Part of the problem for Republicans like me, so put off by Trump, as everyone knows," McCain said. "I hate Trump -- I didn't vote for him before, I don't plan to voting on him next time for all the personal reasons. The problem is, when you put the Obama administration up as this pristine, scandal-free, perfect administration that never did anything wrong -- for conservatives and Republicans there are a lot of policies that were put into place that rational conservatives disagreed with."

"I think part of the problem is, it feels very judgmental," she continued. "If you didn't like the Obama administration and you had a problem with the Iran deal, that's how you got Trump. It's because you're lecturing all of us."

Co-host Sunny Hostin said disagreeing with Obama's policies were completely different from opposing a president who lies every day about topics great and small, and whose personal and business conduct was under criminal investigation -- and McCain continued shouting.

Hostin interjected to say that, compared to Trump, Obama was relatively scandal-free.

"I'm not giving praise to this administration," McCain said. "I'm a Republican, and I'm saying -- I'm telling you, that is how we got Trump, and it's how you're going to re-elect him."

She then warned that everyone would be sorry they hadn't listened to her warnings.

"When he's re-elected, which at this point, I think he's going to be," McCain said.

Behar rolled her eyes, saying, "Oh my god," and the audience booed.

"I hope you'll listen to the points that I have given you," McCain said, and realized she'd lost everyone in the room. "I'm used to the audience booing me, I'm fine."