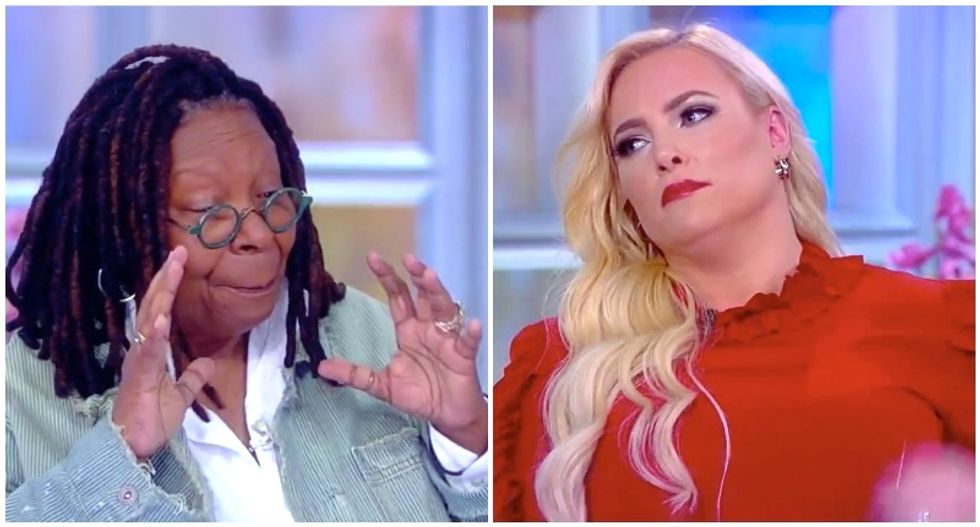 "The View" host Whoopi Goldberg was forced to step into a disagreement between Joy Behar and Meghan McCain during a debate on immigration.

Goldberg returned Monday from another illness-related leave of absence, and she had to separate the frequent sparring partners from bickering over President Donald Trump forcing out Homeland Security secretary Kirstjen Nielsen.

"This is a hardline issue for people who live in border states," McCain said. "Many friends of mine -- this is the No. 1 and only issue. If we sit here and act like there isn't a crisis, (that) it's crazy people living in border states that think there's a crisis, that's a winning ticket for Trump in 2020."

Behar said she agreed with interim Homeland Security secretary Kevin McAleenan, who has stressed the need to continue foreign aid to Honduras, Guatemala and El Salvador.

"This guy coming in wants to help those countries, that's the way to solve these problems," Behar said. "Keep them there, happy, or whatever. Give them a house, give them food, help them, help their children, stop the crime rates."

"We've had a bunch of liberal guests that don't want to send aid, at all," McCain said.

"I've listened to you, let me finish," Behar said.

That didn't sit well with McCain.

"Part of your job is to listen to me," she said, brushing her hair over her shoulder as the audience hooted. "I'm just saying."

"Here's what's not going to happen today," she said. "We're not going to do this. Everybody gets a conversation piece, everybody gets to say their piece, and we don't need to comment if we don't like what we're hearing. Just let people talk."

She then turned to Behar and invited her to finish speaking.

"I forgot what it was," Behar said.