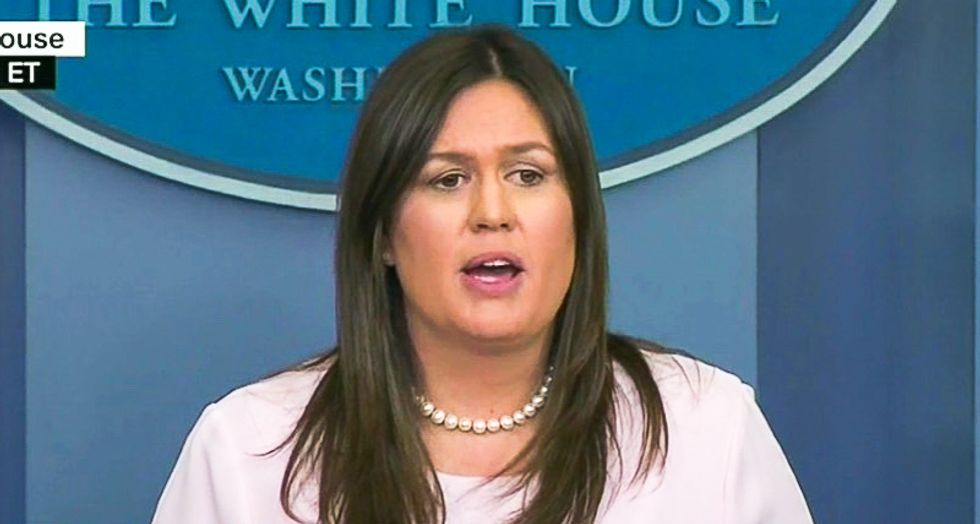 Outrage is growing after the redacted version of the Mueller report revealed Sarah Huckabee Sanders admitted to lying to reporters, with the report stating point blank her lies were "based on nothing."

She told the FBI it was "a slip of the tongue" and "in the heat of the moment."

That's clearly false, because she repeated it over and over again.

Huckabee Sanders told reporters over the course of at least two days in May of 2017 that "countless" numbers and "a large number" of FBI agents contacted her personally to offer support for President Donald Trump firing Jim Comey as FBI Director.

According to the Mueller report, that's just plain false.

Here's video of the second day when Huckabee Sanders repeatedly lied to reporters:

And here's a portion from the official White House transcript:

MS. SANDERS:  Well, I can speak to my own personal experience.  I’ve heard from countless members of the FBI that are grateful and thankful for the President’s decision.  And I think that we may have to agree to disagree.  I’m sure that there are some people that are disappointed, but I certainly heard from a large number of individuals — and that’s just myself — and I don’t even know that many people in the FBI.