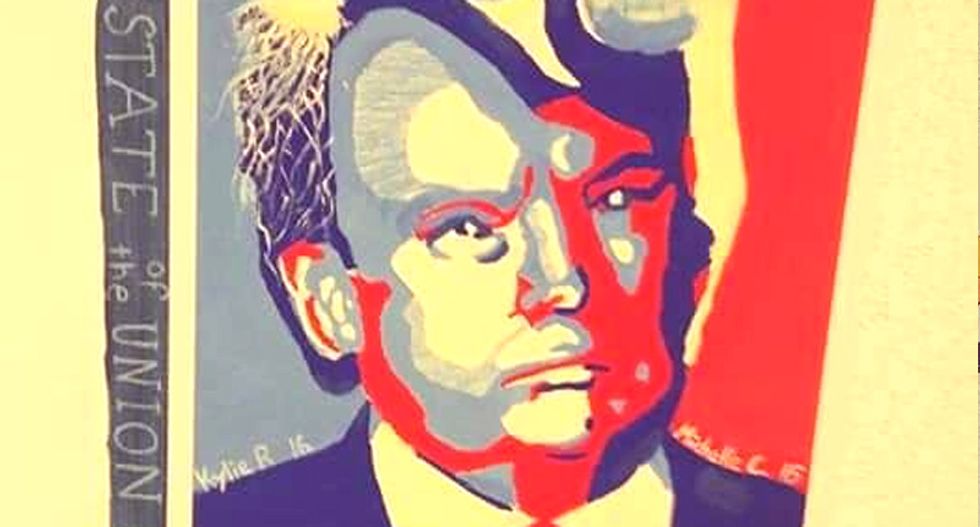 "I've had him testifying already for 30 hours and it's really -- so I don't think I can let him and then tell everybody else you can't, " Trump said.

"Especially him, because he was a counsel, so they've testified for many hours, all of them, many, many, many people. I can't say, 'Well, one can and the others can't.' I would say it's done."

"We've been through this. Nobody has ever done what I've done. I've given total transparency," he added. "(Congress) shouldn't be looking anymore."

Trump's statement was the latest in a series of efforts to derail Congressional investigations, leading critics to wonder if the President is undermining the legislative branch and continuing to obstruct justice. Last week, he said he'd fight any subpoenas from Congress.

Raw Story spoke with Philip Zimbardo, Ph.D., Professor Emeritus at Stanford University, about why Trump seems to do and say as he pleases, regardless of institutional norms and procedures -- whether that's blasting his critics on Twitter, slamming Congress, or embracing world dictators -- and why that's so dangerous.

Zimbardo is a world-renown educator, scholar, and researcher perhaps best known for his landmark Stanford prison study. Among his more than six hundred publications are the bestseller The Lucifer Effect and such notable psychology textbooks as Psychology: Core Concepts, 8th edition, and Psychology and Life, now in its 20th edition.

He is a contributor to “The Dangerous Case of Donald Trump: 37 Psychiatrists and Mental Health Experts Assess a President,” edited by Bandy X. Lee, and a presenter at the interdisciplinary conference on presidential fitness in Washington, DC (dangerouscase.org).

Raw Story: Can you tell me why you and so many other mental health professionals are staking out the position that Donald Trump is particularly dangerous?

Philip Zimbardo: At no other time in U.S. history have so many mental health professionals come forth to speak their concerns about a president, of any party.

Numbering in many thousands, they have applied many descriptions to illustrate the current dangerousness of Donald Trump. None can be definitive without a full evaluation, but what we can be sure of is his present hedonism—or living in the moment with no interest in either the past or future.

Decisions are made on the spur of the moment with little thought of future consequences, and without regard to whether or not they were effective in the past.

Present hedonists seek the novel, the different, the unusual, and thus are easily bored by the familiar and traditional. This combination of cognitive and emotional dimensions often sets them on a path of addictions—the ultimate immersion in the pleasures of the moment.

Raw Story: Right. You see this in many aspects of the President's daily actions.

Philip Zimbardo: Trump’s incessant Twitter use is illuminating. Trump’s previous manifestation of sexual addiction pales in comparison to his recent Twitter use.

Totally incoherent as if he were publicly revealing he’s mentally anomalous. Many of these tweets reflect his egocentric megalomania and extreme grandiosity—a stable genius, and even more so aggrandizing the person overachieving anything he wants to but no other American politician in all history has ever been able to do, and he deserves the Nobel Peace Prize.

Raw Story: And no one appears to be able to stop him.

Philip Zimbardo: He can’t listen to his advisors’ recommendations to tweet less to reduce the embarrassment many of them create, and Trump is tweeting more perhaps in response to his anxiety over the special counsel’s report as well as the turmoil created by all his illegal activities coming to the surface.

Trump makes important national and international decisions without ever thinking about the future consequences. He becomes addicted to any activity that’s novel and moderately accessible, notably Trump Twitter mania. It is another of his mindless addictions. Everything he has done publicly since becoming president of the United States is part of his addiction.

Raw Story: Why is present hedonism dangerous when it presents in someone in a position of power?

Philip Zimbardo: Present hedonism isn’t all bad. Enjoying positive experiences in the present is an important part of living a well-balanced life. But an extreme present hedonist, enslaved to the present, unable to evaluate the past or consider future consequences, is a danger to themselves and others.

When extreme present hedonism knows little or no restraint, the potential hazards multiply exponentially. As CEO of his personal corporations, being an unconstrained extreme present hedonist apparently did not hinder Trump much. But as president of the United States, this lack of self-control is extremely dangerous for the citizens he has pledged to protect.

Extreme present hedonists have fragile egos, which can cause them to do or say whatever it takes -- including spouting ridiculously boastful or denigrating statements -- to protect himself from negatively perceived activities.

Paranoia is also the norm for extreme present hedonists (one need only read a few passages from Trump’s books, The Art of the Deal or Think Big: Make It Happen in Business and Life, to gain insight into his paranoia).

Attempts to feel superior can lead to the dehumanizing of others. This lack of forethought and compassion foments bullying – behavior that Trump has abundantly displayed; i.e, the mortifying ways in which he fired Secretary of State Rex Tillerson and FBI Deputy Director Andrew McCabe. Such actions are cruel displays of Trump’s need to dominate everyone within his social radar.

Raw Story: What are the ramifications for the nation?

Philip Zimbardo: Nationwide, it stokes the targeting of “others” through racism, misogyny, homophobia, nationalism, as well as the mocking of people with disabilities.

Trump has expressed his disdain for most, if not all, of these “others.” We need only mention “the wall,” “s*thole countries,” “animals, not people,” and “When you’re a star, they let you do it,” as prime examples.

How does Trump’s extreme present hedonism, dehumanization, and bullying affect the rest of us? Articles have noted a “Trump Effect.” Soon after his presidency began, gun deaths went up 12 percent (reported by the Washington Post); Trump-Inspired bullying incidents occurred in multiple schools (reported by BuzzFeed); post-election spike in hate crimes continued (reported by PBS Newshour); and white supremacist murders more than doubled (reported by the Anti-Defamation League). Therapists are dealing with the effects on a daily basis and are dubbing it “Trump Anxiety Disorder.”

Yet this is only the tip of the iceberg: normalization of Trump’s inappropriate behavior presents the possibility of a culture of violence for decades to come, not to mention the immediate dangers as his condition worsens. When children mimic the negative behavior of the POTUS, or worse, learn from their parents that dehumanization and bullying are okay, we’re all in big trouble.

At 5 a.m. on any given morning, our extreme present hedonist POTUS may carelessly fire off a series of tweets meant to appease his “base,” or perhaps signal “insiders” to proceed with a plan, or heap praise on himself. But as scandals and crisis mount, and public support diminishes, he may one day reach for the nuclear codes rather than his phone. With an extreme present hedonist, it’s entirely unpredictable.