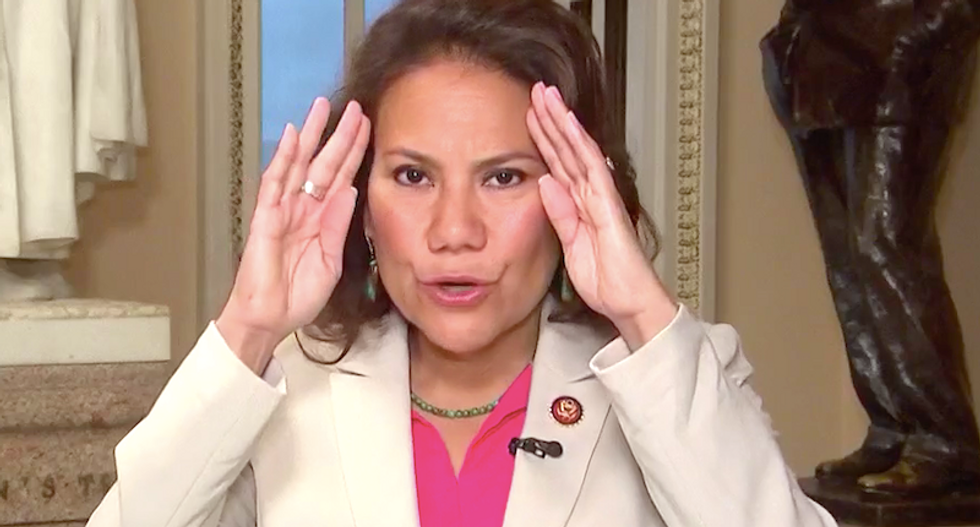 Rep. Veronica Escobar (D-TX) suggested President Donald Trump was deliberately creating a crisis at the border to help feed his "addiction to hate."

The Texas Democrat appeared Thursday on MSNBC's "Morning Joe," where she shamed the president for joking along with supporters at a Florida rally about shooting asylum seekers as they crossed the border.

"It made me very, very sad, very sad for our country," Escobar said, "that we are at such a moral rock bottom and that we have a president who has created an addiction to hate, an addiction to bigotry and he uses every opportunity he can to feed and grow that addiction. We are in so many crises, we are juggling as Americans so many crises. This morals crisis is very painful to watch unfold."

Escobar, whose district covers the border near El Paso, ripped the Trump administration's "total incompetence" at managing immigration and border issues, and she wondered if there might be a sinister purpose to that bungling.

"Their decision to move Customs (and) Border Protection agents from our ports has created a semi-shutdown at our border, at our ports of entry on the economic side, on the trade side," she said. "That's one example when you're thinking, is there any common sense here? Why wasn't there any strategy or planning for this?"

Escobar said she and others who live near the U.S.-Mexico border have been warning for months that more migrants would arrive as the weather warmed in spring, and she said the administration was completely unprepared to handle the situation.

"You take a look at the judicial side, you have a Department of Justice that still has an iron grip on its judges and a president that has stalled funds for new judges and for the ancillary personnel that they need," she said.

The lawmaker said she didn't trust the administration to do the right thing, and wondered darkly if they were purposefully doing the wrong thing.

"It's hard not to be cynical about this," Escobar said, "and think that no matter how many resources we appropriate, we have an administration that wants to exacerbate a challenge so he can laugh when people say 'shoot them.'"