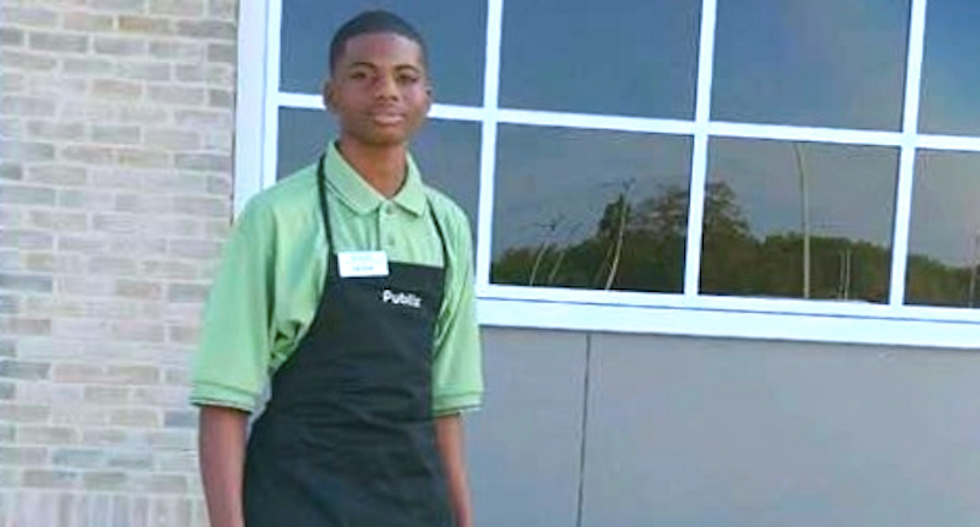 A black Florida father says police "traumatized" his teenage son by roughing him up and accusing him of carrying drugs during a jaywalking stop.

Chico Powell explained in a Facebook post that his 16-year-old son was walking home late Monday from work at a Publix grocery in Clearwater when he crossed a road outside the crosswalk, and an officer turned on his lights and chirped the siren to get the boy's attention, reported the Tampa Bay Times.

The teenager, who was wearing a hoodie over his green work apron, took an earbud out and asked the officer what he wanted, and Officer Joshua Gibson said he should use the crosswalk.

The teen agreed, and the officer asked if he was trying to get away or if he was carrying anything he shouldn't have.

Gibson told the teen to approach his cruiser, but the boy backed away -- and then the officer grabbed him.

The teen "braced, tensed and pulled away," Gibson wrote in his report, "in an attempt to defeat my grasp."

The officer pushed the boy against his cruiser, called for backup and placed the teenager in handcuffs.

Gibson again asked why the boy was trying to get away and whether he was carrying anything illegal, and the teen said no and consented to a search.

The officer found nothing illegal, and then told the teenager that disobeying law enforcement could be considered resisting arrest without violence -- and that's when the boy started crying.

He told the officer he understood and apologized several times, according to Gibson's report, and he asked the officer to call his mother and explain what happened.

Gibson ultimately did not cite or arrest the boy because he was cooperative, and he gave him a verbal warning.

Powell, the boy's father, said the situation should never have escalated beyond the initial warning about jaywalking.

“No matter how good we try to live our lives y’all only gone see us as one thing,” Powell said. “But guess what, y’all gotta another thing coming (because) he got a dad that cares and we’ll see y’all in court.”

The video was shared thousands of times on Facebook, which is where Clearwater police chief Dan Slaughter first learned of the incident.

He said police had spoken to Powell and opened an investigation.

“I think people know this department well enough that we wouldn't tolerate making stops based on race," Slaughter said. "But we're going to look into the circumstances.”