China still plans to send negotiators to US despite Trump tariffs 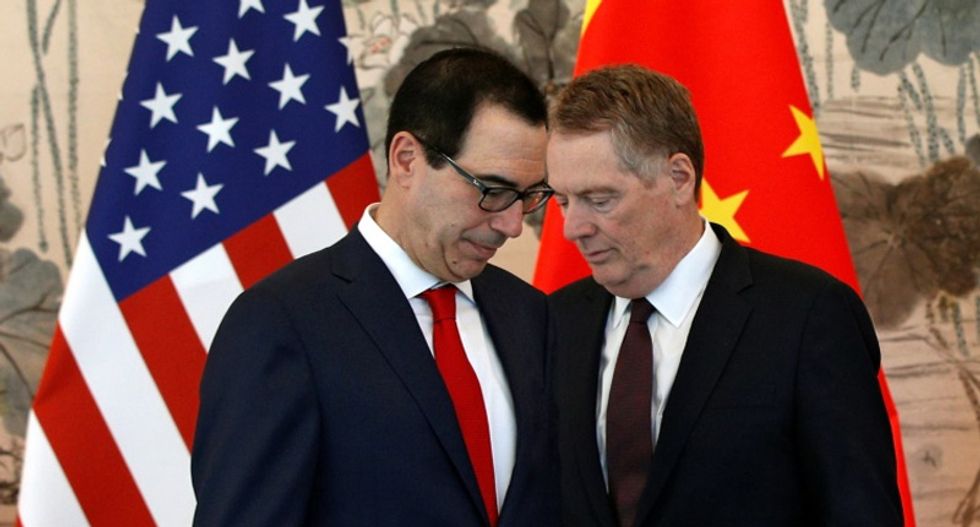 US Treasury Secretary Steven Mnuchin (L) and his Trade Representative Robert Lighthizer arrive for a group photo session after their meeting with Chinese Vice Premier Liu He in Beijing on May 1. (POOL/AFP /Andy Wong)

China said Monday it still plans to send negotiators to the United States for trade talks even after President Donald Trump vowed to raise tariffs later this week, a threat that sent stock markets into a tailspin.

Trump upped the ante as negotiators prepared to meet in Washington on Wednesday for what has been billed as a last-ditch round of negotiations to reach a deal or revive the trade war.

"The Trade Deal with China continues, but too slowly, as they attempt to renegotiate. No!" Trump wrote on Twitter on Sunday.

He picked up the issue again on Monday, tweeting: "With China we lose 500 Billion Dollars. Sorry, we're not going to be doing that anymore!"

Trump also renewed a threat to impose tariffs on all Chinese imports to the US -- worth $539.5 billion last year.

Despite Trump's tweetstorm, Chinese foreign ministry spokesman Geng Shuang said a Chinese team was "currently preparing to go to the US for negotiations" -- but he did not say when or whether top negotiator Liu He would lead the delegation.

Geng said "positive progress" has been made in 10 rounds of high-level negotiations and that the whole world was watching.

"We still hope that the US can work together with China, walk shoulder to shoulder and strive for a mutually beneficial win-win agreement on the basis of mutual respect," he said at a regular press briefing.

The Wall Street Journal had earlier reported that China was considering cancelling the talks.

"China shouldn't negotiate with a gun pointed to its head," the newspaper quoted a person briefed on the matter as saying, using a line Beijing has repeatedly said in the past.

Chinese shares sank following the tweets, with Shanghai stocks tumbling by more than five percent, their worst day in more than three years.

The two sides have imposed tariffs on $360 billion in two-way trade since last year. But Trump and Chinese leader Xi Jinping agreed to a truce in December to refrain from further escalation.

The US side visited Beijing last week for talks that Treasury Secretary Steven Mnuchin described as "productive".

"We are currently working on understanding the situation," Geng added on Monday.

If China's trade team still goes, said Zhang, "the focus will not only be on the trade deal but also on getting an explanation from the US".

Trump and Xi were expected to hold a summit to seal any deal.

Trump says he wants to reduce the huge US trade deficit with China, which in 2018 totalled $378.73 billion with services trade included.

Besides a greater opening of the Chinese market to US goods, Trump is pressing for structural changes such as Beijing ending its alleged practice of forcing US companies to share their technology for market access.

The US president has insisted that he will not accept a watered-down trade accord, and his administration warned recently that talks could not go on forever.

For now, the White House insists that the trade war has left the US economy unscathed, unlike the Chinese economy, which last year posted its slowest growth in nearly 20 years.

Trump asserted that so far the tariffs he imposed on Chinese goods "are partially responsible" for the robust US economy, which in the first quarter grew at an annual rate of 3.2 percent.

But many economists are worried about the longer term effects.

So far, the Chinese side in the talks has agreed for China to buy more US products, mainly in the farm and energy sectors.

But one major obstacle to reaching a final deal continues to be a mechanism for enforcing any accord that is agreed upon.

The Trump administration says it has seen promises and commitments ignored in the past, so this time it will not sign a deal unless it features measures that will allow Washington to verify that China is keeping its word.