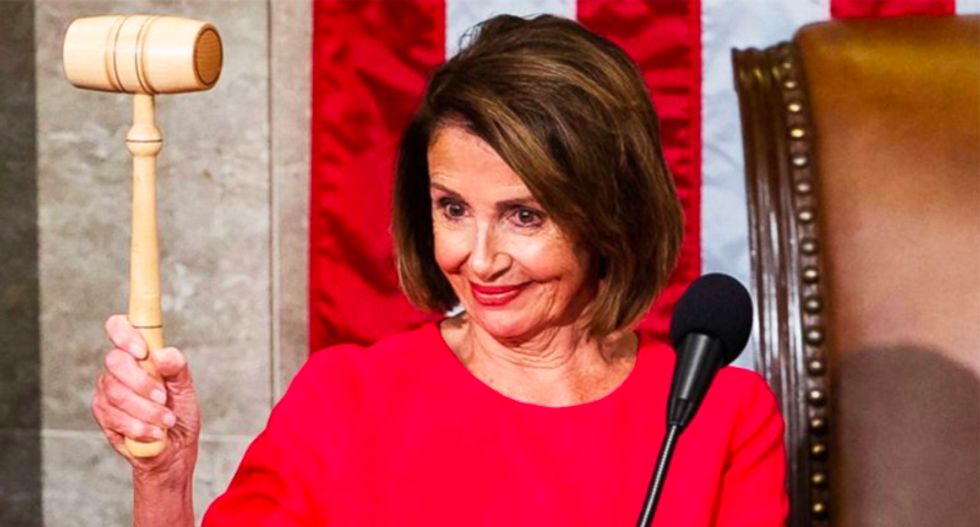 In a column for the Daily Beast, longtime political analyst Michael Tomasky said senior Democrats may be right that impeachment hearings would be fruitless with a Republican-held Senate unlikely to proceed against Donald Trump -- but suggested there are other hearings that could be used to boot the president from the Oval Office.

As the columnist projects, "So they open impeachment hearings, and… the Trump White House puts up the same stone wall it has already erected with regard to answering subpoenas and so on. So no documents are procured, and no one shows up to testify. Judiciary Committee Republicans boycott the whole thing."

With impeachment hearings that might go nowhere off the table -- to say nothing of Trump using them to saying the Democrats are attempting to stage a "coup" to rally his rabid base -- Tomasky suggested a three-prong approach that could force Trump out via the ballot box in 2020.

"First, they absolutely have to get Robert Mueller up there as soon as possible. It seems that Bill Barr is somehow delaying his departure from Justice Department employment, and that Mueller is being passive about this. They really need to work Mueller to get him to close down his office and leave the department and get up there," he wrote.

More importantly, he suggested, make it a bipartisan affair.

"If they can’t get any witnesses from the administration to come before them, produce expert witnesses of their own," Tomasky advised. "Get a parade of legal and constitutional scholars up there."

"Around 800 former federal prosecutors signed a letter earlier this month stating that Trump did obstruct justice. Some of them are Republicans. Get them up there, if they’ll do it," he continued. "Have other legal and political experts testify defending the Russia probe and describing the various ways in which Trump has subverted the Constitution. The Republicans on the committee will call their witnesses too. Fine. Let the country judge."

Lastly, he recommended ramping up the rhetoric if Democrats want to take on the bombastic president.

"They need common talking points that emphasize that Trump has obstructed justice and is subverting the Constitution right now in refusing to answer subpoenas. Nancy Pelosi shouldn’t pooh-pooh impeachment. I happen to agree with her politically under present conditions, but even so, she is the leader of the House Democrats. She (and others) shouldn’t say things that depress the base," he wrote, before concluding Democrats should not hope for help from the courts anytime soon.

"At some point, the Democrats are going to need a court, ideally the Supreme Court, to say that Trump must honor their subpoenas. Then they get to question Don McGahn and others, and it’s a new ball game," he wrote. "Until then, there are going to be a lot of frustrating weeks. But Democrats have a big power: the power of the gavel. They need to use it."