Lindsey Graham is rolling over for Trump's new tariffs because he's running scared of president as he seeks re-election: columnist 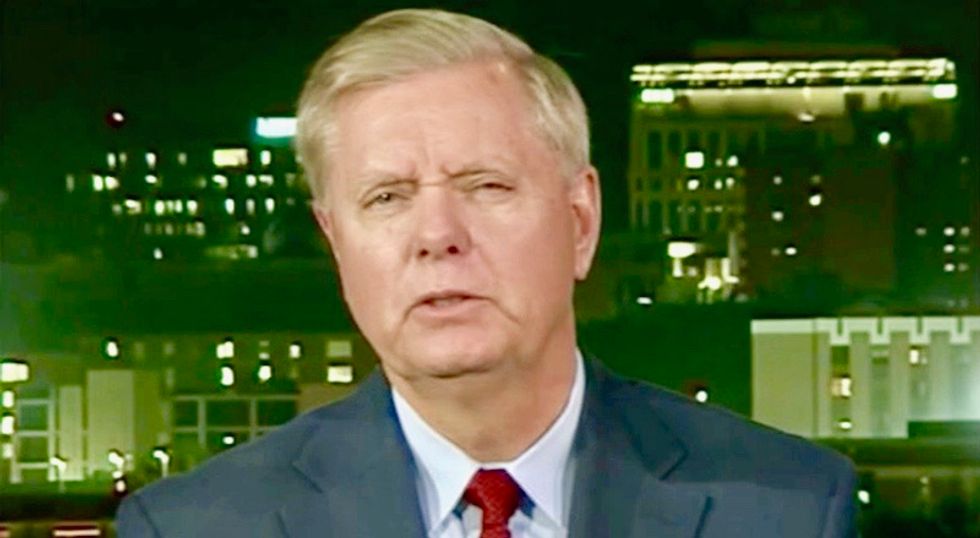 In a column castigating Congressional Republicans for standing idly by while President Donald Trump institutes tariff after tariff on America's trading partners in a fit of pique, Sen. Lindsey Graham (R-SC) is singled out as a specific target of derision.

According to the Washington Post's Amber Phillips, the GOP is "waving the white flag" and has no interest in challenging Trump as he wrecks the economy.

"President Trump is planning to levy tariffs on all Mexican goods because migrants keep crossing the Mexican border into the United States. Economists, trade experts and diplomats think that is a bad idea. Many Republican members of Congress seem to agree," she writes, adding that Senate Finance Chairman Charles Grassley (R-IA) has been an outlier as he harshly condemned the move.

As for the other Republicans, nothing but mild complaints.

"But once again, Republican members of Congress aren’t planning to do anything to stop the president of their own party from acting in a manner antithetical to their economic principles," she writes. "A GOP Senate aide close to trade negotiations said senators need to see how White House negotiations with Mexico play out before deciding on a course of action."

According to the columnist, two of the biggest culprits are high profile Republican leaders who are holding their fire -- and in the case of Graham, have supported the president's move.

Noting Graham's previous opposition to tariffs on Mexico -- based upon his own tweets -- Phillips said the South Carolina Senator and Senate Majority Leader Mitch McConnell (R-KY) are running scared of Trump.

"If you’re a Republican senator up for reelection in 2020, such as Sen. Lindsey O. Graham (R-S.C.) or McConnell, and had a viable challenger next year — safely embedding yourself under Trump’s umbrella — even if you contradict something you said a couple years ago — is the key to survival," she writes, adding, "Among GOP members of Congress, there is no talk of weighing in on a resolution of disapproval, as they did for Trump’s national emergency declaration at the border. It would be symbolic but would register for the history books that the Republican Party under Trump is not entirely a pro-tariff party."