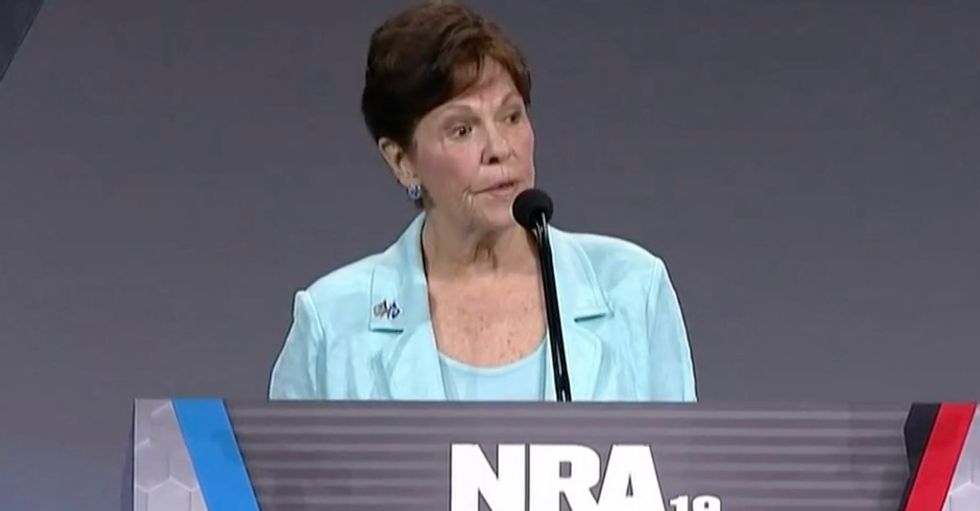 The NRA's public controversies are not going away.

Just a week after now-former National Rifle Association president Oliver North lost his job and the gun lobby group's CEO, Wayne LaPierre charged him with extortion, the new president is under fire for apparently racist and sexist remarks surrounding a U.S. Congresswoman.

New NRA president Carolyn Meadows promised voters the GOP will "get that seat back," referring to the U.S. House of Representatives seat won in November by Georgia Democrat Lucy McBath, who unseated highly-controversial Republican Rep. Karen Handel at the ballot box.

Meadows' grasp of the race seemed to differ with the facts – and have a lot to do with race.

McBath ran on a platform of opposing gun violence, but that's not the reason she won, Meadows claimed

Meadows says McBath won because she's a woman and Black.

“There will be more than one person in the race, but we'll get that seat back,” Meadows the Marietta Daily Journal, as Media Matters reports. “But it is wrong to say like McBath said, that the reason she won was because of her anti-gun stance. That didn't have anything to do with it — it had to do with being a minority female," Meadows claimed.

She went on to insist that in deep red Georgia, "the Democrats really turned out, and that's the problem we have with conservatives — we don't turn out as well.”

Media Matters notes that Meadows is also "the leader of an organization, the Stone Mountain Memorial Association (SMMA), that blocked a 2015 proposal to construct a monument to Dr. Martin Luther King Jr. on Stone Mountain, GA."

The Stone Mountain Memorial Association is America’s largest Confederate memorial. It features "figures of General Lee, General Thomas 'Stonewall' Jackson and President of the Confederacy Jefferson Davis larger than the presidential visages of Mount Rushmore," according to Smithsonian Magazine.

@JoeMyGod Sure being a minority female is such a huge advantage in everything, especially big elections
— Brad Shaw *BLM* (@Brad Shaw *BLM*)1557158220.0