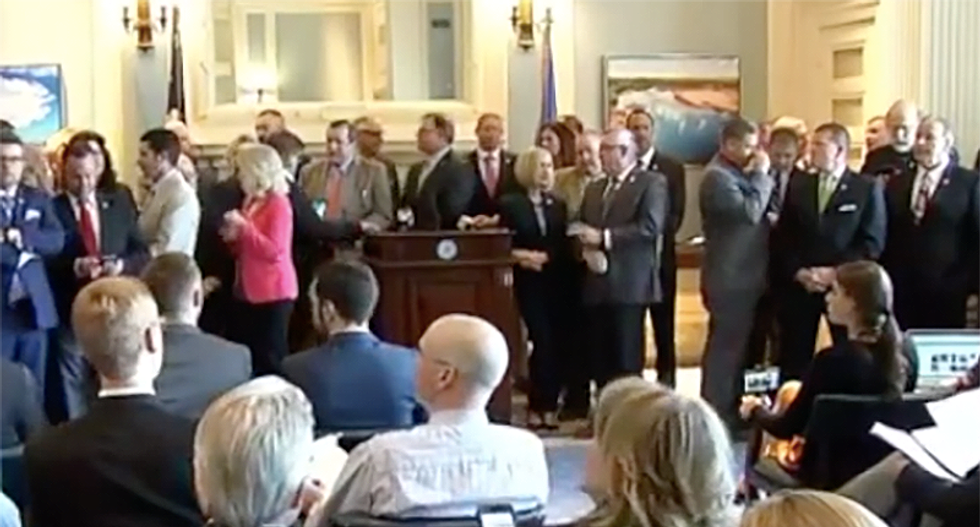 Monday afternoon as Oklahoma Gov. Kevin Stitt (R-OK) was about to give remarks about the 2020 budget. Republican legislators were milling about discussing the recent sexual assault scandal at the state Capitol without thinking about the microphone that sat on the podium.

A tea party activist and blogger outed two Republican legislators last week for alleged involvement in sexual battery of a female while several other male members of the House of Representatives were at an Oklahoma City restaurant, KFOR reported.

Reps. Mark McBride and Scott Fetgatter can be heard on the hot mic from Monday joking about the ordeal.

"So you molested this girl or Kannady did?" McBride said, according to one Oklahoma official.

"I was at the table and allowed it to happen," replied Fetgatter.

"You allowed it to happen?" McBride said.

"That's a good question," Fetgatter replied before muttering something unintelligible.

"You sure it wasn't a donkey or a goat or something," McBride joked.

"If I'm honest with you, I don't even recall it, so," Fetgatter is heard saying. "I don't recall a video or anything..."

Fetgatter went on to say that the first week he was "anonymous" but week two of the story he's being accused of being "responsible."

The governor then is seen entering the room for the press conference.