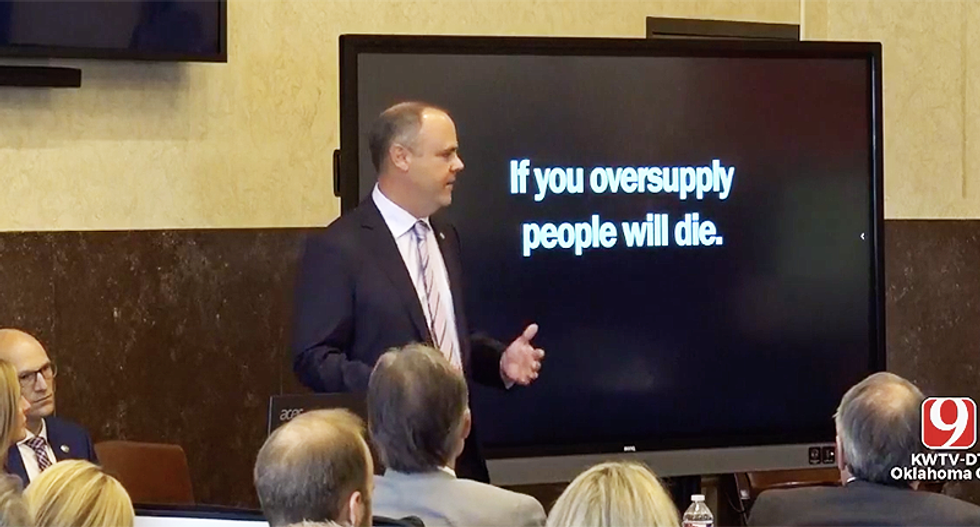 Pharma giant intends to shame addicts in first opioid trial, if their opening statements are any indication.

Tuesday began the first public opioid trial in the country, as the state of Oklahoma went after Johnson & Johnson for the epidemic residents face. While the Oklahoma lawyers used up nearly two hours to explain their case, Johnson & Johnson used a video they did to show the personal responsibility of children who take prescription drugs recreationally.

The narrative J&J is pushing harkens back to an era of labeling drug addicts as bad people who clearly did something bad and now must face the consequences. However, what the Oklahoma attorneys addressed is quite the opposite. In the opening statement, the state compared J&J to Purdue Pharma, the creator of oxycontin/oxycodone, and using an aggressive marketing strategy to encourage doctors, surgeons, nurses and more medical professionals to use opioids, claiming they're safe.

J&J attorneys explained that they don't market opioids to children or any minors. They're right, what they did was encourage doctors to prescribe opioids to young people as part of a campaign around Spring Break. "For sprains and strains," opioids could be given to youth, J&J argued.

The state introduced five families who would testify about dealing with an addict of opioids. But when Johnson & Johnson had an opportunity to give their opening statement they attacked one of the families who lost a child by saying that the boy was smoking marijuana long before he died from opioids.

"Starting this epidemic was easy. Fixing it is going to be hard," said attorney Reggie Whitten, for the state of Oklahoma. "There's nothing you can do about the past... only this court has the power to look forward and fix this. In this court, we become level -- its a level playing field. They have all the money and all the power. But Oklahoma has this court."

Whitten, who lost his own son to opioid abuse, noted that shaming addicts is part of the opioid crisis.

"It's different from cancer or diabetes," Whitten said in the opening statement. "Can you imagine society telling people 'you need more willpower' not insulin? Their loved ones got sick with a manmade disease."

In some arguments, big pharma suggests that like cigarettes, no one ever forced people to use opioids. But the argument flies in the face of doctors being the trusted advisors, who pharmaceutical companies lobbied to prescribe opioids. The state said that they intend to show evidence that Johnson & Johnson lied to doctors about whether the drugs were habit forming.

Watch the opening statements below and the streaming video of the trial:

Ricardo Lopez, Minnesota Reformer
A GOP state senator on Friday asked his Facebook followers to donate to the legal defense fund of a family facing felony charges in connection with the Jan. 6 attack on the U.S. Capitol.

“Here's a local family in Lindstrom who can use some help," Koran wrote. “They attended the Jan 6th Rally and have been accused and charged with a variety of crimes. Some very serious and some which seem to be just to punish opposing views."