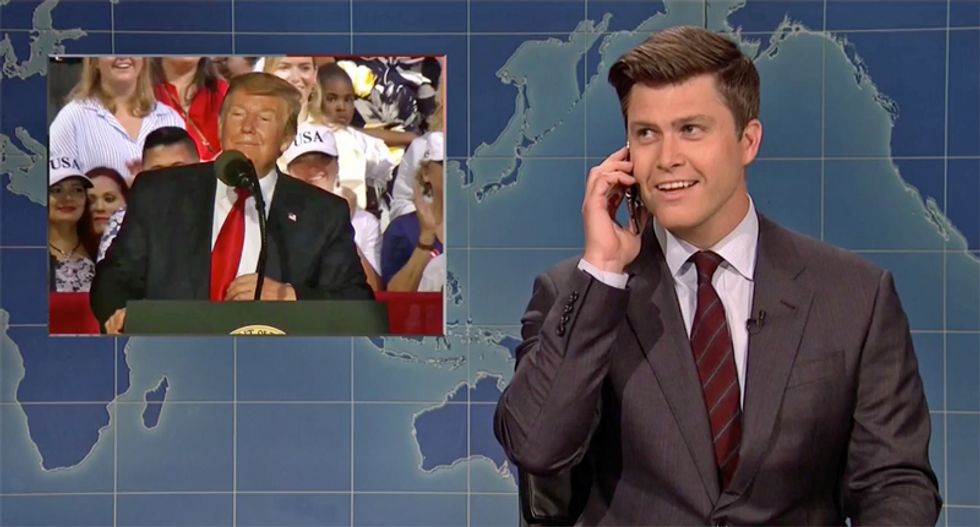 They then turned their sights on the commander-in-chief during the "Weekend Update" segment with Colin Jost and Michael Che.

"Well guys, it turns out that Donald Trump may not be the financial genius that no one ever really thought he was," Jost said. "According to tax documents from 1985 to 1994, Trump appears to have lost, 'more money than any other American taxpayer.'"

"Now, I love that during that period when he was losing a billion dollars he had the audacity to write a book about how great he was at business," he noted.

Trump was credited as a co-author with Tony Schwartz of the bestselling 1987 book Trump: The Art of the Deal.

"It's like if right now R. Kelly wrote a book on babysitting," Jost said.

He also ripped on Fox News for the coverage of Trump that has resulted in many media analysts likening the network to state television.

"But somehow there are still Trump supporters who are trying to spin this into a good thing," Jost noted.

He then played a clip from "Fox and Friends."

"If anything, you read this and you're like, 'wow, it's pretty impressive all the things that he's done in his life.' It's beyond what most of us could ever achieve," a Fox News personality said.

"Come on, blonde lady, even you don't believe that. I mean, you said the last part into your hand," he pointed out.

"President Trump held a rally in the Florida Panhandle this week and it was exactly what you're imagining," he said.

He played multiple bizarre clips from the rally, including one of Trump saying, "so always keep your eyes open, be careful and let law enforcement know when you see a kook."

Jost was then seen on his phone.

"I know that speech didn't sound very eloquent, but for the Florida Panhandle it was basically the Gettysburg address," he added.