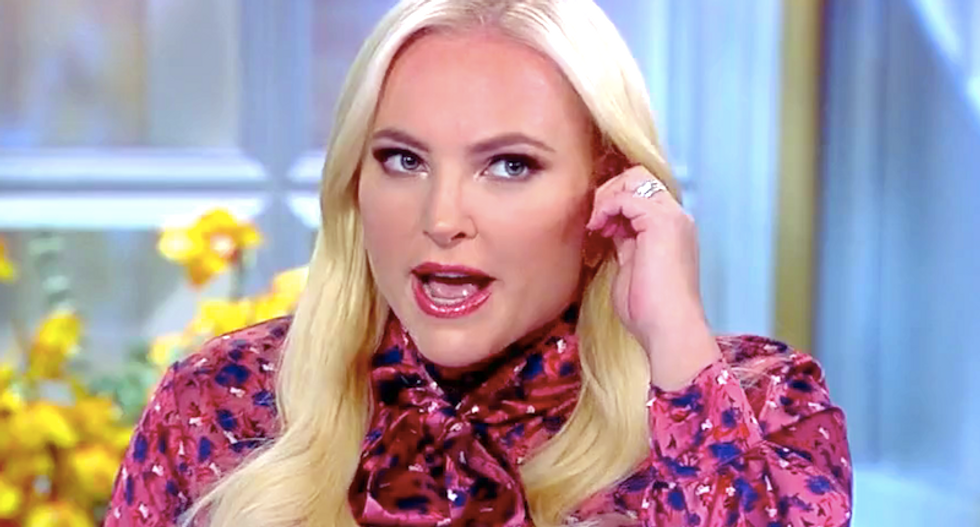 Producers from "The View" questioned co-host Meghan McCain's recent sick days -- which they suspect were timed to avoid talking about her father-in-law falling under an ethics investigation for his work in the Trump administration.

McCain took off two days from the ABC daytime talk show for an unspecified illness, and producers think she was faking sick after father-in-law Doug Domenech was named in an ethics complaint against six Interior Department officials, reported The Daily Mail.

"She took off to avoid having to talk about her husband's dad, and everyone knew it," one producer told the tabloid.

The elder Domenech allegedly continued interacting with the conservative think tank Fueling Freedom Project at the Texas Public Policy Foundation, where he had worked before President Donald Trump appointed him as assistant secretary for Insular and International Affairs at the Cabinet-level agency.

Behind-the-scenes sources from "The View" told The Daily Mail that McCain was embarrassed by reporting on the complaint, especially since her name was frequently listed in headlines about the matter.

"She comes on the show daily and says she hates Donald Trump, and has benefited from the president's attack on her late father," one source said. "So for it to be revealed that her father-in-law not only works for the president, but is now under an ethics investigation, she was humiliated and conveniently sick for two days."

She returned to the show in time to interview newly announced Democratic presidential candidate Joe Biden, a close friend of her late father, Sen. John McCain.

"View" sources pointed out that the 34-year-old McCain rarely discusses her husband, Ben Domenech, on the show, although the other co-hosts openly discuss their spouses and relationships.

Domenech is the co-founder and publisher of the right-wing website The Federalist, which infamously has not revealed the source of its funding.

"She always says that she likes to keep her private life private," a source said, "but if you notice she never has any issues talking about her late father, her mother Cindy McCain or her 107-year-old grandmother Roberta."

The show source suggested that McCain seems embarrassed by the husband she married in November 2017.

"She doesn't like talking about her husband because he has a very checkered past," the source said.

Domenech was forced to resign from the Washington Post in 2006 over plagiarism claims, and he was forced to publicly apologize for describing Supreme Court Justice nominee Elena Kagan as the "first openly gay justice."

Two other publications removed some of Domenech's articles from their websites over revelations that he was paid $36,000 by conservative lobbyist Joshua Trevino to write propaganda pieces Malaysian government without disclosing the payments.

Show sources made no secret of their displeasure toward McCain.

"Let's face it, she's a hypocrite!" a source said. "She touts conservative values and principles, but I guess those principles apply to everyone except the person she decided to marry. How can you sit at that table and question the integrity of politicians and other newsworthy personalities who come on that show when your husband has a shamefully questionable past?"

"You best believe that the next time she decides to get disrespectful with Joy Behar during a heated exchange in hot topics, Joy will be ready to bring the topic up," the source said, "and everyone who watches the show knows that the best way to shut Meghan up, is to drop a bag of truth in her lap. She'll shut down and be quiet the rest of the show!"