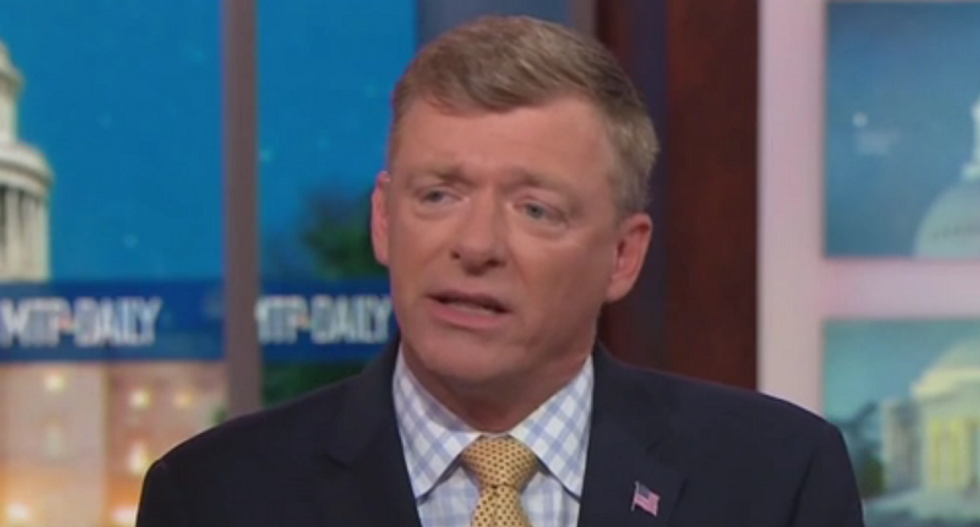 On Friday, MSNBC's Hallie Jackson questioned the Trump 2020 campaign's strategic communications director, Marc Lotter, about the president's lawyer Rudy Giuliani visiting Ukraine to ask their government to dig up dirt on a conspiracy theory about Joe Biden. Lotter distanced the campaign from Giuliani's trip — but pointedly did not say the campaign would reject information that Giuliani gleaned from the trip.

"Do you disavow what Rudy Giuliani is doing?" asked Jackson.

"I can tell you Rudy Giuliani is not doing this on behalf of the campaign," said Lotter. "He's doing it in his capacity as a private citizen."

"Sounds like you're distancing yourself from him," said Jackson. "Has anybody from the campaign, you, anybody, reached out to Rudy Giuliani and told him to knock it off?"

"It's not my role to talk to what a private citizen is doing in this case," said Lotter. "So, again, he's not doing it on behalf of the campaign ... I think one of the things we have to ask ourselves is — the underlying issue at hand is that, was there any kind of undue influence or was there any kind of inappropriate activities that were conducted either in relation to the start of the investigation or in as it related to the Bidens."

"But pull back, because the bigger issue here is a campaign, whether you want to or not, having somebody seek information from a foreign government that could hurt the campaign opponent," said Jackson. "Do you believe this is a slippery slope?"

"I believe if you're going to have somebody running for President of the United States, if there is the possibility that something inappropriate happened, then it needs to be investigated," said Lotter.

"Well, that's not the answer to my question," Jackson pressed him. "Do you think what Rudy Giuliani is setting a bad precedent?"

"I'm not going to get into what a private citizen does," Lotter repeated.

"You should," Jackson insisted. "He's talking about the guy you're working for."

"He's also acting in his capacity as a private citizen, not on behalf of our campaign," said Lotter. "Go back to 2016. Hillary Clinton and the DNC was hiring third parties to go out and work with foreign operatives."

"I see what you're doing here, but are you equating — I guess my question is how do you put this on the same level as what happened in 2016? Does this not strike you as different?" Jackson said. "A guest on the show earlier made the point that you have a former campaign manager, Paul Manafort, sitting in prison."

"Not for anything that was—" Lotter began to say.

"Not for anything related to the campaign yet, with this question of foreign interference in the election," said Jackson. "Can you sit here and say that the Trump campaign will not use whatever Giuliani comes back from Ukraine with? Will you commit to that?"

"We don't know what he's going to find," Lotter said.