Trump has no foreign policy 'other than a preference for appeasing dictators': CNN's Anderson Cooper 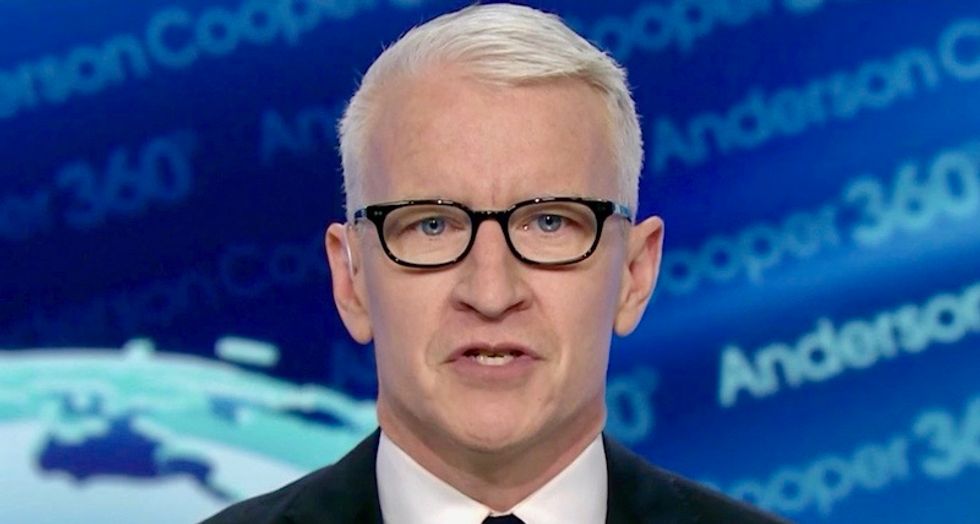 On Tuesday, CNN's Anderson Cooper laid into President Donald Trump for his ongoing friendliness with North Korea and his unwillingness to listen to his national security advisers — not even John Bolton, who is enraged that Trump doesn't share his hawkish stance.

"The president went on to rhapsodize about all the great beachfront property there is in North Korea, and spoke of Kim Jong-un as if he was another real estate tycoon, not a bloodthirsty dictator," said Cooper. "A view Bolton clearly does not share. Never has, and the two differ on Iran, as well, with the president talking tough in public, but counseling restraint behind closed doors."

This, Cooper noted, "is certainly his prerogative as chief executive. It should also be said that presidents often see things differently from their national security advisers, sometimes even hiring them to play devil's advocate. That said, the president has now hired three of them. He's seen Secretaries of State, Defense, and U.N. Ambassadors come and go."

"He's changed course so many times on so many issues, whether it's North Korea, Iran, pulling out of Syria, threatening to leave NATO, that perhaps it's not really possible to say that he and ambassador Bolton are truly at odds on foreign policy, because he so far has no real consistent foreign policy to be at odds with, other than a preference for appeasing dictators," Cooper added. "That's a question, at least. The other, of course, is what exactly did the president think he was getting in John Bolton, who's been nothing if not consistent, and consistently hawkish over the years."

White supremacists have hidden under their white hoods for decades. Now, that mostly anonymous group is coming out from hiding to practice their far-right beliefs publicly, wrote columnist Wajahat Ali in the Daily Beast.

Last week, they were even recognized by Fox News host Tucker Carlson, who eagerly prompted the racist "great replacement" theory that immigrants somehow nullify the existence of white people. As Casey Michael pointed out, the theory "has propelled fascistic massacres from New Zealand to San Diego to El Paso, Texas."

Rep. Liz Cheney (R-WY) released a first quarter fundraising report showing she had raised $1.54 million, but although that is a substaintial war chest for Wyoming, it is apparently not enough to stop former President Donald Trump from attempting to oust her from office.

Trump has been angry with Cheney since she voted to impeach him for inciting the fatal January 6th insurrection at the U.S. Capitol. Cheney said Republicans had an obligation to "make clear that we aren't the party of white supremacy."

Arnett Thomas is a convicted murderer who had spent two decades in prison before being released in 2000. Now 71-years-old and living in government housing, the New Jersey resident is suing Donald Trump over the massive death toll from coronavirus, NewJersey.com reports.

"The former president literally became the very domestic enemy to the Constitution he swore to defend," Thomas wrote in his lawsuit that now includes more than 75 co-plaintiffs.