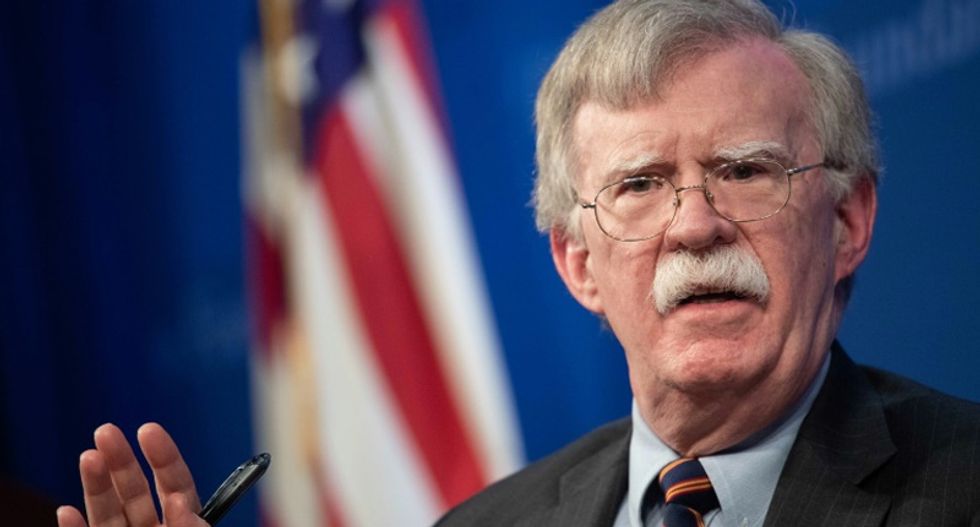 Does any of this sound familiar? A body of water called a “gulf” where a ship was “damaged” in an “attack,” and nobody can verify either the attack or the damage. A lying idiot in the White House itching to launch an attack on a regime he hates. A lying national security adviser whispering in the ear of the lying idiot that if we don’t “do something,” our “resolve” will be questioned and we will look “weak.”

Here we fucking go again. Gulf of Tonkin? Persian Gulf? The North Vietnamese? The Iranians? What is this, 1964?

All we need is a bunch of sold-out politicians in Washington D.C. willing to believe black is white, night is day, and up is down . . . ooops! Who’s that I see over there still talking about Hillary’s emails and Benghazi? Why, it’s any kowtowing Republican walking down one of those corridors in the basement of the Capitol where all the TV reporters shove microphones in their faces so they can blather unhinged nonsense supporting the lies of the man in the White House so he won’t Tweet at them tomorrow morning at 6 a.m., that’s who it is!

What’s that you say? The Iranians are attacking oil tankers in the Persian Gulf and re-starting their nuclear program? John Kerry should be arrested and prosecuted because he talked on the phone to somebody in Iran yesterday? The FBI is a radical leftist cult intent on launching a coup against the president of the United States? Overthrowing Saddam was a really, really good idea, and anybody who doesn’t believe it is a lily-livered peacenik?

How about this number: 120,000 is the number of troops in the “plan” drawn up by the Pentagon to show the Iranians we mean business. What are we going to do with these 120,000 troops? Why, we’re going to send them 6,000 miles away from our shores to the Middle East where they’re going to be ready for . . . something, anyway. We’ll get to that part of the “plan” later. Meanwhile, we’ll dispatch an aircraft carrier group and a passel of B-52’s and probably a whole mess of stealthy submarines, but we’re not supposed to know about the subs, because they’re, like, secret.

Isn’t that number just a teeny little bit familiar and just a tad unnerving? Doesn’t it remind you of the number of troops decided upon by those tactical geniuses Donald Rumsfeld, Paul Wolfowitz, and Douglas Feith, the so-called “architects” of the war in Iraq, because, uh, Saddam had WMD’s and a great big army, but all we needed was about 140,000 troops to go over there and wipe the floor with him and his Ba’athist thugs and be welcomed as “liberators” by the Iraqi people and then we would come home.

Let’s see, that was, uh, 16 years ago, and we still have about 5,200 troops in Iraq, which according to Foreign Policy magazine are facing demands from within the Iraqi parliament to withdraw from the country. We have another thousand or so in Syria, although nobody really knows how many because Trump keeps saying he’s going to withdraw them, but then he doesn’t, presumably because his ear has been tickled by his Chief War-Whisperer, John Bolton.

Sixteen years and something like $3 trillion dollars down the drain, and we’re still in Iraq? That was the war that was going to “pay for itself,” according to strategic genius Paul Wolfowitz, who oversaw the defenestration of the Chief of Staff of the Army, General Eric Shinseki, for having the temerity to disagree with him about troop levels and how much the war would cost in testimony before the Congress. Shinseki, by the way, was proven right. Wolfowitz was proven stupidly, tragically wrong. But who’s back on the op-ed pages, babbling his neo-con nonsense? Wolfowitz, of course, because Americans don’t have the memory of a goddamn gnat, that’s why.

Who the fuck are these people? Who were Wolfowitz and Feith, anyway? Who woke up one morning and appointed them as military experts? Feith was fond of giving interviews seated in a big armchair in his personal library of “over 8,000 volumes” of military history. Didn’t the fool bother to read any of them?

Who the hell is Bolton? Who put the hair up his ass so he wants to invade every Muslim country he can find on a map? Didn’t anybody teach that dull bastard to count? Maybe he should drop by Feith’s house and check out a few of his “over 8,000 volumes” of military history.

Maybe he’ll discover that Iraq’s population in 2003 was about 25 million, and Iran’s population today is more than twice that, over 81 million. Iraq’s military was on its ass in 2003 when we invaded the country. They retreated so fast, we were in Baghdad in three weeks. Iran’s military has been described as the most powerful in the Middle East other than Israel’s, by no less an expert than former commander of U.S. forces in Iraq General John Abizaid.

We’ve been bogged down in Iraq for 16 years. We spent 10 years in Vietnam spinning our wheels and ending more than 57,000 American lives and God only knows how many Vietnamese lives. How long do you figure we’d be in Iran? How many lives do you think it would cost us? What do you figure gas would cost at the pump about two days after we invaded a major oil-producing country like Iran and disrupted the global oil market?

Our military is spread all over the goddamned globe, and Bolton and Trump are sitting around the White House rattling their sabers at Iran? They’re using attacks on ships in the Persian Gulf to justify this madness? A week after Trump appointed Bolton as national security adviser, he pulled us out of the Iran nuclear agreement, and now they’re talking about the Iranian nuclear program when announcing plans to ship 120,000 troops to the Middle East to teach Iran a lesson, or show them who’s boss, or whose mustache is bigger and furrier, or some goddamn thing.

Haven’t we been down this road before? Haven’t we heard these lies and threats and more lies? Haven’t we heard about Pentagon plans and phony estimates and spurious promises? Last time it was Paul “Pay for Itself” Wolfowitz and Condoleezza “Mushroom Cloud” Rice and George “Mission Accomplished” Bush. This time it’s John “War Whisperer” Bolton and Donald “I’m Lying as Fast as I Can” Trump.

We know how this ends: with more dead bodies.