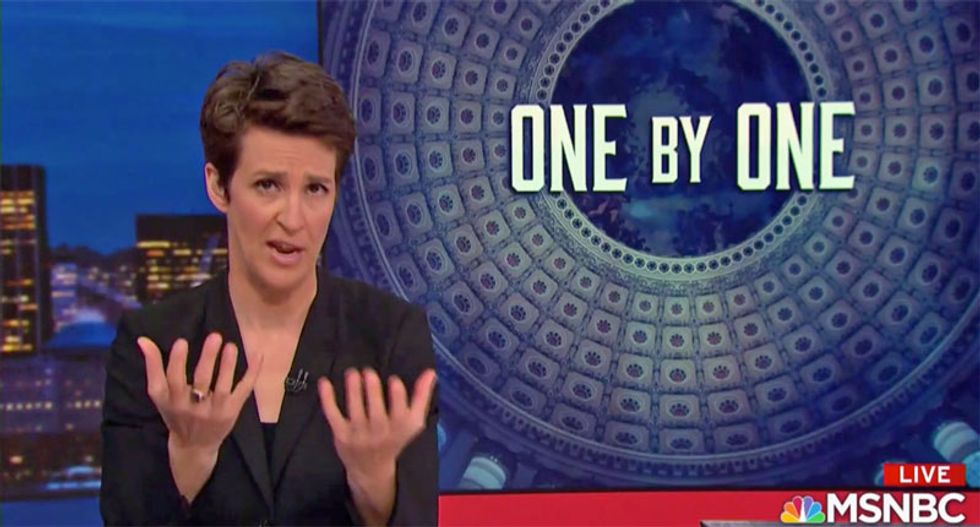 The movement to begin impeachment proceedings against President Donald Trump continues to grow in strength within the Democratic Party caucus in the House of Representatives, MSNBC's Rachel Maddow reported Thursday, next to a graphic reading "one by one."

Maddow noted how special counsel Robert Mueller hinted that impeachment is the appropriate vehicle to formally charge Trump with misconduct.

"I think that’s why over the last 36 hours or so you started to see this perceptible movement of Democrats toward opening an impeachment inquiry," Maddow reported.

"I mean, at this point, we're getting a new Democratic member of Congress coming out in favor of opening such an inquiry pretty much every few hours," she continued. "Last night two House committee chairman came out in support of an impeachment hearing for the first time."

"The Democratic presidential candidates are approaching unanimity on the issue now," Maddow reported.

"We’re seeing this trend of more and more people actually reading and digesting the content of Mueller’s report, now people are hearing the special counsel speak for the first time, hearing him make clear himself how serious the evidence and allegations in the report are," she explained. "As this stuff is starting to sink in, we are seeing people organically coming to the conclusion that impeachment proceedings are the logical next step and the necessary next step."

"There is a shift happening in the Democratic Party on this, one by one. Like I said, every few hours we are seeing a new member of Congress say, I was against it before but I’m for it now," she reported. "The only question, it seems to me is how big and how fast the shift is."

Her contention was proved a short time later when she interviewed Rep. Mike Quigley (D-IL).

"So, for whatever it's worth on your program I'm announcing that I notified the speaker's office today that I'm asking we open an inquiry," Quigley said.