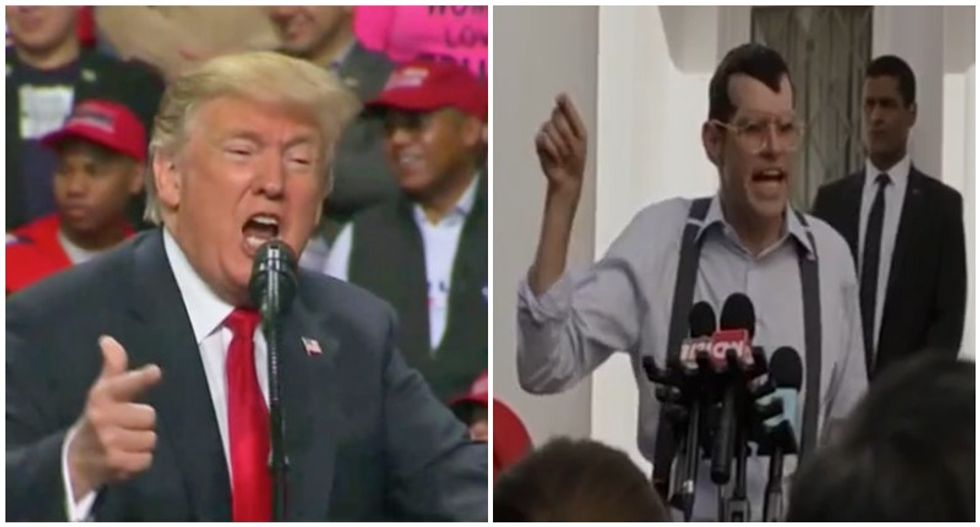 CNN on Thursday ran back-to-back video clips of a President Donald Trump rally in Florida and a speech delivered by Jonah Ryan, a fictional character from HBO's comedy series "Veep" who is mounting a 2020 presidential run -- and it showed that Trump's presidency has grown more ridiculous than satire.

In the first clip, Trump is seen laughing and joking when one of his supporters suggests shooting migrant families trying to claim asylum in the United States during his Wednesday night rally in Florida.

"Only in the panhandle can you get away with that statement!" Trump cracked.

In the second clip, Jonah is delivering an anti-immigrant speech to an angry crowd in which he blames immigrants for diseases coming into the United States. At one point, someone at the rally yells, "Kill them!" and Ryan replies, "Well, we don't have to kill all of them -- I mean, there are some good immigrants... Beyonce?"

After watching the clips, CNN host John Berman marveled at how quickly reality has caught up with satire, as this particular episode of "Veep" aired mere days ago.

"There is almost no discernible difference!" he said.