What mass shootings do to those not shot: Social consequences of mass gun violence

Mass shootings are a tragic new normal in American life. They happen too often, as evidenced by the May 7 shooting in Highlands Ranch, Colo. and the April 30 shooting in Charlotte, N.C., the April 27 shooting at a synagogue in San Diego on the last day of Passover. Schools, places of worship, movie theaters, workplaces, schools, bars and restaurants are no longer secure from gun violence. Families lose loved ones, and lives are ripped apart.

Often, and especially when a person who is not a minority or Muslim perpetrates a mass shooting, mental health is raised as a real concern – or, critics say, a diversion from the real issue of easy access to firearms.

Less is discussed, however, about the stress of such events on the rest of society. That includes those who survived the shooting; those who were in the vicinity, including the first responders; those who lost someone in the shooting; and those who hear about it via the media.

I am a trauma and anxiety researcher and clinician psychiatrist, and I know that the effects of such violence are far-reaching. While the immediate survivors are most affected, the rest of society suffers, too.

Like other animals, we humans get stressed or terrified via direct exposure to a dangerous event. The extent of that stress or fear can vary. For example, survivors may want to avoid the neighborhood where a shooting occurred or the context related to shooting, such as outdoor concerts if the shooting happened there. In the worst case, a person may develop post-traumatic stress disorder, or PTSD.

PTSD is a debilitating condition that develops after exposure to serious traumatic experiences such as war, natural disasters, rape, assault, robbery, car accidents and of course gun violence. Nearly 8 percent of the U.S. population deals with PTSD. Symptoms include high anxiety, avoiding reminders of the trauma, emotional numbness, hyper-vigilance, frequent intrusive memories of trauma, nightmares and flashbacks. The brain switches to fight-or-flight mode, or survival mode, and the person is always waiting for something terrible to happen.

When the trauma is man-made, the impact can be profound: The rate of PTSD in mass shootings may be as high as 36 percent among survivors. Depression, another debilitating psychiatric condition, occurs in as many as 80 percent of people with PTSD.

Survivors of shootings may also experience survivor’s guilt, the feeling that they failed others who died, did not do enough to help them survive or just because they survived. PTSD can improve by itself, but many need treatment. We have effective treatments available in the form of psychotherapy and medications. The more chronic it gets, the more negative the impact on the brain, and the harder to treat.

Children and adolescents are in a developmental stage of forming their worldview and how safe it is to live in this society. Exposure to such horrific experiences or related news, can fundamentally affect the way they perceive the world as a safe or unsafe place, and how much they can rely on the adults, and the society to protect them. They can carry such world view for the rest of their lives, and even transfer it to their children.“

The effect on those close by, or who arrive later

PTSD can develop not only through personal exposure to trauma, but also via exposure to others’ severe trauma. Humans are evolved to be very sensitive to social cues and have survived as a species particularly because of the ability to fear as a group. We therefore learn fear and experience terror via exposure to trauma and fear of others. Even seeing a black-and-white scared face on a computer will make our amygdala, the fear area of our brain, light up in brain imaging studies.

People in the vicinity of a mass shooting may see exposed, disfigured or burned dead bodies, injured people in agony, terror of others, extremely loud noises, chaos and terror of post-shooting, and the unknown. The unknown – a sense of lack of control over the situation – has a very important role in making people feel insecure, terrified and traumatized.

I, sadly, see this form of trauma often in asylum seekers exposed to torture of their loved ones, refugees exposed to casualties of war, combat veterans who lost their comrades and people who lost a loved one in car accidents, natural disasters or shootings. 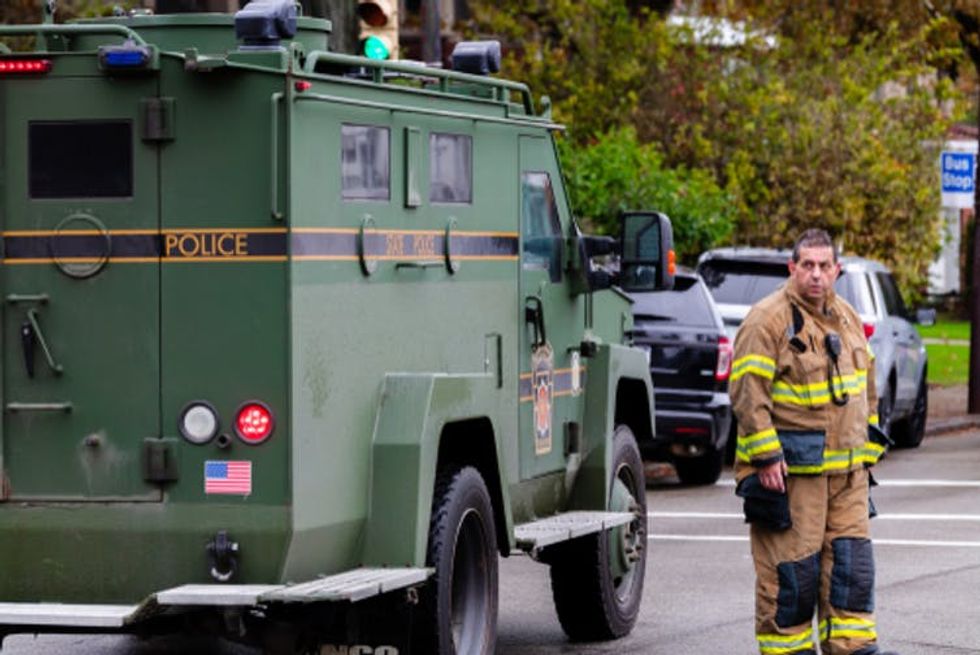 A first responder after the shooting at Tree of Life synagogue in Pittsburgh, Pennsylvania, Oct. 27, 2018.

Another group whose trauma is usually overlooked is the first responders. When we all run away, the police, the firefighters and the paramedics rush into the danger zone, and frequently face uncertainty, threats to themselves, their colleagues and others, as well as terrible bloody scenes of post-shooting. This exposure happens to them too frequently. PTSD has been reported in up to 20 percent of first responders to man-made mass violence.

How does it affect those who were not even near the shooting?

There is evidence of distress, anxiety or even PTSD symptoms among people who were not directly exposed to a disaster, but were exposed to the news, including post-9/11. Fear, the coming unknown (is there another shooting, are other co-conspirators involved?) and reduced faith in our perceived safety may all play a role in this.

Every time there is a mass shooting in a new place, we learn that kind of place is now on the not-very-safe list. When at the temple or church, the club or in the class, someone may walk in and open fire. People worry not only about themselves but also about the safety of their children and other loved ones.

Media: The good, the bad and the sometimes ugly 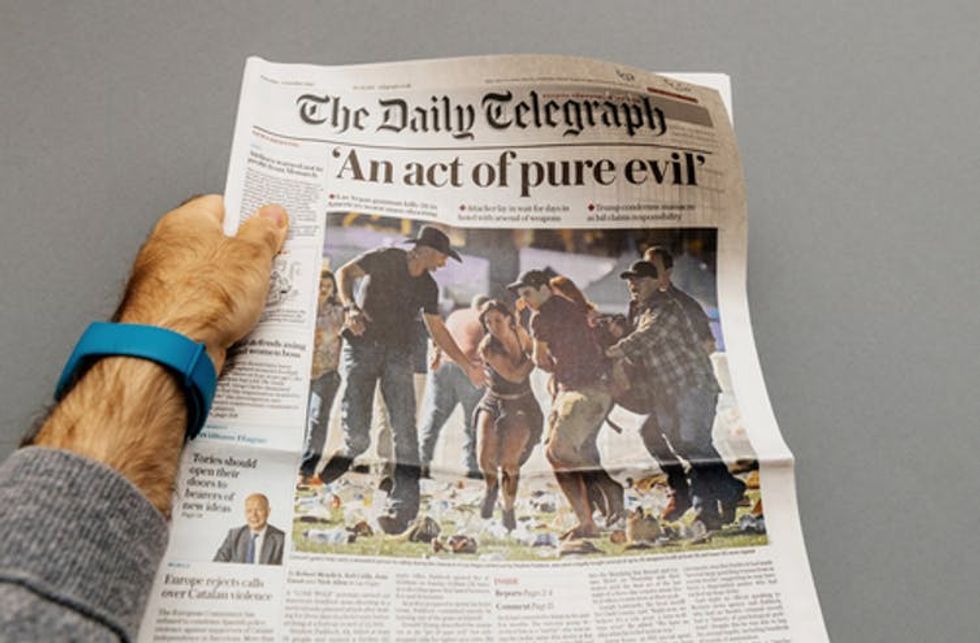 The Daily Telegraph front page of the shootings in Las Vegas on Oct 1, 2017.

I always say American cable news are "disaster pornographers.” When there is a mass shooting or a terrorist attack, they make sure to add enough dramatic tone to it to get all the attention for the duration of the time they desire. If there is one shooting in a corner of a city of millions, the cable news will make sure that you feel like the whole city is under siege.

Besides informing the public and logically analyzing the events, one job of the media is to attract viewers and readers, and viewers are better glued to the TV when their positive or negative emotions are stirred, with fear being one. Thus, the media, along with the politicians, can also play a role in stirring fear, anger or paranoia about one or another group of people.

When we are scared, we are vulnerable to regress to more tribal and stereotyping attitudes. We can get trapped in fear of perceiving all members of another tribe a threat, if a member of that group acted violently. In general, people may become less open and more cautious around others when they perceive a high risk of exposure to danger.

Is there a good side to it?

As we are used to happy endings, I will try to also address potentially positive outcomes: We may consider making our gun laws safer and open constructive discussions, including informing the public about the risks. As a group species, we are able to consolidate group dynamics and integrity when pressured and stressed, so we may raise a more positive sense of community. One beautiful outcome of the tragic shooting at the Tree of Life synagogue was the solidarity of the Muslim community with the Jewish. This is especially productive in the current political environment, where fear and division are common.

The bottom line is that we get angry, we get scared and we get confused. When united, we can do much better. And, do not spend too much time watching cable TV; turn it off when it stresses you too much.