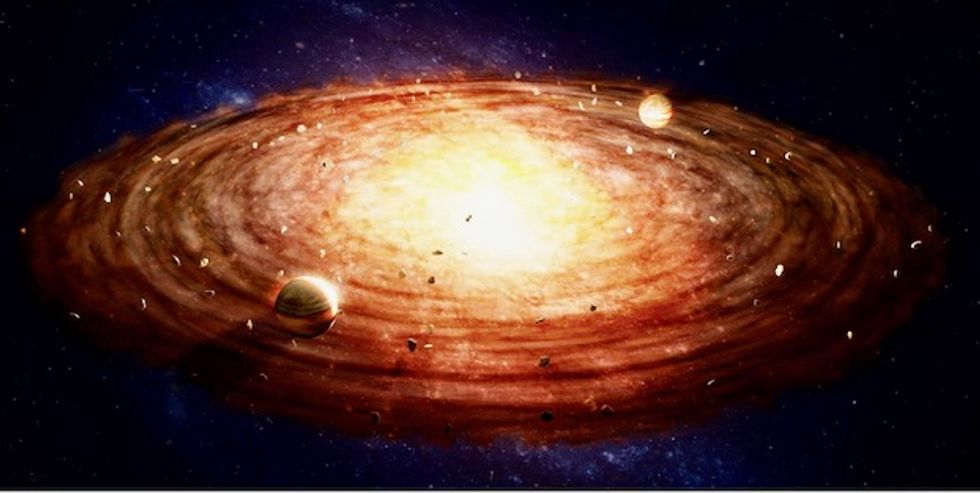 Planets form from a disc of dust orbiting a star. Mopic/Shutterstock.com

Stars are born when huge clouds of dust and gas collapse in on themselves and ignite. These clouds are made up of raw elements, like oxygen and titanium, and each cloud has a unique composition that imprints on the star. And within the stellar afterbirth – from the material that didn’t find its way into the star – planets are formed.

Finding planets orbiting distant stars, or exoplanets, is difficult. There are tried and true methods that involve using large telescopes to detect these tiny objects. But I’ve developed a faster and more powerful strategy for planet hunting that is based on the chemistry of the star. I am a planetary astrophysicist. Admittedly, this is a title that I made up because I wanted something that actually described what I do. I study the elements within stars, their patterns, and how they are connected to planets.

I created an enormous database of stars and their elemental compositions. Some of those stars have planets orbiting them; others don’t. When a star has an orbiting planet, it could be the smaller rocky type, a large gas one, or both. However, not every star can have a giant Jupiter-sized planets – since these planets require a huge amount of elements and materials to form.

Together with a small team of researchers from Arizona State University, University of California, Riverside, Vanderbilt University and New York University, I used software that searches for complex patterns within stellar data to figure out which stars are likely to have planets orbiting them based only on the star’s chemical composition.

Now, instead of looking through huge all-sky telescope surveys hoping to find a signature of a planet, my team can fast-track the discovery and characterization of planets by analyzing the composition of their host stars. Of the 4,200 stars that we analyzed, we found that approximately 360 stars have a greater than 90% chance of hosting a giant planet. Now we are working to get time on a telescope to test our predictions. 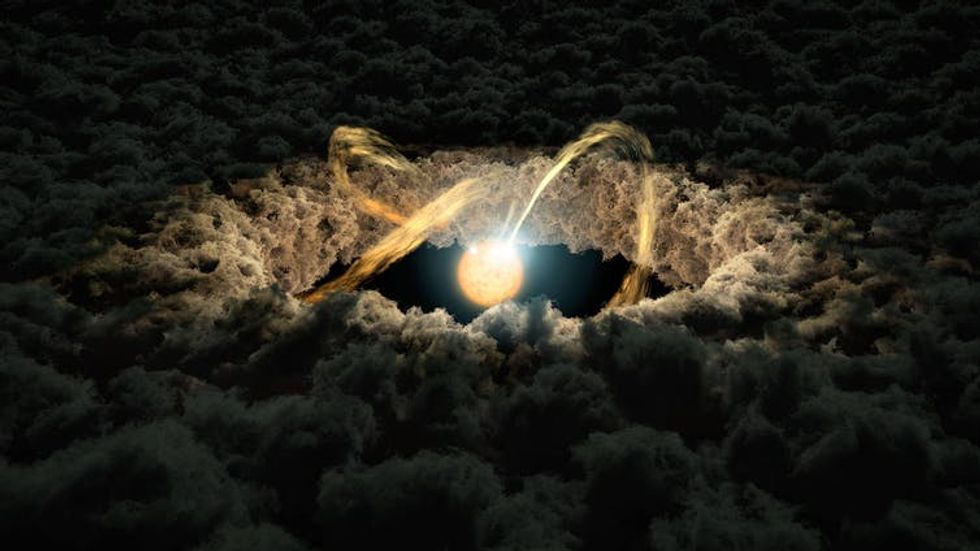 Stars and planets are chemically linked to one another, since they both form within the same molecular cloud. The raw ingredients within the planet ultimately creates an environment that’s ‘alive’ and conducive to life – or not.

The Hypatia Catalog and its elements

The algorithm we developed uses the chemical composition of stars that we know have orbiting giant planets to determine which combination of elements – or chemical fingerprint – is common to stars that host planets. My team then used this algorithm to look at the chemistry of stars not known to have planets to provide a prediction score that a star is likely to host a planet. 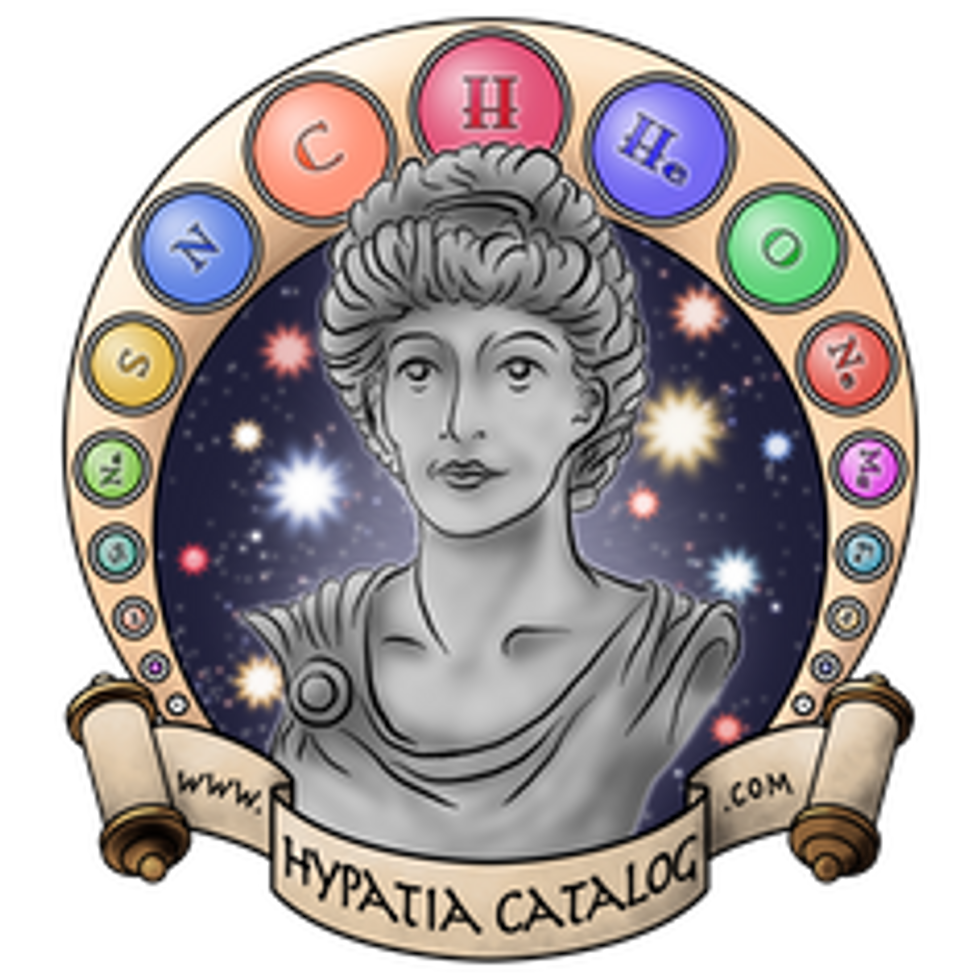 This is the logo for the Hypatia Catalog showing an artist depiction of Hypatia. Some of the most important elements in stars are listed along the outside.

Light shines from the interior of a star and is absorbed by atoms in its upper layer, creating a stellar spectra. The absorbed wavelengths reveal what type of elements from the periodic table are present. Using a technique called spectroscopy, scientists are able to measure the light from the star and measure the amount, or abundance, of those elements. I compiled the largest catalog of elements in nearby stars in the Hypatia Catalog. I named it to honor one of the first known female astronomers who was a powerhouse in 400 A.D.

I use the Hypatia Catalog to understand planets from a more chemical or compositional perspective. Each star is made up of different combinations and quantities of elements, which is reflected in the planets orbiting the star. There can be a huge variety in the chemical composition of planets from their interiors to their surfaces.

There are two primary techniques for finding or detecting exoplanets.

The first is the “radial velocity” technique, which detects when a star wobbles in the presence of a planet with a strong gravitational force.

Another strategy is to look for a “blip” in the light a star emits, which happens when a planet moves in front of the star (with respect to the Earth) and actually dims the stellar light. Both of these methods look for ways that the planet influences the star. However, it’s difficult to detect planets because they are so small compared with their star – it would be like trying to observe a person being influenced by a raindrop.

The radial velocity and “blip” methods look at the physical relationship between a star and a planet. These are important because they determine the temperature, orbit and dynamics that exoplanet scientists use to define whether a planet may be habitable. However, none of these detection methods take into account what the star and planet are made of. And yet, understanding the composition of the planet is vital to predicting whether it is habitable. 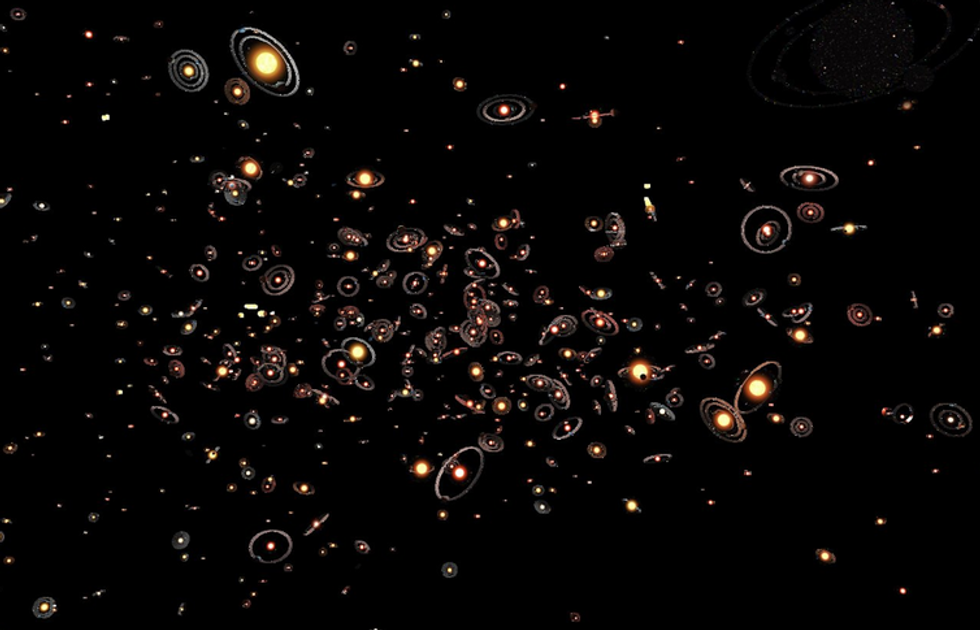 An artist’s impression of how common planets are around the stars in the Milky Way. The planets, their orbits and their host stars are all vastly magnified.

Planetary composition is key to habitability

The planet Earth is “alive” – it moves and shifts in a complex way. The surface conditions, like temperature and weather, are maintained by relying on the movement of the continents, for example by plate tectonics. The cycling of different elements or molecules, like the oxygen-carbon dioxide cycle, helps organisms breathe. In order for exoplanets to truly be habitable for life, basic elements must be present within the planet to make sure that these key processes happen.

We exoplanetary scientists don’t currently have the technology to directly observe the surface or interior of a planet outside of our Solar System. This is partially because planets are so small compared to their star, so we’d need high-powered telescopes. It is also because planets don’t shine or emit their own light.

Therefore, my colleagues and I use the stellar composition as a proxy for the planet’s makeup. The algorithm that we developed is a unique one, because it looks at the elemental link between a star and its planet from the very beginning. This makes the approximately 360 likely giant planet host stars we found even more remarkable, because they were identified by the chemical fingerprint.

As part of this research published in The Astrophysical Journal, we studied a variety of different elements, up to 16 at a time. We wanted to see how those elements influenced each other and which were the most important for planet detection and possible formation.

We found that carbon, oxygen, sodium and iron were the most important elements when predicting that a star had a giant planet. Carbon, oxygen and iron are all very important elements when it comes to building rocky and or gas planets. However, we were surprised to discover that sodium also seemed to be a critical ingredient of stars that form giant planets. Sodium is not considered to be a major planet-forming element within the Solar System.

For practical reasons we didn’t use the algorithm to look at Earth-like planets. Rather we focused our study, and trained our algorithm, on big gaseous planets where humans couldn’t survive. Most of the exoplanets that astronomers have discovered to date have sizes similar to Neptune or Jupiter because they are easier to detect.

However, as new missions like TESS and CHEOPS discover smaller, Earth-sized planets, we will have more data with which to train the algorithm to look for rocky planets like Earth.