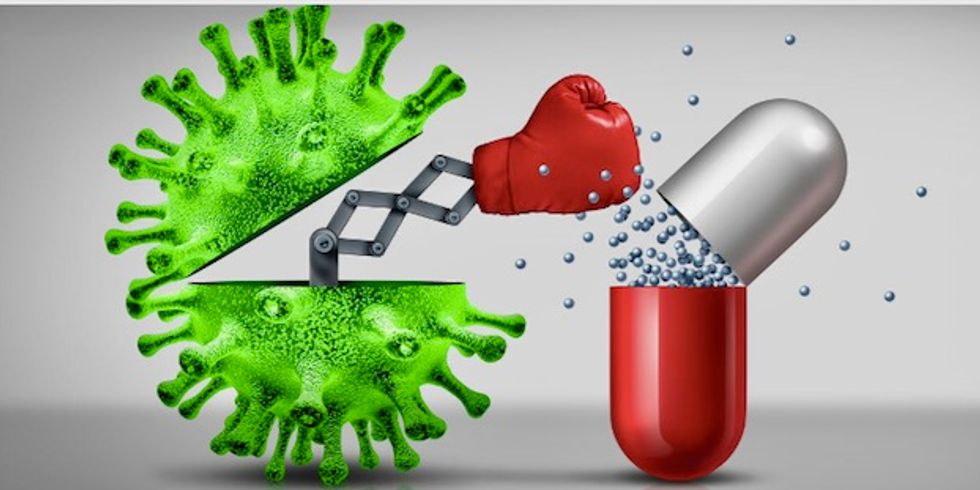 Antibiotic resistance can spread between microbes within hours. Lightspring/Shutterstock.com

Imagine a world where your odds of surviving minor surgery were one to three. A world in which a visit to the dentist could spell disaster. This is the world into which your great-grandmother was born. And if humanity loses the fight against antibiotic resistance, this is a world your grandchildren may well end up revisiting.

Antibiotics changed the world in more ways than one. They made surgery routine and childbirth safer. Intensive farming was born. For decades, antibiotics have effectively killed or stopped the growth of disease-causing bacteria. Yet it was always clear that this would be a rough fight. Bacteria breed fast, and that means that they adapt rapidly. The emergence of antibiotic resistance was predicted by none other than Sir Alexander Fleming, the discoverer of penicillin, less than a year after the first batch of penicillin was mass produced.

I am a bioinformatician, and my lab studies the evolution of bacterial genomes. With antibiotic resistance becoming a major threat, I’m trying to figure out how resistance to antibiotics emerges and spreads among bacterial populations.

Most antibiotics are naturally produced by bacteria living in soil. They produce these deadly chemical compounds to fend off competing species. Yet, in the long game that is evolution, competing species are unlikely to sit idly by. Any mutant capable of tolerating a minimal quantity of the antibiotic will have a survival advantage and will be selected for – over generations this will produce organisms that are highly resistant.

Resistance can and does evolve when bacteria are persistently exposed to a new antibiotic they have never encountered. Let’s call this the old-fashioned evolutionary road. Second, when bacteria are exposed to a novel antibiotic and are in contact with bacteria already resistant to this antibiotic, it is just a matter of time before they get cozy and trade genes. And, importantly, once genes have been packaged for trading, they become easier and easier to share. Bacteria then meet other bacteria, which meet more bacteria, until one of them eventually meets you.

Bacteria can evolve resistance to high levels of antibiotics in just days.

The rise and fall of sulfa drugs

For all their might, antibiotics are not the only substances capable of effectively killing bacteria (without killing us). A decade before the mass production of penicillin, sulfonamide drugs became the first commercial antibacterial agent. Sulfa drugs act by blocking an enzyme – called DHPS – that is essential for bacteria to grow and multiply.

Sulfa drugs are not antibiotics. No known organism produces them. They are chemotherapeutic agents synthesized by humans. No natural producer means no billion-year-old arms race and no pool of ancient resistance genes. We would expect bacteria to evolve resistance to sulfa drugs via the good old-fashioned way. And they did.

At odds with resistance

To answer this question our research team took sequences of sulfa drug resistance genes from disease-causing bacteria and compared them to millions of “normal” versions of the DHPS enzyme in nonpathogenic bacteria.

The team identified two large groups of bacteria that had DHPS enzymes resistant to sulfa drugs. By studying their DNA sequences, we were able to show that these resistant DHPS enzymes had been present in these two groups of bacteria for at least 500 million years. Yet sulfa drugs were first synthesized in the 1910s. How could resistance be around 500 million years ago? And how did these resistance genes find their way into the disease-causing bacteria plaguing hospitals worldwide?

The clues left in gene sequences are too fuzzy to conclusively answer the latter, but we can certainly speculate. The bacteria we identified as harboring these ancient sulfa drug resistance genes are all soil and freshwater bacteria that thrive under the well-irrigated subsoil of farms. And farmers have been adding huge amounts of sulfa drugs to animal feed for the past 50 years.

The sublethal concentrations of sulfa drugs in the soil are the perfect setting for resistance genes to be transferred from these ancient resistant bacterial populations to other bacteria. All it takes is for one lucky bacterium to meet one of these ancient resistant ones in the subsoil. They trade some genes, one bacterium to the next, and resistance spreads until a newly minted resistant bacterium eventually makes it to the groundwater supply you drink from. You do the math.

Nothing new under the sun

As for why sulfa drug resistance genes would be around 500 million years ago, there are two plausible explanations. On the one hand, it could be that 500 million years ago there was a bacterium that synthesized sulfa drugs, which would explain the evolution of resistance. However, the lack of remnants from such a biosynthetic pathway makes this unlikely.

On the other hand, resistant bacteria may have been around just by chance. The argument here is that there are so many bacteria, and such diversity, that chances are that some of them are going to be resistant to anything scientists come up with. This is a sobering thought.

Then again, this is already the baseline for antibiotics. Like climate change, antibiotic resistance is one of those problems that always seem to be a couple decades away. And it may well be. A turning point for me in the climate change debate was a decade-old opinion piece in New Scientist. It stated that we should make every possible effort to prevent climate change, especially in the unlikely case that it was not caused by man, because that would mean that all we can do is palliate a natural phenomenon.

Our research points in the same direction. If resistance is already out there, drug development can offer only temporary relief. The challenge then is not to quell resistance, but to avoid its spread. It is a big challenge, but not an insurmountable one. Not feeding wonder drugs to pigs would do nicely, for starters.

The killing of a 25-year-old, whose only crime was jogging while Black on the "wrong side" of town on the outskirts of Brunswick, Georgia, has been described as a lynching. That's not for dramatic effect.

Ahmaud Arbery's broad daylight killing was akin to a public execution committed by three white men who were clearly supremely confident of being afforded every protection by Georgia's legal apparatus.

Michigan Republicans are replacing lower-level elections officials with Donald Trump-loving conspiracy kooks, which could throw the next election into chaos.

The state was already a hotbed for conspiracy theories even before Joe Biden's election win, but there's been a hard-right turn since Trump's loss that has seen county-level officials at all shoved out and replaced by hyper-partisan Republicans -- sometimes under tremendous pressure, reported The Daily Beast.