Claiming Trump is forcing them to commit 'widespread violation' of international law, asylum officers back lawsuit against president's policy 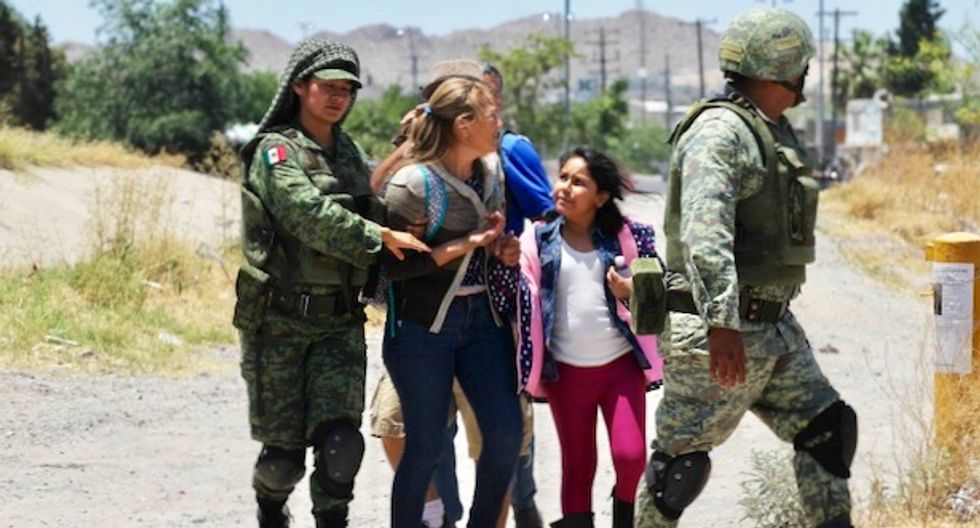 The law forcing asylum seekers to return to Mexico is "fundamentally contrary to the moral fabric of our nation and our international and domestic legal obligations," officers say

Expressing grave objections to an immigration policy which has forced them to violate international law, U.S. asylum officers filed a federal court brief demanding an end to President Donald Trump's so-called "Remain in Mexico" policy under which asylum seekers have been turned away at the U.S.-Mexico border.

Ordering people who are exercising their legal right to seek asylum to turn back and endure a months-long or years-long wait for their applications to be processed is "fundamentally contrary to the moral fabric of our nation and our international and domestic legal obligations," wrote the American Federation of Government Employees Local 1924, the union which represents asylum officers.

"By forcing a vulnerable population to return to a hostile territory where they are likely to face persecution, the MPP abandons our tradition of providing a safe haven to the persecuted and violates our international and domestic legal obligations."

The amicus brief was filed by the union in support of the ACLU, which is challenging the Remain in Mexico policy, officially known as Trump's Migrant Protection Protocols (MPP) program.

Since Trump enacted the program in January, the Mexican government says about 15,000 people have been sent to Mexico while their applications are processed. Human rights advocates have decried the policy, warning that asylum seekers may face violence in Mexico as many did in their home countries.

"By forcing a vulnerable population to return to a hostile territory where they are likely to face persecution, the MPP abandons our tradition of providing a safe haven to the persecuted and violates our international and domestic legal obligations," reads the brief.

Earlier this month, the president also reached a deal with Mexican President Andrés Manuel López Obrado, under which Mexico agreed to step up immigration enforcement in exchange for the cancellation of tariffs. Weeks later, police in Veracruz reportedly opened fire on a truck carrying Central American immigrants, killing a young woman.

When Trump enacted the MPP program, his administration claimed that if asylum seekers are allowed to wait in the U.S. while their applications are processed, they would "disappear into the United States."

In fact, the union noted, there is "no evidence" that asylum seekers pose any security risk.

Justice Department statistics indicate that 90 percent of people fulfill their legal obligations while awaiting asylum rulings in the United States.

"The MPP is entirely unnecessary," wrote the union. "The system has been tested time and again, and it is fully capable—with additional resources where appropriate—of efficiently processing asylum claims by those with valid claims while removing those that are not entitled to protection after they undergo the process designed to ensure that they will not be returned to a place where they will be persecuted."

By failing to adhere to the 1967 Protocol, the U.N. accord stating that participating countries including the U.S. would not "expel or return a refugee in any manner," wrote the officers, the Trump administration is compelling government employees to break international law.

"The MPP places [asylum officers] at risk of participation in the widespread violation of international treaty and domestic legal obligations," wrote the union, "something that they did not sign up to do when they decided to become asylum and refugee officers for the United States government."